Recent strengthening in some key US economic data has prompted many economic commentators to suggest that the US economy may have entered upon a self-sustaining growth path. We suggest that fluctuations in macro data mirror fluctuations in money supply. We also maintain that on account of time lags the present strength of economic data reflects the strong growth momentum in our monetary measure AMS during January 2008 to August 2009. However, a fall in AMS growth momentum during August 2009 to June 2010 is expected to exert downward pressure on economic data in the months ahead. What matters for self-sustained economic growth is not an expansion in consumer outlays as such but an expanding pool of real savings. Loose fiscal and monetary policies, however, damage this pool and thereby weaken the structure of production and in turn the prospects for meaningful economic recovery. On account of prolonged loose fiscal and monetary policies the US economy might have entered a stagnant and non-self sustaining growth path. In the meantime, the past money supply rate of growth continues to push China’s rate of price inflation higher. The same thing is currently observed in the UK and the Euro-zone. 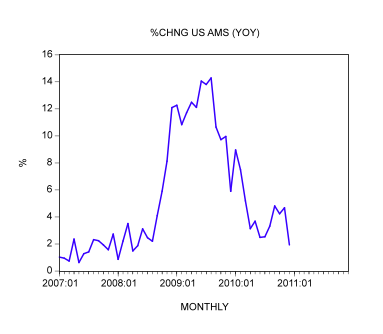 Past money growth behind present strong US data

An increase in industrial production of 0.4% in November (after falling by 0.2% in October) coupled with strengthening last month in industrial capacity use to 75.2% from 74.9% in October has prompted many economic commentators to suggest that the US economy may have entered a self-sustaining growth path. This is supposed to mean that loose monetary and fiscal policies at long last are starting to work. That this could be the case is also reinforced by a gauge of manufacturing in New York State. The New York Fed’s “Empire State” index climbed to 10.57 in December from minus 11.14 in the previous month. Furthermore, the composite index of leading indicators increased by 1.1% in November from 0.4% in October. 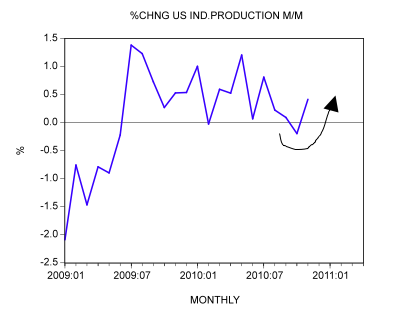 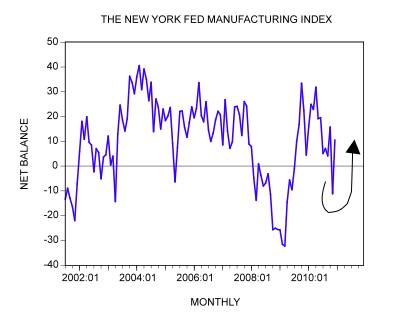 Now in terms of its growth momentum industrial production actually shows weakening. Year-on-year the rate of growth eased to 5.38% in November from 5.5% in the previous month and 8.3% in June. 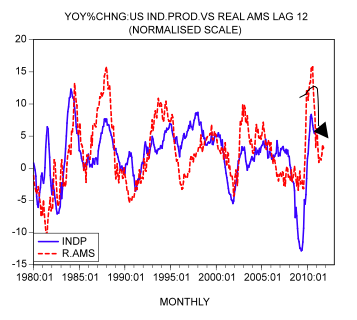 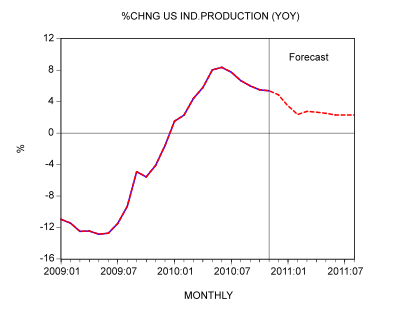 Hence a loose monetary policy that manages somehow to lift consumer sentiment is seen as pivotal in the strengthening of consumer spending and hence economic growth. On this score an increase in the Reuters/University of Michigan US consumer sentiment index to 74.2 in December from 71.6 in the month before has further reinforced economists’ belief that the economy has entered a self-sustaining growth path.

We suggest that despite a strengthening in consumer sentiment a fall in the growth momentum of AMS during August 2009 to June 2010 is still likely to depress the yearly rate of growth of consumer spending. The yearly rate of growth of retail sales eased to 7.7% last month from 8% in October – our monetary analysis points to a likely weakening ahead in the growth momentum of retail sales. 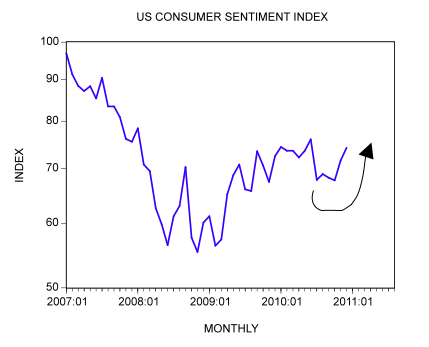 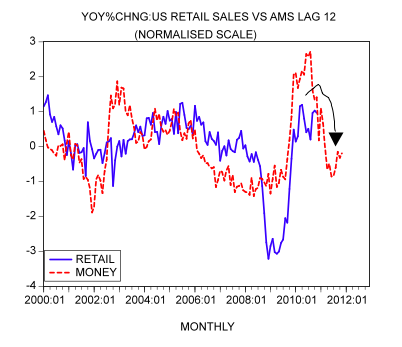 What matters for self-sustaining economic growth is not an expansion in consumer outlays as such but an expanding pool of real savings. It is real savings that funds economic activity. Without real savings it is not possible to upgrade and maintain the production structure that generates goods and services to maintain people’s life and well being. If over time more and more wealth is diverted from wealth generating activities towards non-productive wealth destructive activities the production structure comes under pressure and the production of wealth follows suit. Various loose fiscal and monetary policies make things much worse since these policies continue to encourage non-wealth generating activities (bubble activities). The damage that these policies inflict on the production structure tends to show itself after many decades (hence why it is labeled a ‘structural’ issue). It takes many decades to severely damage the infrastructure.

Government claims on real savings have continued to expand rapidly. Federal outlays have increased by 18.2% in 2009 from 2008. Since 2000 government outlays have increased by 97%. Furthermore, the government debt to GDP ratio climbed to 91.9% in Q3 from 90.6% in the previous quarter and 84.4% in Q3 last year. Also the budget deficit as a percentage of GDP jumped to 10% last year from 3.2% in the year before. 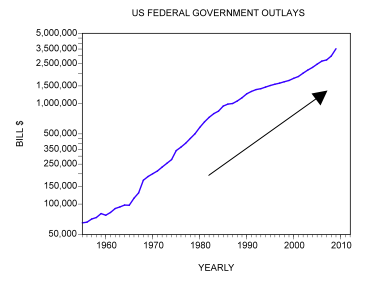 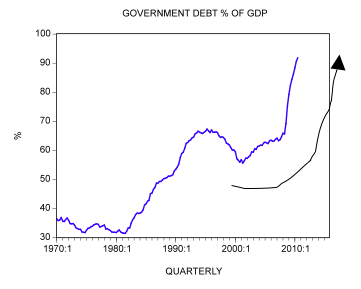 After reaching 19% in May 1981 the federal funds rate target has been trending down, falling to the current level of around 0.25%. In response to the loose monetary policy of the US central bank the ratio of our monetary measure AMS to its trend for 1959 to 1979 jumped from 1.0 in March 1980 to 1.57 by January this year before settling at 1.54 in November. Needless to say that such massive pumping coupled with the aggressive lowering of interest rates and loose fiscal policies caused a severe misallocation of real savings and have thus severely damaged the wealth generating process. 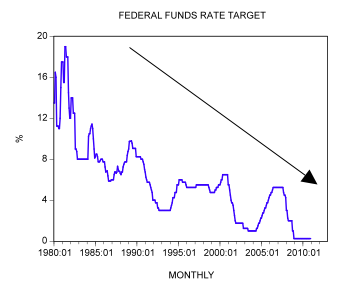 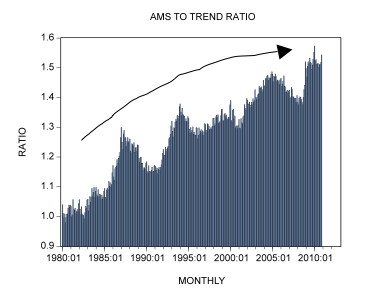 We suggest that on account of all this there is a high likelihood that structural issues will continue to dominate the economic scene in the months ahead. The more aggressive the Fed is going to be in “fighting off” the structural issues the more damage it is going to inflict – thus prolonging the economic slump. Note again that rallies in various economic indicators will just mirror monetary pumping. This, we suggest, would mean more bad news for the production structure and hence for the wealth generating process.  We can conclude that contrary to popular thinking the US economy is far from being on a self-sustaining economic growth path. If anything there is a growing likelihood that the US economy has entered a stagnant or declining growth path.

A low rate of inflation remains a worry for Fed officials

Fed officials still remain concerned with the durability of the so-called economic recovery. In particular what worries them is the fact that the growth momentum of the consumer price index (CPI) remains subdued. Year-on-year the rate of growth fell to 1.1% in November from 1.2% in the month before – well below the unofficial target of 2%. According to Fed officials the lower the yearly rate of growth of the CPI falls the much harder it becomes to navigate the economy. For instance, let us assume that Fed policy makers have reached the conclusion that in order to revive the economy real interest rates must be lowered to a negative figure. This, however, may not always be possible to achieve, so the argument goes.

we can derive that when the rate of inflation is very low it can create problems. Suppose that on account of weak aggregate demand inflation has fallen from 2% to 1%. Within this set-up the central bank can only target a real interest rate of -1%.  It cannot aim at a lower real interest rate since this would imply setting nominal interest rate below zero (-1%=0%-1%). In order to target a real interest rate of –1.5% the nominal rate must fall to negative 0.5% (-1.5%=-0.5%-1%). Hence, it is argued, the policy of price stability must aim at a certain level of inflation which will give the central bank the flexibility to keep the economy on a growth path of economic prosperity. So what should this level of inflation be? Some experts are of the view that 2% to 3% is the best range. (Fed officials are of the view that 2% is the right figure). The essence of all this is that a little bit of inflation is a must in order to have economic prosperity and stability. According to this way of thinking the inflationary buffer must be big enough to enable the Fed to maneuver the economy away from the danger of deflation, or so it is held.

So from this perspective the Fed is likely to continue with its stimulus package of $600 billion. In the week ending December 15 the Fed’s balance sheet increased by $3.466 billion to $2.388 trillion. The yearly rate of growth of the balance sheet rose to 6.8% from 6.4% in November. 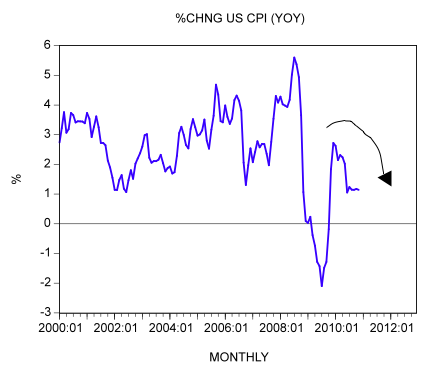 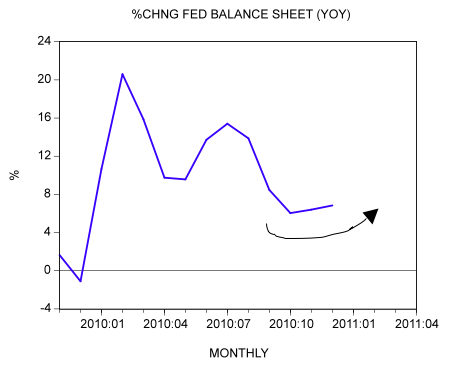 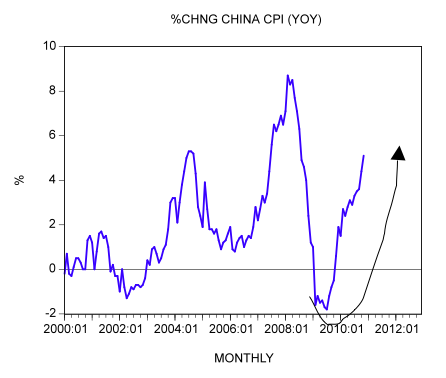 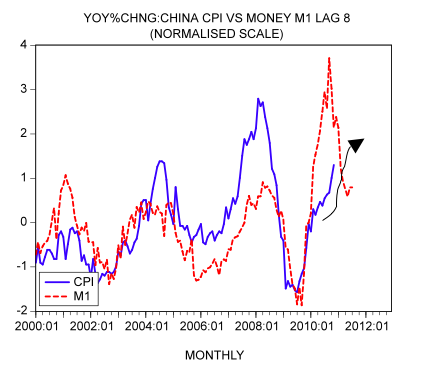 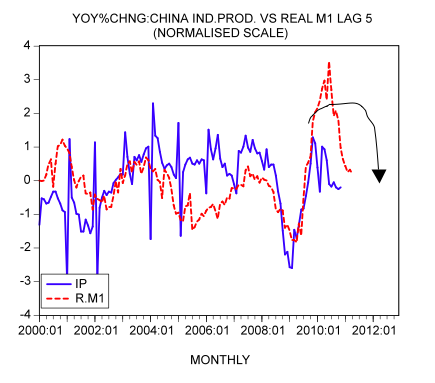 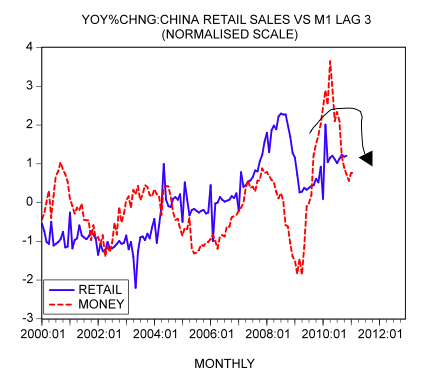 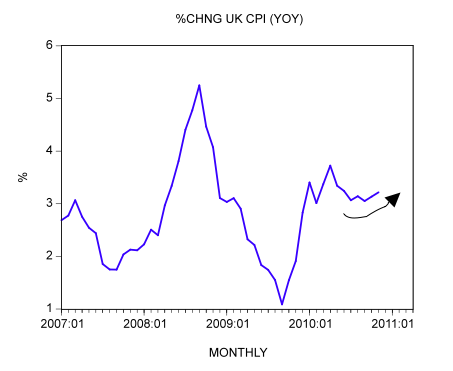 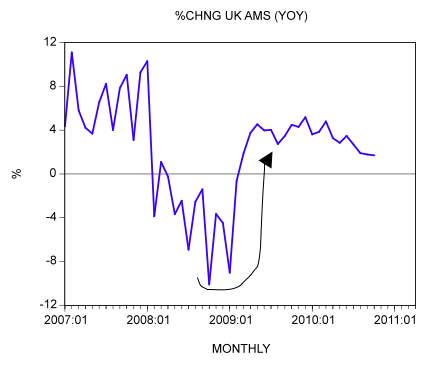 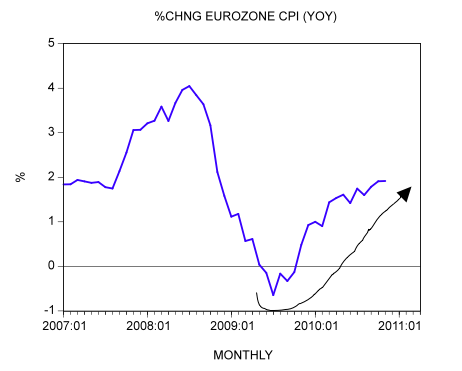 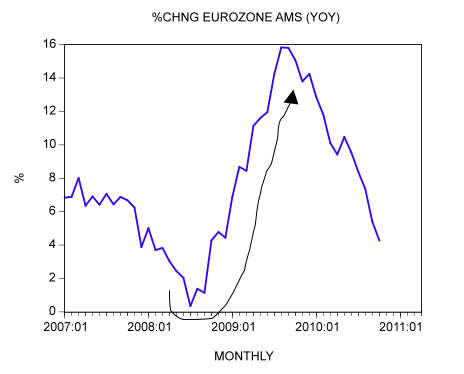 2 replies on “Has the US economy entered a self-sustaining growth path?”