(All coins are equivalent to one twentieth of a GBP pound sterling, 5p today)

Over the Christmas holiday while tidying up I came across some old coins left to me by my late grandmother. The coins are just a general collection of ones found in general circulation, so not much in numismatic value. What I was taken with was a few old shillings nearly spanning 100 years from 1916 to today. The old shilling, now 5p had also shrunk. That brought back to me a memory from 1974 where I spent the Summer in a student job giving change in a foreshore bingo in Scarborough. At that time the application of Gresham’s law was in full force. This law states that bad money drives out good. In this case the silver coinage, the ones which contained real silver, were being taken out of circulation as fast as people, who knew what they were looking for, could find them. Why were they being taken out of circulation you may ask? Pre 1920 silver coins were sterling sliver (note the word Sterling) that was 92.5% silver content. Silver coins 1920 to 1946 (pre 1947 silver) contained 50% silver. A premium was paid for any real silver coin at 3 to 7 times face value, free money so to speak. Over this 2010 Christmas holiday the spot price of silver had reached it’s highest point since the 1980 high of $50. Using the 31 Dec 2010 spot price of $30.75 (£19.87), here’s what my shillings (left to right) are worth:

Not only has the money shrunk in size, it also shrank in value. The whole point of coins and money is that they must cost less to produce than the face value stated on the coin or else Gresham’s law comes into effect and that money, the one of value, the ‘good’ money, is taken out of circulation.

At the time in 1974 all one had to do was collect these coins, and when you had  enough you went along to a coin or other such shop where you exchanged them: pre 1920 coins for 7 times face value, and pre 1947 ones for 3 times face value. The shop I used was in a parade of shops by the Victorian Grand Hotel overlooking Scarborough’s South Bay.  In the Summer of 1974 these coins were becoming scarcer and scarcer. While these coins may look quite similar it was quite easy with practice to tell the difference between these coins, even on a counter at 5 paces. Certain customers never had such quick and prompt service if tendering the right year of silver coin. A game on the bingo was sixpence (6d old, 2.5p new) so there was the odd pre ’47 sixpence in the float, however the manager filtered these first and had a glass jar filling up for himself. After 8 weeks and many hours of change giving I managed to collect just over £7.00 worth. I wish I still had them.

This experience instilled in me a sense of the precious metal history of money. The generic terms are still there, in silver for coinage and Pound Sterling for instance. Also, when I started to read up on the current financial crisis, no-one had to explain to me that gold and silver have a monetary past and the benefits of holding them. 8 weeks in 1974 searching for the good money in the bad had done its work. Incidentally, in that same summer I worked from 9:00am to 9:00pm 6 days a week for £4.00 a day, this morning my student daughter worked 3 hours and earned the same as I took home in a week. I also remember that most other jobs at that time for students paid 35p an hour; students could also sign on the dole if not working for around £6/7 a week.

Just how has inflation affected the UK currency over the years. In graphical form this is well illustrated here 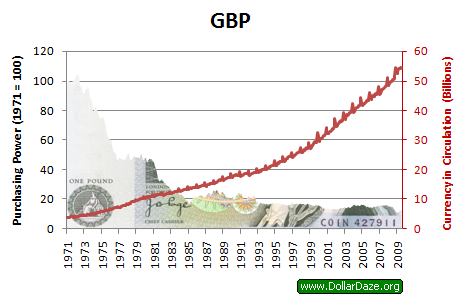 (the pound has declined so quickly that the note is hardly recognisable, even to those who remember it)

This document only goes up to 1998, but taking an inflation rate of 4% up to now, just devalue 1998 figures by 60-70% to get current value. The loss of value of the £ is tracked quite well in the face value and content value of these silver shillings.

I hope this article demonstrates the shrinking value of money over time. Who does this hit hardest? It hits those reliant on fixed income, pensioners and savers. It is an insidious stealth tax on saved wealth which is not tax deductible. This has been recognised by governments through the ages. Inflation is the destruction of the value of money; the symptom is overall rising prices. The switch from thinking in terms of rising prices, to the falling value of a currency, is a better way in understanding the process of inflation.

You will have seen in this article an illustration of shrinking money. The shrunken 5p is not the end of this. Ask yourself how often do you use debit or credit cards, electronic transactions.  I will leave you with this question, what value will the 2011 electrons or magnetic domains have on a computer hard drive in 95 years time?

Even more to the point, what value will a 92.5% 1916 silver shilling have, on that date in 2106? (also think of how much more debt the government will have borrowed by that date, and if the last load of debt was ever paid off, inflated away or defaulted on)

Today there will be no wheelbarrows; money is created simply by entering keystrokes on a computer keyboard. Money created from nothing, from thin air, but that is how banks have always created it… ad infinitum by fractional, now fictional reserve banking, until there is so much it no longer has any value.

A few quotes from the past on debt and deflation

Lenin is certainly right. There is no subtler or more severe means of overturning the existing basis of society (destroy capitalism) than to debauch the currency. The process engages all the hidden forces of economic law on the side of destruction, and it does it in a manner which not one man in a million is able to diagnose

– John Maynard Keynes, The Economic Consequences of the Peace.

The abandonment of the gold standard made it possible for the welfare statists (government bureaucrats) to use the banking system as an unlimited expansion of credit. In the absence of the gold standard, there is no way to protect savings from confiscation through inflation… Deficit spending is simply a scheme for the “hidden” confiscation of wealth. Gold stands in the way of this insidious process.

Owners of capital will stimulate the working class to buy more and more of expensive goods, houses and technology, pushing them to take more and more expensive credits, until their debt becomes unbearable. The unpaid debt will lead to bankruptcy of banks, which will have to be nationalized, and the State will have to take the road which will eventually lead to communism

Written By
Alan Hamilton
More from Alan Hamilton
A new film is to be released on the 15th of April:...
Read More

One reply on “Incredible shrinking money”