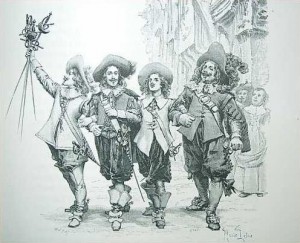 The excellent Mr Liam Halligan is back on form again with another superb article in today’s Sunday Telegraph.

In a smörgåsbord of delights, let me tempt you with a few tasty titbits:

“For more than two years now, opinion formers in the UK and elsewhere have been transfixed by City bankers and their academic lackeys who’ve argued that, far from inflation, we face “deflationary” dangers instead. Their cure, conveniently, has been for central banks to “print money”, issuing electronically-created credits then using them to bail-out said bankers. Such “quantitative easing” has also, handily enough, helped cash-strapped governments as the credits have similarly been employed to buy sovereign debt to fund “Keynesian” fiscal boosts.”

D’Artagnan would have been proud of that thrust. Porthos would like a stab too:

“Inflation won’t only mean that the Bank of England has to raise interest rates, compounding the difficulties of Britain’s highly indebted consumers. Rising price pressures also make it harder to justify more QE – not that it was justifiable in the first place, at least not to anyone with the capacity for independent thought.”

Not to be outdone and swishing in with his own sabre, Athos swings over the balcony with this:

“So the credit crunch, along with the deepest Western recession in generations, wasn’t the result of regulatory myopia and massive financial fraud. It has nothing to do with the Western world keeping interest rates too low for too long, or our governments and citizens spending like crazy, gorging ourselves on debt. The “global imbalances” thesis says it wasn’t us, it was “them” – China and all those other cheating Eastern countries that had the audacity to produce and extract goods the rest of the world wants, run current account surpluses and build themselves a platform of economic stability.”

And finally, Aramis ducks under the crashing chandelier with this tangential coup de grâce:

“Within the next 18 months, at least one peripheral country will leave the euro and Germany will do nothing to stop that. And once that’s happened, it could be followed by several more.”

All in all, and one for all, another splendid jaunt from the pen of Mr Halligan.

One reply on “Liam Halligan: Our currency has gone West and stagflation will soon be upon us”