In his speech at the National Press Club, Washington, DC on February 3, 2011 the Federal Reserve Board Chairman Ben Bernanke repeated that the loose monetary policy of the US central bank is aimed at stimulating domestic growth. Also last week the Fed Chairman reiterated that the economy still needs help, hence this is why the US central bank must continue with its monetary pumping.

According to Bernanke monetary pumping through the lowering of the interest rate structure contributes to an easing in broader financial conditions. This in turn bolsters household and business spending thus lifting economic growth.

All that such policy can do is to set in motion a process of diversion of real savings from wealth generating activities to useless non-productive activities. Such policies can appear to be successful in terms of monetary expenditure and misleading price deflators that generate a misleading measurement of the state of the economy labelled as real gross domestic product. (Note that most so-called key economic indicators are derived from the monetary expenditure data).

Observe that as the pool of real wealth expands, individuals tend to allocate a larger portion of their wealth towards the buildup of the infrastructure – individuals raise their preference towards future goods versus present goods. This increase in time preference towards future goods versus present goods is reflected in the lowering of the interest rate structure. As one can see, interest rates are just an indicator – they are just a manifestation of individuals’ time preferences.

We are not entirely sure whether we have currently reached this stage. All that we can suggest is that the longer Bernanke continues with his loose monetary stance the greater are the chances that he will succeed in severely damaging the process of real wealth formation.

In the same speech Bernanke also argued that it is unfair to attribute the strong increase in commodity prices on US monetary policy. He suggests that the main reason for higher prices is the improvement in living standards in emerging economies.

As a result, argues Bernanke, people’s diets are becoming more sophisticated and consequently their demand for food and energy rise.

We suggest that world commodity prices in US dollar terms had to go up in response to the massive monetary pumping of the US central bank. After all, a price of a good is the amount of dollars paid for the good.

To suggest then that US loose monetary policy has nothing to do with strong increases in commodity prices is extraordinary.

We pay very close attention to oil prices and other commodity prices because they do present clearly two kinds of risks. The first is that higher oil prices are kind of a tax. We are trying to stimulate the economy. We are trying to get consumers to become more confident, be able to spend more, and to help put people back to work. To the extent that part of their income gains are drained away by higher gas prices, for example, that’s going to be negative, that will slow the recovery. So as international factors lead to higher oil and commodity prices, that is definitely a negative from the perspective of consumers and household budgets and economic growth.

Again we suggest that the increase in commodity prices in US$ terms is on account of massive monetary pumping by the Fed and not on account of some international factors.

It is monetary pumping that impoverishes US consumers – pushing more money to make consumers to boost their spending amounts to the strengthening of the process of impoverishment through the diversion of real savings from wealth generating activities to non-productive useless activities. Note again that such activities emerge on the back of loose monetary policy, i.e. monetary pumping and the artificial lowering of interest rates.

In comparison to previous speeches, in the February 3 speech the Fed Chairman appears to be more optimistic on the prospects for economic growth.

Overall, improving household and business confidence, accommodative monetary policy, and more supportive financial conditions, including an apparent increase in the willingness of banks to make loans, seems likely to lead to a more rapid pace of economic recovery in 2011 than we saw last year.

So why are Bernanke and most mainstream economists of the view that monetary pumping can somehow grow the economy? The main reason for that type of thinking is the belief that somehow an increase in general demand for goods and services on account of monetary pumping could set in motion the process of real wealth formation, i.e. an increase in real economic growth.

We maintain that an increase in demand by itself cannot activate the process of real wealth generation. Without the increase in the pool of real savings that funds the production of tools and machinery the key for the production of real wealth, no economic growth can emerge. All that boosting consumption by artificial means will achieve is a diversion of real funding from wealth generating activities to non-productive activities.

Note that we are not against an increase in consumption as such, after all the goal of every act of production is consumption. All that we are saying that every increase in consumption must be funded by a corresponding increase in real funding. In this sense it is not possible to replace real funding by pieces of paper money. If it could have been done, then scarcity would have been erased a long time ago. In this sense, fully backed or productive consumption is always good thing. Observe, however, that this is not what Bernanke and mainstream economists are saying. They imply that something can be generated out of nothing – out of “thin air”.

From this perspective we find it extraordinary when Bernanke last Wednesday warned against sharp cuts in US federal government outlays. Bernanke is of the view that such cuts whilst the economic recovery is still fragile could severely undermine real economic growth. We suggest that on the contrary wealth generators will find it much easier to operate with fewer government burdens on them. In similarity to the effect of monetary pumping, loose fiscal policy leads to the diversion of real savings from wealth generating activities to non-productive government sponsored activities. In the meantime, the January budget deficit widened to $49.8 billion from a deficit of $42.63 billion in January last year, the second-largest deficit on record for the month. The 12-month moving average of the budget stood at a deficit of $107 billion in January against $106 billion in the month before. 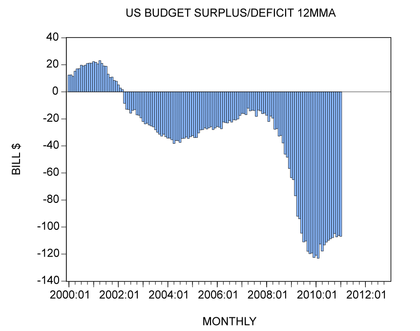 4 replies on “Do the Fed Chairman’s comments on the economy make any sense?”