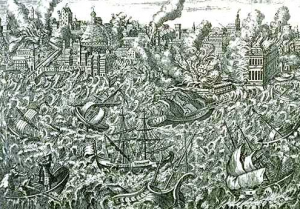 You might remember a post, a month or two back, about the Davos plan to flood the world with $100 trillion dollars of new fiat paper currency, in a global quantitative easing plan. This would keep the 1971 experiment of a pure global fiat currency scheme going for a few more years and replace all of the real Austrian productive capital which has been consumed in the last 40 years (e.g. tangible machines which make things), with even more paper Keynesian ‘capital’ (i.e. bits of fancy paper, or their electronic equivalent) to drown us all in; or, in the words of Del-Boy Trotter, we’re all going to be millionaires.

Jim Rickards thinks he has detected the IMF plan to put this Davos proposal into action. He discusses this discovery in a 22-minute interview with Eric King, as below. With many other interesting topics under debate, the discussion on Davos and its subterranean link to the IMF begins at 5:35 on the clock:

Here is that IMF plan, in PDF form:

[You will also notice that it is dated January 7th, 2011, which is several weeks before the Davos announcement.]

As you might imagine, the IMF web site is hardly user-friendly when it comes to revealing such potentially devastating informational nuggets, only matched in its obfuscation and denseness by the Bank of England’s web site; however, with some karate-style googling technique, I eventually managed to ensnare the needle in the haystack.

Here is the key IMF quote, from that paper:

“An annual allocation of the equivalent of US$200 billion dollars would raise SDRs as a proportion of reserves to a little over 13 percent in the early 2020s.”

If you use fractional reserve banking at a 10% ratio to leverage this by ten, then this becomes $2 trillion pumped into the global economy each year, until 2025, giving us $28 trillion equivalent-dollars of extra fiat ‘liquidity’.

I think we can apply the Duncan’s First Law of Government to that — by which you take any publicly-released government number and multiply it by three or divide it by three, whichever presents a worse public relations figure, to produce the true number, as originally calculated by whichever dissembling civil servant first wrote the report.

With the IMF able to switch currencies around inside their SDR currency unit — for instance by dialling down the dollar component and replacing it with Chinese yuan — then welcome to the world’s new global fiat currency, born on a wave of enormous quantitative easing, courtesy of shadowy unelected bureaucrats being paid tax-free salaries and handsome pensions, paid from your pocket, and ensconced in luxurious office palaces all over the world.  They are, after all, only thinking of you and your interests, rather than putting themselves and their friends first.

Once the cuckoo of the SDR has pushed the dollar out of the world-reserve-currency nest, the IMF can then roll out their even grander strategic plan of introducing the Bancor, as first proposed by their hero, Lord Keynes, as discussed in one of their papers from last April:

Here’s a sample quote from that report (my emphasis):

“A limitation of the SDR as discussed previously is that it is not a currency. Both the SDR and SDR-denominated instruments need to be converted eventually to a national currency for most payments or interventions in foreign exchange markets, which adds to cumbersome use in transactions. And though an SDR-based system would move away from a dominant national currency, the SDR’s value remains heavily linked to the conditions and performance of the major component countries. A more ambitious reform option would be to build on the previous ideas and develop, over time, a global currency. Called, for example, bancor in honor of Keynes, such a currency could be used as a medium of exchange—an “outside money” in contrast to the SDR which remains an “inside money”.”

We truly are alive in a world of Golgafrincham money cranks, who think there is not a disease on Earth which cannot be cured by the application of ever-more endless sheets of worthless paper, printed up with ever-more inky zeroes.

Have you bought any gold, silver, or oil, this month?  Do you think you should?

According to the popular way of thinking, various economic data can provide an analyst with the necessary information regarding the state of the economy….