As I expect many readers of this site will know, a debate has begun between the Austrian Economist Robert Murphy and the “Quasi-Monetarists” Scott Sumner, David Beckworth and Bill Woolsey. I encourage Cobden Centre readers to have a look at the contributions of both sides; both contain a great deal of insight, and unlike debates with Keynesians, this one is generally civil. My own view is a bit different to that of either side, but that’s not what I’m writing about here. Some commentators think that the argument can be resolved by looking at the “barrenness” of money. Unfortunately, life isn’t so simple.

Money plays no direct role in satisfying human needs, for this reason the Classical Economists would say that money is “barren”. This is best explained with a hypothetical example. Consider a closed economy that uses only gold coins as money, perhaps an isolated island hundreds of years ago. Suppose that initially there was one ton of gold on the island; long ago all of it was mined out and made into coins. All of the prices on the island could be stated in ounces of gold. Then over time this economy grows and the wealth of the island’s inhabitants changes.

Now, suppose that instead of one ton of gold the initial stock had been two tons and again all of it was minted into coins. In this case would the development of the island’s economy have been different? Clearly prices would be different but that doesn’t mean that anything else would be. Money isn’t an input to any production process. Nothing is made out of money; each person receives money, keeps it for a while and passes it on. As Toby Baxendale often reminds us, wealth is only created when businesses make more or better goods and services. So the absolute amount of money isn’t important. For metallic money there are issues of practicality if coins must be very small or very large which can cause extra costs in handling money. But apart from that, nothing else can cause a difference between the path the economy would take with one ton and that with two. This barrenness applies to all types of money.  It doesn’t apply to commodities that can be used to mint money, though. Gold isn’t barren since it’s an input into many industries. The use of money instead of barter confers many advantages on society, the lowering of transaction cost, for example. If the island had started out with no monetary economy then it would not have done as well, but if there is a monetary economy then money is barren in the sense described here. Mises explains all this in several places, for example in “The Theory of Money and Credit” p.238-239.

Fluctuations in the quantity of money are a more complex subject, as are fluctuations in prices and demand for money. The fact that money is barren doesn’t tell us everything we need to know. Let’s suppose that our island economy adopts a central bank and that it changes to using fiat currency rather than gold. The Central Bank decide on an unusual monetary policy. At the beginning of the first month the price level is 100. The Central Bank raise it to 200 by the end of the third month. They then make it fall back to 100 by the end of the sixth month. The Central Bank forces the price level to follow the graph below: 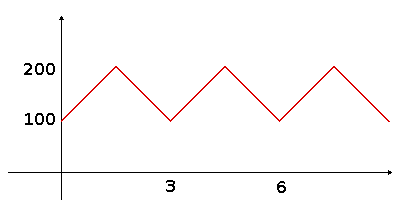 The Central Bank don’t tell anyone about their plan, they just start issuing new money at the beginning of the first month. What I want to ask here is: could this have no direct effect on the economy? The money that the central bank creates isn’t the input to any production process but its injection into the economy does change incomes and prices, and its subsequent withdrawal does too. In the previous example there was no proper change at all in the quantity of money. In the first case there was one ton of gold at the start and in the second there were two tons, but there was no transition between there being one and two. The examples were conceptually separate.

If monetary changes are very, very gradual we could expect little effect, but we can’t expect that if they aren’t. Roger Garrison gives a useful analogy here. Suppose that someone saws a plank of wood into pieces. The sawing may stir up sawdust into the air and make people cough, but once the sawing is done the dust will settle again. At the beginning when the plank is whole there won’t be any sawdust in the air, and all the sawdust will be on the floor soon after the cutting has finished. But, no one can prove that sawdust isn’t a problem by pointing to the time before the sawing and then pointing to another time afterwards.

Redistribution is perhaps the most obvious consequence of money creation. If a government creates new money it can spend it as it likes, enriching certain groups while diminishing the value of existing stocks of money. Some economists hold that in an unhampered economy redistribution would be the only effect, though that redistribution would have negative consequences later. According to this view there would be no immediate fall in output. I would like the reader to look at the graph above and think about it using common sense rather than any economic theory they’ve learned. How could this “Monetary Policy” not cause chaos? And how could it not cause real output to fall soon after it began?

The issue here is that prices take time to change. This simple fact seems to cause an enormous amount of stress in discussions about economics. Some people call it “price stickiness” and say it’s a “market failure”. Others deny that price stickiness can occur in an unhampered economy. The only way that prices could change to immediately reflect all new information would be if every trade involved haggling. Thankfully, this isn’t the way things happen: when I buy a cup of tea in a cafe I don’t have to bid for it. One reason for this is that auctions are costly and changing prices is costly. Changing prices isn’t just costly in terms of physical resources; more importantly, it takes time for the entrepreneurs, managers and customers involved, time that may be better spent on other things. To some extent delays are cumulative: when a business input prices change it generally won’t change it’s output prices straight away, so if there are many stages of production a change will take longer to feed through.

None of this damages the argument against state support of Trade Unions. Cafes charge fixed prices for drinks because nobody would go to a cafe where they have to haggle. Jobs usually pay fixed hourly wages or salaries because employees prefer the security of those systems to piece-rate or other systems. Businesses that provide some stability in their prices may in many cases do better because of the predictability this provides to the customer and the cost saving to the business. All of the situations mentioned here are competitive.  If more rapidly or more slowly changing prices would work better, then competition would provide them. But if a government supports a union, by banning employers from sacking striking workers for example, then they are tilting the scales of competition in order to benefit members of the union at the cost of everyone else.

What would happen if a Central Bank followed the policy above is that there would be a short lived boom at the beginning before everyone realises they have to increase their prices. Austrian Business Cycle Theory indicates that this boom would be unsustainable if it continued. But before it has a chance to get to that stage, the Central Bank starts reducing the price level, and then a bust will occur. The temporary boom occurs because prices can’t rise quickly and the bust because they can’t fall quickly. Neither will be beneficial and both will harm the economies ability to economize on scarce resources (On this see Mises’ essay “The Non-Neutrality of Money”).

Money is said to be “non-neutral” because monetary forces can have an effect on output.  Money isn’t a “veil”. Despite what Keynes wrote, most of the economists who studied the business cycle before him didn’t think that it was. If prices can have an effect on output then changes in both directions must have an effect, both price inflation and price deflation. If the crazy monetary policy described above would change output then so would any smaller, more normal change that occurs in real life.  The difference is one of degree. Deflation, especially if it is large, can’t be exclusively good.

Some Austrian Economists believe that if there is deflation after a bubble of some sort has burst, then this provides “purging” and aids restructuring. I don’t agree with that theory, and it would take too long to go into that here. But what the analysis above tells us is that for deflation to be beneficial in this case, any benefits from the purging must outweigh the costs caused by the problems of deflation identified here.

To put it another way, if the creation of money to counteract a fall in prices causes misallocation and that’s a cost, then there are two costs to consider. The cost of that misallocation must be compared against the cost of deflation. No analysis is complete without accounting for both.

Written By
Robert Thorpe
More from Robert Thorpe
The Irish government may have discovered a fatal flaw in the Eurozone...
Read More