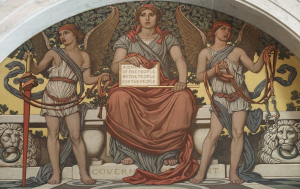 You might remember a couple of months ago that Jim Rickards came up with the intriguing theory that the Federal Reserve in the United States would soon go bankrupt even according to its own rules (such as they are).

Remarkably, within a few weeks of that, the Federal Reserve released bizarre new accounting rules for itself, which involved negative liabilities, which to all intents and purposes made it impossible for them to go bankrupt if they can continue to apply their own ‘change-the-goalposts’ accountancy rules to their own books (rather than using any common-sense accountancy paradigm that the rest of the planet might have used for the past several hundred years).

One therefore suspects that the Federal Reserve watch Mr Rickards’ ongoing statements with a hawk-like eye.

In his latest interview with Eric King, Mr Rickards puts forward another fascinating possibility, that the Federal Reserve will be able to announce ‘truthfully’ on July the 1st this year, that it has ceased its QE2 money printing programme.

However, if you follow the implicit logic in the interview below, you may agree with Mr Rickards that on July the 1st they will still remain able to monetize $750 billion of US government debt each year, for the foreseeable future, on the basis of all of the money printing that they have already rolled off the Bureau of Engraving’s printing press.

In the apocryphal words of a certain Austrian lady in the French pre-revolutionary court of Louis the XVIth, they may indeed be planning to have their cake and eat it.

Obviously, with people like Mr Rickards around they will never be able to get away with it completely, and with the US government engaging in $1.5 trillion of deficit spending each year, ad infinitum — and arguing internally about a relatively paltry $60 billion dollars of ‘painful’ cuts — they may still need to rack up another $750 billion dollars a year from thin air, just to keep this party going a bit longer.  This will be especially likely with a presidential election coming up, in which the Great Pharaoh King Obama will come off the golf course and read us all some more folksy speeches off his teleprompter, to make us realise that one day real soon he will finally deliver the change ‘that you can believe in’.

No doubt, he will win again, this time against Mitt Romney, unless something unbelievably improbable happens with Dr Ron Paul.  (Well, I’ll keep with the dream until it becomes impossible to do so.)

However, what I like is the idea that the men and women at the Federal Reserve who gave us ‘negative liabilities’ — plus all of their satellite central banks around the world — still think they’re going to get away with all of these terminological inexactitudes and Byzantine subterfuges, and that they genuinely think the rest of us will still be fooled by their playground machinations, which involve the popular strategy of continually telling porky-pies to the teacher about what happened to the homework.

One day, the Great Big Dog in the sky that eats all such homework will regurgitate these endless excuses and reveal them for what they are; a forty-year blizzard of counterfeited lies. No doubt these same central bankers are already working out ways of how to blame the Libyan crisis and the Japanese crisis for everything that is about to go so very badly wrong with their Keynesian schemes, especially concerning the dollar, over the next few years.

But it will fail to wash, I’m afraid. Especially while splendid men like Mr Rickards are on their case:

You do, of course, have to wonder at the mentality of these people in the central banks, who are supposed to be the best and the brightest of us.  As Hayek would have said, no man or group of men, no matter how intelligent, can match the entire market of all interacting humans; but when will they get the message? And why, for such ‘intelligent’ people, do they appear so stupid?

When are these Über Supermen finally going to realise that money printing fails to solve anything, but only makes things worse for everyone outside the feeding trough of government, and even eventually fails for them too, when nobody will take their paper scrip any more or obey their costumed regulation enforcers? Or, in the words of Richard Bandler:

“If what you are doing is not working, stop and try something else.”

You never know, one day they may even phone Professor Philipp Bagus and ask his opinion about 100% reserve commodity money, and how this could instantly remove all negative externalities and negative liabilities from their Gordian Knot money printing scam, plus get us back to an honest system of enforceable property rights and monetary freedom unencumbered with all the usual government ineptitude, from the same kind of people that built so many nuclear power stations on one of the world’s most active earthquake and Tsunami-causing fault lines.

We can but hope.

Written By
Andy Duncan
More from Andy Duncan
A few weeks ago, eagle-eyed readers of the Cobden Centre will have...
Read More