Consider this diagram showing the billions of euros that each of 8 EU countries owes the other. 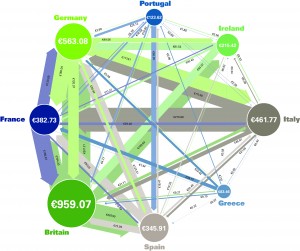 Whilst the numbers are far from perfect, they give a clear understanding of the extent to which EU debt obligations are interlinked. But why try to raise money to pay someone off if they owe you even more? Why not cross cancel the debts and be left with the difference?

To see how this might work I recently ran a classroom simulation where students did precisely that. After three trading rounds they had managed to generate the following results:

The final picture demonstrates the scope for cross cancellation. It is hard to see how such a policy would be possible, let alone desirable, but as a pedagogical exercise I think it is worth consideration. For those interested in more details I have set up a website: http://www.eudebtwriteoff.com. You can also download the full report: The Great EU Debt Write Off (.pdf)

18 replies on “How much EU debt can be written off through cross cancellation?”