“I’m mortified to have to pay 50%!” So said the phenomenally successful singer Adele in an interview with Q magazine. And why shouldn’t she be? Isn’t it unfair that a person can perform labour for which they get less of the reward than someone else who didn’t perform it? The right to work as you wish and dispose of the fruits of your labour as you wish are essential rights that differentiate free men and women from slaves. Agreeing with Adele seems a moral slam dunk.

Not if you write for or read the Guardian. They took Adele to task for criticising government spending on transport and schools elsewhere in her interview, remarks which are easily dealt with. But their rebuttal of Adele’s complaint about the 50% tax rate was bizarre; the Guardian simply said “The Beatles had to pay 95%”

This is true historically but the obvious response would be ‘So what?’ It’s worth remembering that the period when these penally high tax rates were in place wasn’t exactly a golden one for British economic policy making with the ‘stop – go’ spasms and sterling crises of the 1960’s giving way to the rampant inflation and economic mayhem of the 1970’s. High taxes are no better an idea now than they were then.

The reason high taxes were and remain the wrong policy prescription is a very obvious one; the more you tax something the less of that something there is. That is why governments pile taxes on cigarettes and alcohol, (they claim) they want there to be less smoking and drinking.

The problem the left had when it imposed high taxes before, and has now that it would do so again, is that while it accepts that this obvious and empirically proven proposition applies to fags or booze, it refuses to see it in action anywhere else. It was this economic blind spot which led Labour to campaign at the last election for a tax on jobs under the strange notion that it would not lead to fewer jobs being created.

Fundamentally, this problem stems from the left’s assumption that everyone is (or ought to be) just like them.  Because they are happy to be servants of the state, seeing it as some benign Rousseauian manifestation of the General Will, they are happy to hand large chunks of their pay packets over to it.

The rest of us, however, are slightly more sceptical of the obviously crazy notion that every single copper coin of government spending is virtuous of itself. Thus, when taxes on our earnings go up, instead of redoubling our efforts and congratulating ourselves for supplying yet more income for the state we tend to be a bit annoyed and wonder what the point of putting any extra effort in is when more than half of the reward for that extra effort will be taken from you. Your effort slackens. You reduce your labour or you go and do it somewhere else. With less labour going on, the state’s income from taxes on labour falls. We saw all this back in the high tax Keynesian heyday of the 1970’s and look where it got us. Taxes went up and The Rolling Stones rolled off to the south of France with their millions and watched on TV as Denis Healey went to the IMF in 1976 to ask for a loan to pay the government’s bills. 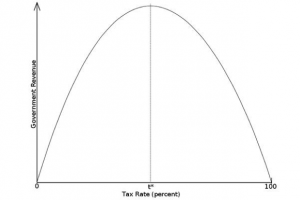 This was, and remains, a direct challenge to the left wing notion that because all public spending is good there is no disincentive effect from higher taxes; that despite receiving less and less of the reward for their labour, people will continue to provide the same amount of taxable labour regardless. To a left winger there would be no Laffer Curve, simply a diagonal line sloping upwards from bottom left at a 45 degree angle.

There is a Laffer Curve shaped mountain of empirical evidence to support this basic contention. Yet the statists’ opposition to this economic truism has often been simply hysterical, even from noted economists. This is because they understand the implications of the Laffer Curve. It sets a cap of t*, whatever the precise numeric value may be, beyond which the state’s share of the economy cannot advance. At some point taxes will rise so high that they will start to decrease revenue, the limits of statism are reached. That is why people like Adele, Philip Green or, indeed, anyone who questions even taxes of over 50% is considered not just wrong but evil. Adele can take comfort that she has morality and economic fact on her side as well as talent.

Written By
John Phelan
More from John Phelan
Paul Krugman’s arguments do not fare well against evidence in a new...
Read More