After rising to 3.33% in March, the differential between the 10-year US Treasury Note and the federal funds rate eased to 3.07% at the end of June. Historically a narrowing in the differential, also called the ‘yield curve’, has occurred many months before the onset of a recession. 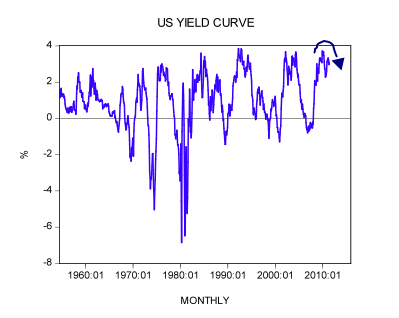 According to the practitioners of ET, an economic slump is associated with falling interest rates. Consequently, whenever investors expect an economic slowdown or a recession they shift their money from short-term securities towards long-term bonds. This shift raises short-term rates and lowers long-term rates, i.e. “narrowing in the spread” or the “inversion in the yield curve” emerges.

Another theory called the Liquidity Preference Theory (LPT) seems to have better reasoning for the upward sloping yield curve. According to the LPT, people demand a liquidity premium for longer maturities over the short-term maturities on account of a risk factor. The problem with the LPT, however, lies in its inability to explain inverted yield curves, i.e. when short-term interest rates are higher than the long term rates.

(Now, in a free unhampered market economy, the tendency towards the uniformity of rates will only take place on a risk-adjusted basis. Consequently, the yield curve that includes the risk factor is likely to have a gentle positive slope. It is, however, difficult to envisage a downward sloping curve in a free unhampered market economy – since this would imply that investors are assigning a higher risk to short-term maturities than long-term maturities, which doesn’t make sense).

Even if one were to accept the rationale of ET for the changes in the shape of the yield curve, these changes are likely to be of very short duration on account of arbitrage. Yet historically either an upward sloping or a downward sloping yield curve held for quite a prolong period of time (see the chart above). What, then, is the primary mechanism that causes the curve to slope so consistently? The culprit is the central bank’s tampering with financial markets via monetary policy. 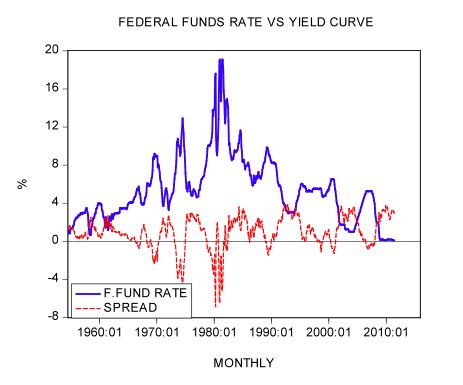 For instance, the artificial lowering of short-term interest rates, which is reinforced by the increase in the monetary pumping of the Fed gives rise to an upward sloping yield curve. This upwardly sloping curve (in excess of the slope that allows for the risk factor) cannot be sustained since it sets in motion forces that are working towards the flattening of the curve.

To sustain the positive sloping curve the Fed must persist with its easy stance. (Should the central bank cease with its monetary pumping the shape of the yield curve will tend to flatten).

Whenever the Fed reverses its stance by slowing its monetary pumping and in the process raises short-term interest rates various activities that emerged on the back of the previous loose stance are now coming under pressure – this sets in motion an economic bust.

A tighter stance manifests itself through a flattening or an inversion of the yield curve. In order to sustain the narrowing in the yield spread the central bank must maintain its tighter stance.

Should the Fed abandon the tighter stance, the tendency for an equalisation of rates will arrest the inversion of the yield curve.

Whenever the Fed reverses its monetary stance, which manifests itself through the change in the shape of the yield curve, the effect of this change in the stance doesn’t assert itself immediately on the entire economy.

The effect of a change in monetary policy shifts gradually from one market to another market. It is this that prompts the change in the shape of the yield curve to be seen as a leading indicator of economic activity.

For instance, when during an economic expansion the Fed raises the fed funds rate target, which causes the narrowing in the yield spread, the initial effect is minimal for economic activity is still dominated by the previous easy monetary stance.

It is only later on once the tighter stance begins to dominate the scene that economic activity begins to weaken.

Likewise, when during a recession the central bank lowers the short-term interest rate this steepens the yield curve. However, the effect of this loosening, which is manifested by a steepening in the yield curve only asserts itself after a time lag.

Observe that according to the popular framework of thinking it is not the central bank that alters the shape of the yield curve but people’s expectations.

Consequently, according to this way of thinking via a close scrutiny of the shape of the yield curve, one can establish people’s psychological dispositions and thus the future course of the economy.

To the extent that investors form expectations regarding the future course of monetary policy, this only tends to reinforce the shape of the yield curve as set by the central bank.

Thus in the late stages of an economic expansion investors begin to anticipate a tighter monetary stance and this tends to reinforce the upward slope of the yield curve. Investors begin shifting their money away from long term- securities towards short-term securities. This lifts long-term rates and lowers short-term rates.

During an economic slump investors begin anticipating a further easier monetary stance and the downward slope of the yield curve is reinforced. Investors shift their money towards long term securities away from short-term securities.

Hence the reason for the predictive powers of the yield curve is not on account of expectations but rather on account of the monetary policy of the Fed.

Things, however, need not always work this way. For instance, if the pool of real savings is declining, the pumping by the Fed may not lift economic activity.

On the contrary, such pumping will deplete the pool further and make things much worse.

For instance, in such a set-up an upward sloping yield curve will not send a correct signal regarding the future course of economic activity.

We can thus conclude that as long as the pool of real savings is expanding the yield curve will appear to be a useful forecasting device.

Once, however, the pool of real savings becomes stagnant or declining the illusion that the central bank can navigate the economy is shattered.

Hence, commonly accepted signals that emanate from monetary policy are likely to be of a confusing nature as far as the future course of the economy is concerned.

In such a scenario relying on monetary indicators such as the yield curve could lead to a misleading analysis.

Are democracy and sound money incompatible?  Many people think they are but Douglas Carswell, MP for Clacton, begs to differ.  Indeed, he has begged…