I came across this excellent report by Boone and Johnson from the Peterson Institute for International Economics on the mechanics of how the Eurozone sovereign debt crisis built up (hat-tip James Aitken of Aitken Advisors).

The report helpfully runs through the various policy options that the Eurozone leaders have, and runs through the likely consequences of default – interesting reading given the growing probability of some portion of this option being taken with respect to Greece at least.  The writer at least believes that default and ‘an end to the moral hazard regime’ has now become the most likely option.

Cobden centre readers will enjoy the description of how it was the ECB’s repurchase operations that entrenched moral hazard throughout the Eurozone through the treatment of all sovereign paper as collateral from banks equally regardless of its creditworthiness.

There is also an up-to-date summary of the current net claims of all countries against each other, all guaranteed and monitored through the ECB, imbalances that are still building.  Germany as of July was the largest creditor to the scheme at over Eur335bn.  In gamblers’ parlance Germany’s decision over whether to throw good money after bad will determine the route the crisis will take next. 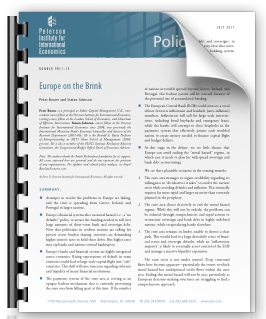 Written By
Tim Lucas
More from Tim Lucas
I was asked recently why it is that market forces do not...
Read More

9 replies on “Europe on the brink”