The pathetic state of the global financial system was again on display this week. Stocks around the world go up when a major central bank pumps money into the financial system. They go down when the flow of money slows and when the intoxicating influence of the latest money injection wears off. Can anybody really take this seriously?

On Tuesday, the prospect of another gigantic cash infusion from the ECB’s printing press into Europe’s banking sector, which is in large part terminally ill but institutionally protected from dying, was enough to trigger the established Pavlovian reflexes among portfolio managers and traders.

There are, of course those who are still under the illusion that this can go on forever. Or even that what we need is some shock-and-awe Über-money injection that will finally put an end to all that unhelpful worrying about excessive debt levels and overstretched balance sheets. Let’s print ourselves a merry little recovery.

How did Mr. Bernanke, the United States’ money-printer-in-chief put it in 2002? “Under a paper-money system, a determined government can always generate higher spending…” (Italics mine.)

Well, I think governments and central banks will get even more determined in 2012. And it is going to end in a proper disaster.

Lender of all resorts

Last week in one of their articles on the euro-mess, the Wall Street Journal Europe repeated a widely shared myth about the ECB: “With Germany’s backing, the ECB has so far refused to become a lender of last resort, …” This is, of course, nonsense. Even the laziest of 2011 year-end reviews will show that the ECB is precisely that: A committed funder of states and banks. Like all other central banks, the ECB has one overriding objective: to create a constant flow of new fiat money and thus cheap credit to an overstretched banking sector and an out-of-control welfare state that can no longer be funded by the private sector. That is what the ECB’s role is. The ECB is lender of last resort, first resort, and soon every resort.

So why was the springtime attempt at “rate normalization” aborted? Because of deflationary risks? Hardly. Inflation is at 3 percent and thus not only higher than at the start of the year but also above the ECB’s official target.

The reason was simply this: states and banks needed a lender of last resort. The private market had lost confidence in the ability (willingness?) of certain euro-zone governments to ever repay their massive and constantly growing debt load. Certain states were thus cut off from cheap funding. The resulting re-pricing of sovereign bonds hit the banks and made it more challenging for them to finance their excessive balance sheets with money from their usual sources, not least U.S. money market funds.

So, in true lender-of-last resort fashion, the ECB had to conduct a U-turn and put those printing presses into high gear to fund states and banks at more convenient rates. While in a free market, lending rates are the result of the bargaining between lenders and borrowers, in the state-managed fiat money system, politicians and bureaucrats define what constitutes “sustainable” and “appropriate” interest rates for states and banks. The central bank has to deliver.

The ECB has not only helped with lower rates. Its balance sheet has expanded over the year by at least €490 billion, and is thus 24% larger than at the start of the year. This does not even include this week’s cash binge. The ECB is funding ever more European banks and is accepting weaker collateral against its loans. Many of these banks would be bust by now were it not for the constant subsidy of cheap and unlimited ECB credit. If that does not define a lender of last resort, what does?

And as I pointed out recently, the ECB’s self-imposed limit of €20 billion in weekly government bond purchases (an exercise in market manipulation and subsidization of spendthrift governments but shamelessly masked as an operation to allow for smooth transmission of monetary policy) is hardly a severe restriction. It would allow the ECB to expand its balance sheet by another €1 trillion a year. (The ECB is presently keeping its bond purchases well below €20 billion per week.)

It is noteworthy that there still seems to be a widespread belief that all this money-printing will not lead to higher inflation because of the offsetting deflationary forces emanating from private bank deleveraging and fiscal austerity.

This is an argument I came across a lot when I had the chance in recent weeks to present the ideas behind my book to investors and hedge fund managers in London, Edinburgh and Milan. Indeed, even some of the people who share my outlook about the endgame of the fiat money system do believe that we could go through a period of falling prices first, at least for certain financial assets and real estate, before central bankers open the flood-gates completely and implement the type of no holds barred policy I mentioned above. Then, and only then will we see a dramatic rise in inflation expectations, a rise in money velocity and a sharp rise in official inflation readings.

Maybe. But I don’t think so. I consider it more likely that we go straight to higher inflation.

The deleveraging in the banking sector is the equivalent of austerity in the public sector: it is an idea. A promise. The reflationary policy of the central bank is a fact. And that policy actively works against private bank deleveraging and public sector debt reduction.

Consider this: The present credit crisis started in 2007. Yet, none of the major economies registered deflation. All are experiencing inflation, often above target levels and often rising. In the euro-area, over the past twelve months, the official inflation rate increased from 2 percent to 3 percent.

Below is the so-called “true money supply” for the U.S. calculated by the Mises Institute. 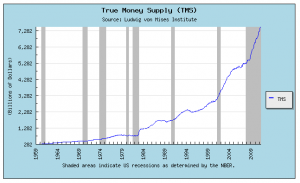 As the Mises-Institute’s Doug French pointed out, total assets held by the six biggest banks in the U.S. increased by 39% over the past 5 years. Maybe this is not surprising given that in our brave new world of limitless fiat money, credit contraction is strictly verboten.

In the UK the official inflation reading is at around 5 percent, but nevertheless in October the Bank of England embarked on another round of “quantitative easing”. It has so far expanded its balance sheet by another £50 billion in not even three months, which constitutes balance sheet growth of about 20 percent.

What we have experienced in the UK in 2011 provides a good forecast in my view for the entire Western world for 2012: rising unemployment, weak or no growth, failure of the government to rein in spending, growing public debt, further expansion of the central bank’s balance sheet, rising inflation.

Death of a safe haven

And what about Switzerland? Here the central bank expanded its balance sheet by 40 percent over just the first three quarters of the year, and almost tripled the monetary base over the same period of time. Most of this even occurred before the 6th of September, the day on which Mr. Hildebrand, the President of the Swiss National Bank, told the world and his fellow Swiss countrymen and women that the whole safe-haven idea was rubbish and that Switzerland was now joining the global fiat money race to the bottom.

Deflation has become the bogeyman of the policy establishment. It must be avoided at all cost! Of course for most of us regular folks deflation would simply mean a tendency toward lower prices. It would mean that the capacity of the capitalist economy to increase the productivity of labour through the accumulation of capital and to thus make things more affordable over time (a true measure of rising general wealth) would accurately be reflected in falling nominal prices. The purchasing power of money would increase over time. This, however, would require a form of hard and apolitical money. Instead we are constantly told that our economy needs never-ending monetary debasement in order to function properly. We are constantly told to fear nothing more than deflation, which can only be averted by a determined government and a determined central bank. And the never-ending supply of new fiat money.

Appropriately, there is no talk of exit strategies any longer.

Given the size of the already accumulated imbalances I think a stop to this madness of fiat money creation would be painful at first but hugely beneficial in the long run. I am the last to say that no risk of a very painful deflationary correction exists. But a correction is now unavoidable in any case, and every other policy option will make the endgame only worse. Even if I am wrong on the near-term outlook on inflation and even if all this money-printing does not lead to higher inflation readings imminently, it will still be a hugely disruptive policy. Money injections obstruct the dissolution of imbalances and invariably add new imbalances to the economy, including new debt and capital misallocations, that will make even more aggressive money printing necessary in the future.

The nationalization of money and credit

Herein lies a fundamental contradiction in our present system: The desire for constant inflation and constant credit expansion requires that the banks be shielded from the effects of their own business errors. Allowing capitalism’s most efficient regulators, profit and loss, to do the regulating, would mean that banks could face the risk of bankruptcy – this is, of course, the ultimate disciplinary force in capitalism. This could then lead to balance sheet correction and thus periods of deflation. Ergo, banks cannot be capitalist enterprises at full risk of bankruptcy as long as constant credit growth and inflation are the overriding policy goals. The constant growth of the banking sector must be guaranteed by the state through the unlimited provision of bank reserves from a lender-of-last resort central bank.

That banks get ever bigger, that they routinely hand out multi-million dollar bonuses, and that they frequently get bailed out, is not a result of the greed of the bankers – a stupid explanation anyway, only satisfactory to the intellectually challenged and perennially envious – but is integral to the fiat money system.

Last week the Federal Reserve and the Bank of England announced plans to tighten the control over the balance sheet management and the risk-taking of private banks. This is just the beginning, believe me. The nationalization of money and credit will intensify in 2012 and beyond. More regulation, more restriction, more control. Not only in defence of the bankrupt banks but also the bankrupt state. We will see curbs on trading, short-selling restrictions and various forms of capital controls.

A system of state fiat money is incompatible with capitalism. As the end of the present fiat money system is fast approaching the political class and the policy bureaucracy will try and defend it with everything at their disposal. For the foreseeable future, capitalism will, sadly, be the loser.

The conclusion from everything we have seen in 2011 is unquestionably that the global monetary system is on thin ice. Whether the house of cards will come tumbling down in 2012 nobody can say. When concerns about the fundability of the state and the soundness of fiat money, fully justified albeit still strangely subdued, finally lead to demands for higher risk premiums, upward pressure on interest rates will build. This will threaten the overextended credit edifice and will probably be countered with more aggressive central bank intervention. That is when it will get really interesting.

We live in dangerous times. Stay safe and enjoy the holidays.

10 replies on “The nightmare after Christmas”