“Don’t fight the Fed – bet on it.”
– Lee Quaintance and Paul Brodsky of QB Asset Management.

In December last year, the poet Alice Oswald withdrew from the TS Eliot poetry prize on the grounds that the prize was being sponsored by an investment company (Aurum, a fund of hedge funds manager). How you feel about this principled stance may depend on whether you are a UK taxpayer. If you are a UK taxpayer, you will probably feel relieved that your tax pounds are no longer being squandered on the Arts Council’s sponsorship of the prize in question – a tiny victory, but a victory nevertheless against the arrogant dissipations of the state. Ms Oswald seems to believe that poetry prizes should be funded with everybody else’s money, rather than by a private patron grown-up enough to be responsible for its discretionary expenditure (private patronage being what you might call ‘traditional’ in the arts). As a graduate in English Language and Literature, this commentator has no animus against poets. But I am not sure we want them in charge of the economy. They are notorious for starving in garrets for a reason.

Ms Oswald’s ‘protest’ is part of a wider intellectual malaise that lazily conflates government spending with the real economy and which conveniently ignores the fact that without a flourishing private sector, there would be no government and certainly no government spending to speak of. It is part of that lazy thinking that inspires journalists to keep speaking of “the government” spending money on this or that, as if “the government” were somehow sitting on an infinitely large pile of ‘government money’ that most of the time it was unreasonably withholding from worthy causes. The reason our economy is knackered is because successive governments have indeed pandered to subjective worthy causes with money that those governments did not possess. Tomorrow and tomorrow and tomorrow, taxpayers will be paying the bill. It is not government money because the government doesn’t have any. It has liabilities only. It is taxpayers’ money.

The coalition’s finest achievement to date has been a triumph of PR – as one might expect, given that PR appears to comprise the only work experience our current Prime Minister has ever had outside politics. A myth has arisen, polished frequently by an ignorant media, that the British government has started to get to grips with the grotesque national debt inherited from the previous Labour administration. But as Prosperity Capital’s chief economist Liam Halligan points out, contrary to the mood music pumped out by the press, government spending is still rising: 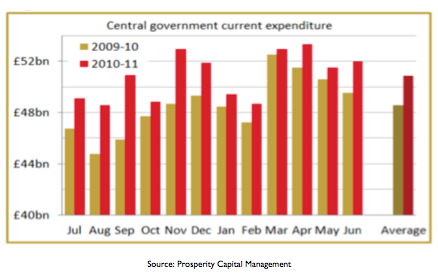 Central government expenditure was actually higher for the fiscal year 2010/11 than it was under the last year of the Labour government. The UK debt figures are worse than conventionally believed because 2011 debt including “interventions” stood at £2,270 billion as at September 2011, or 150% of UK GDP. To which we should add public sector pensions (£1,100bn+), PFI (£400bn+) and sundry other off-balance-sheet obligations of the state. Liam Halligan’s bleak summary is that after five years of supposed austerity, UK government spending will be back to 2005 levels but with twice as much debt. 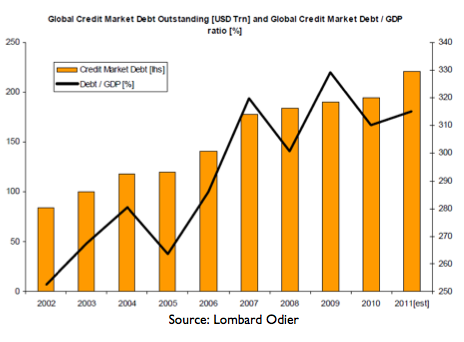 The problem is insuperable. More debt has been created in the past forty years than will ever realistically be paid back. The problem is compounded by the fact that the modern economy operates with debt-based money – all money is lent into being by fractionally reserved banks. So when beleaguered households, for example, start paying down their debts, money dies as the money supply shrinks. (Of course, central banks are doing everything in their power to keep the monetary pumps working overtime, thus ensuring that the purchasing power of money deteriorates steadily over time. Which is why it makes sense for all investors to hold a portion of their assets in the form of the monetary metals, gold and silver, purely for the purpose of protection against ongoing monetary inflation and currency depreciation.) Which leads us to the existential financial problem of our time. The modern, debt-based economy requires constant economic expansion if only to service all that debt. So what happens when the modern economy goes ex-growth and stops expanding ? Iceland already found out. Greece is in the process of discovering. But we will all get a chance to participate in this lesson.

Portfolio manager Doug Noland has written persuasively over recent years of what happens when governments and their financial sector lapdogs lose respect for the “moneyness” of money. Money is powerful and precious. Government bonds, for example, are now neither. Runaway fiscal and monetary stimulus throughout the western economies is in the process of destroying the concept of creditworthiness at the centre of the modern monetary system. Writes Noland,

Most today fail to appreciate the potential catastrophic consequences of a crisis of confidence in “money” – a crisis of confidence in the moneyness of government debt and associated obligations. I sense little appreciation for the momentous role played by “money” as the core foundation of overall global Credit – or for Credit as the fuel for global economic activity. We saw again in 2011 how abruptly things can begin to spiral out of control when the marketplace perceives that policymakers don’t have the situation under control. We’ve witnessed, as well, how quickly aggressive concerted global policy responses can transform de-risking/de-leveraging back to re- risking/re-leveraging. In a span of a few weeks, problematically illiquid markets morphed right back into liquidity abundance and speculative excess.

From a monetary and market perspective, we’ve returned to the precarious stage. Risk embracement and leveraging create market liquidity abundance. Strong markets emboldened the perception that policymakers have everything under control, which stokes even more speculation and stronger risk market inflation. And global risk asset prices – from stocks, to junk bonds to sovereign debt to emerging market debt and equities – enjoy inflated prices based on the view that policymakers can ensure a low-risk macro backdrop. Market players impute moneyness upon trillions of debt instruments of suspect quality – Credit that will be vulnerable in the next bout of risk aversion and attendant de-leveraging.

I just don’t believe policymakers have the situation under control. Sure, they can incite a reversal of short positions and risk hedges. They so far retain the capacity to foment “risk on” and speculative excess. Yet, in reality, this is more destabilizing than it is a source of system stability. The amount of mercurial speculative finance has become so enormous as to be unmanageable. When this massive pool embraces risk things can quickly get out of hand (how about $150 crude?). But when this pool inevitably turns risk averse, illiquidity and market disruption once again become immediate problems. And it all hinges on the perception of the efficacy of policymaking and the moneyness of sovereign debt – and, in the end, the sustainability of the massive issuance of non-productive government Credit. The analysis of Bubbles and Bubble dynamics is integral to a Contemporary Theory of Money and Credit.

And on the 24th of February, Noland wrote:

This afternoon former Bundesbank Vice President and ECB Executive Board member Jürgen Stark warned that public finances in advanced economies were in “dire straits” and that fiscal deficits were “unsustainable.” He was also critical of the ECB bond purchase program, warning that “intervention in the sovereign bond markets postponed adjustment requirements.” I’m with Mr. Stark on this – and I’m with the German economic viewpoint more generally. Indeed, my analytical framework draws heavily from the “Austrian”/German perspective of the overriding importance of stable money and Credit. The Germans well appreciate the danger of monetary inflation, flawed policymaking doctrine, economic maladjustment and Bubbles. And most American economists believe the Germans remain hopelessly fixated on the Weimar hyperinflation experience. I fear our economic community remains hopelessly fixated on flawed economics.

Private investors, we suspect, have little or no conception of the extent to which the state is now the predominant player in the financial markets. Central banks control the money supply and interest rates. Central banking and commercial banking interests have essentially become fused. The ECB’s long-term refinancing operations are banking bailouts by the back door. Central banks are now also the swing players in government bond markets which directly influences the price for corporate credit. Central bank monetary stimulus also directly influences equity market direction and confidence. Fund manager Eric Sprott writes as follows:

There is unfortunately no economic textbook to guide us through these strange times, but common sense suggests we should be extremely wary of the continued maneuvering by central banks. The more central banks print to save the system, the more the system will rely on their printing to stay solvent – and you cannot solve a debt problem with more debt, and you cannot print money without serious repercussions. The central banks are fuelling a growing distrust among the creditor nations that is forcing them to take pre-emptive actions with their currency reserves. Individual investors should take note and follow suit, because it will be a lot easier to enjoy the “Year of the Central Bank” if you own things that can actually benefit from all their printing, as opposed to things that can only be destroyed by it.

Be careful, be very careful about the sort of government debt you hold. (You may well end up being paid in whole – but in such depreciated terms that being “kept whole” will be meaningless in real terms.) In all other respects, our investment choices remain what they have always been: high quality, high yielding defensive equities; uncorrelated systematic trend-following funds; gold, silver, and gold and silver mining companies. There will come a point, and it may admittedly be some time in coming (courtesy of our ever-accommodating friends at the central banks), when a major government bond market (Japan ? Some peripheral market in the euro zone ? Some core market in the euro zone ? The UK ? The US ?) goes bang. You will hear the echo throughout the world. We intend to be a very long way away when that time comes.

Written By
Tim Price
More from Tim Price
“I don’t think there is a problem that this will fix. I...
Read More

One reply on “Fixed”