It seems that every time you turn over a stone on the rocky shore that is the financial condition of the Eurozone you find yet another nasty creature underneath. This time it is to be found across the accounts of the individual national central banks.

The problem has arisen in the cross-border settlement system known as TARGET (an acronym for the Trans-European Automated Real-time Gross settlement Express Transfer System). Money flowing, say, from Greece to Germany is replaced by the Bank of Greece electronically issuing euros, and the inflow into Germany is neutralised by the Bundesbank withdrawing euros from circulation. Both trade imbalances and capital flight are accommodated by these means, and there is no net currency issuance to cover the imbalances. The new currency in Greece would be accounted for by the Bank of Greece showing a liability in its books in favour of the Bundesbank, and the Bundesbank would record an asset in the form of a corresponding loan to the Bank of Greece.

In the past this has not been a problem because the capital flows in the form of commercial bank credit were readily available to fund, for example, purchases of Mercedes buses by a Greek tour operator. However, since the financial crisis capital flows to the peripheral Eurozone members have been disrupted, so that trade imbalances within the Eurozone have not been financed by capital flows. The result is that liabilities have been piling up at the central banks in Germany, the Netherlands, Luxembourg and Finland. The chart below, taken from a recent Bundesbank press release, illustrates the situation. 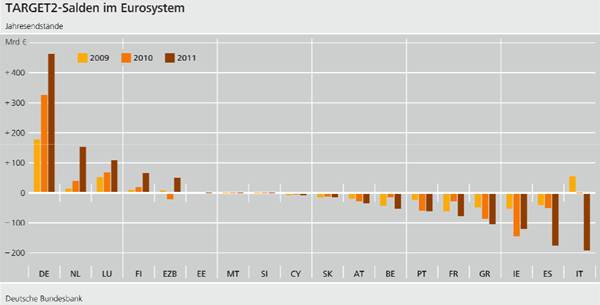 The graph represents the imbalances that have built up over the last three years, with the Bundesbank finding itself on the hook for over €450bn. The deficits in Italy and Spain are the largest, and an earlier chart from five months before shows that capital flight from these two has accelerated alarmingly, particularly for Italy, which only two years ago had a positive balance. While the deficits for the smaller periphery nations look less alarming, as a percentage of GDP they are significant. Worst are Ireland at 75% of GDP, Greece (45%), and Portugal (30%).

These are extra inter-government debts that happen to have accrued at the central bank level, and so far have been missed in all estimates of debt-to-GDP ratios. Since the year-end, over the last three months these imbalances must have deteriorated further, with the possible exception of Ireland, whose position appears to be stabilising.

The build-up of imbalances through TARGET has prevented the immediate financial collapses of Greece et al from capital flight. None of this would have come to light if it hadn’t been for some detailed research by Messrs Sinn and Wollmwershaeuser of the Ifo Institute in Munich. Their investigations prompted a press release from the Bundesbank president dated March 15 that states there is no risk because “the idea that monetary union may fall apart is quite absurd”.

Others, including the citizens of Germany, the Netherlands, Luxembourg and Finland might think the idea of the Bundesbank ever getting repaid to be even more absurd.

2 replies on “TARGETing problems in eurozone”