“The best way to build shareholder value is to build a great company, with exemplary products and services, excellent systems, quality accounting and reporting, effective controls and outstanding people.”

Imagine you are one of two people playing ‘Monopoly’. While you follow the rules religiously, the other player – who also happens to be the banker – does not. He routinely appropriates properties. If he doesn’t like the score on the dice, he simply changes them. He continually takes as much money from the bank as he likes. Whenever the rules don’t suit, he arbitrarily alters them in his favour. And he hates to lose. Rather than concede defeat, he is perfectly willing to set fire to the board. Imagine no longer. This is the state of the financial markets. You are playing against the world’s central banks.

James Grant uses a similar metaphor: the modern investor is like the protagonist in ‘The Truman Show’, unaware until the final reel that everything about his world is artificial – he is living in a TV programme. “By changing interest rates,” observes Grant, “central banks change the perception of every asset class – so what seems cheap may not be cheap.”

For some time now, the Financial Times has been running articles (under the inauspicious label of ‘Collateral Damage’) discussing the merits or demerits of central banking. With so far one exception, that of Congressman Ron Paul, every contributor has sought to defend the status quo. This may be all we have a right to expect from the newspaper in question. As Paul writes, while socialism and centralised economic planning have largely been rejected by free-market economists, the myth persists that central banks are a necessary component of market economies. This investor has grown tired of debating with people who are neither willing nor able to maintain an open mind, but here is the short-hand version: the Austrians are right, and the Keynesians are wrong. We cite one headline to emphasise the broader point (that money, and much more besides, is too important to be left to government), from Friday’s Financial Times:

They are two radically different activities.. Anyone who toils in the markets professionally or manages money for other people does not get to enjoy such a lavish, self-indulgent luxury. Their job is not to opine on such matters, but rather, to manage cash in the environment that is – the world that exists presently, and is likely to exist in the near future. It is not their role to manage money based on the way things ought to be – rather than the way things are.

With all due respect to Mr. Ritholtz, not all of us who toil in the markets professionally can sit idly by while the game is being fixed. Simply withdrawing into a shell of professional non-accountability for malign policy is a response that some of us find morally objectionable. It is too close to saying “I’m All Right, Jack!” – a phrase that Urban Dictionary describes as “Narrow focus, narrow-gauge pseudo-Darwinian selfishness glorified as a sensible philosophy of society and life”.

So yes, while our primary responsibility is the fiduciary and prudential management of our clients’ assets, that task is not at all incompatible with a broader discussion of the deeply manipulated financial environment in which we are obligated to conduct that activity. It is not enough to say that we wish things were different. We state with conviction: things should be different. We don’t merely question why self-appointed bureaucrats are permitted to control the rate of monetary interest. We state categorically: the system must be changed. And if such calls don’t come from within the financial establishment, where else will they come from? Ironically, the loudest call to date has come from a member of the medical profession. But then, many of the reader responses to Ron Paul’s op-ed in the FT, “Our central bankers are intellectually bankrupt”, are masterpieces of irony. Note, for example, the ‘thoughts’ of ‘tasdk’ who makes the facile observation:

The problem with blindly accepting Dr Paul’s diagnosis is that he lacks the necessary qualifications to make a diagnosis. Would you trust a medical diagnosis made by Ben Bernanke, Mario Draghi or Mervyn King?

No, ‘tasdk’, I wouldn’t. But to answer your (fatuous) point, I wouldn’t trust an economic diagnosis from any of those individuals either? Why do you?

Getting rid of central banks – over time, let us be realistic – would have at least two benign effects. In the first instance, it would require commercial or investment banks that lose the plot spectacularly to fail properly, as opposed to feeding off the blood of taxpayers indefinitely. Lest anyone regard the $2 billion loss recorded by JP Morgan’s chief investment office as comparatively trivial, it should perhaps be seen in the context of the same bank’s overall derivatives exposure, which is shown graphically below. JP Morgan’s total derivatives exposure stands at $70.1 trillion, or roughly the same size as the entire world economy. Each of the $1 trillion towers in the image below is double-stacked to a height of 930 feet. 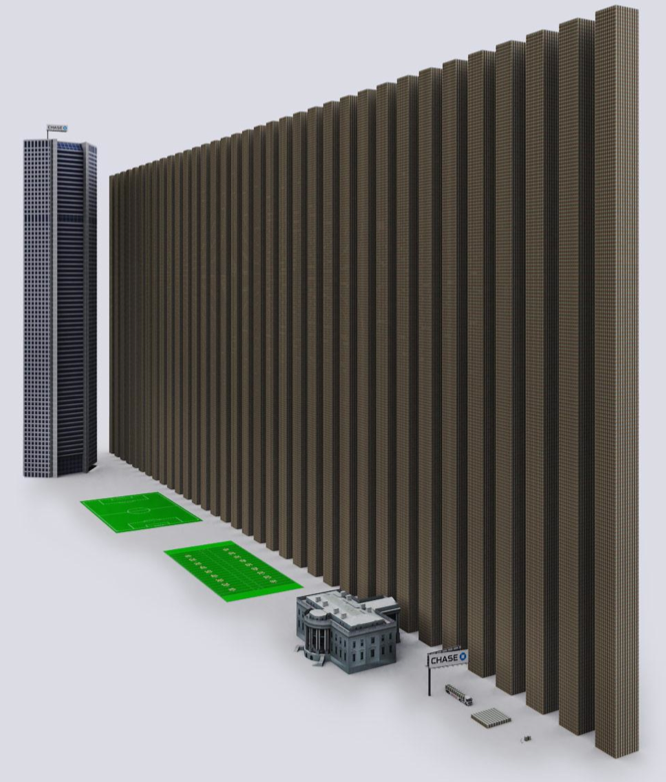 In the second instance, it would require governments to learn to balance their books. A third outcome would be that asset prices reverted to being determined by the market, and not by unelected economists serving the interests of bankers and politicians. But in the meantime, as Barry Ritholtz makes clear, we have to do our best in the situation we’re already in.

Speaking of which, the consistently excellent Gillian Tett, writing for the FT (“Repression on bonds heralds masochism”) reports that last year, US pension funds for the very first time put more of their assets (41%) into bonds as opposed to equities. With Treasury yields as low as they are, this is unlikely to end well. The chart below shows the impact on Gilt investors of the stagflation suffered in the UK during the 1970s. Investors who bought conventional Gilts in 1973 had to wait for 12 years to earn a positive real return on their investment. Do US pension funds know the risks they’re running ? 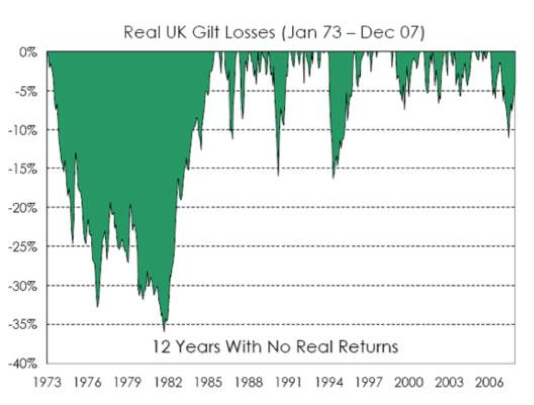 Now THAT is financial repression. Thank heavens the central banks are in charge – nothing could possibly go wrong on their watch.

Written By
Tim Price
More from Tim Price
“No government has ever commanded the resources at the disposal of our...
Read More