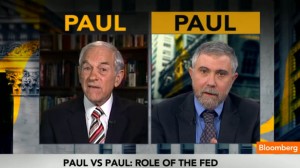 Paul Krugman is the high priest of Keynesianism and modern interventionism, of economic improvement through inflation and budget deficits. As such he is bête noir among us libertarians and Austrian School economists. What makes him so annoying is his unquestioning, reflexive and almost childlike enthusiasm for state intervention, even in the face of its obvious failure, and his apparent unwillingness to probe any deeper into the real causes of our present economic problems or to show any willingness to investigate the effectiveness or ineffectiveness of his particular medicine. His Keynesian convictions are presented as articles of faith that no intelligent person can seriously question. A Krugmanesque argument is always built on a number of assumptions that are beyond doubt:

1)   Recessions, depressions and crises are the result of the unhampered market. We actually do not have to investigate if markets were really free when recessions occurred or what really were the specific causes of whatever threw the economy off track. When there is a recession, depression or crisis, there must have been too much of an uncontrolled market.

2)   The Great Depression was caused by uncontrolled markets.

3)   Recessions, depressions and crises are practically the result of one problem: a lack of aggregate demand. People, for whatever reason (and who cares about the reason; let’s not get hung up on those details) don’t spend enough. If everybody were to spend more, people would sell more. Problem solved. It is the role of government to get people spending again. This is done by printing money and causing inflation so that people spend the money rather than save it. Or by the government running up deficits and spending it on behalf of the stupid savers.

5)   This explains ALL economic problems.

6)   If there are recessions, depressions and crises, they can all be solved by printing money and by deficit spending.

8)   If after another round of money printing and deficit spending we still have a recession, then….well, do you not get it? We obviously have NOT PRINTED ENOUGH MONEY and we are NOT ACCUMULATING ENOUGH DEBT! And, by the way, remember 7) above.

Krugman is practising Keynesianism as a religion. The 8 commandments above are not to be questioned. Whoever questions them is not worthy of debate. Consequently, Krugman has turned down requests to debate people like Peter Schiff or Bob Murphy. Interestingly, he agreed to debate Ron Paul on TV. The link is here.

I have to say that Ron Paul did not do as well as I had hoped he would. He did not sufficiently attack Krugman in my view, for the failure and ultimately disastrous consequences of his policy prescriptions. Krugman is the one who should be made to explain his policy recommendations and who has to answer the criticism that policies like the ones he is recommending got us into this mess in the first place and that his policy ideas have been implemented for years to no effect, at least no positive effect. Yet, Krugman succeeded in putting Paul on the defensive, something in which he was greatly helped by the following: while Krugman may be the most outstanding, unashamed and fundamentalist of the celebrity Keynesians, the attitudes of the general public, the other journalists and thus most of the TV viewers are predominantly shaped by Keynesianism as well, and this means that Krugman, more than Paul or any ‘Austrian’ debater, can rely on some sense of intellectual sympathy. Maybe the viewers don’t quite share the unquestioning dedication to the Faith, that Krugman epitomizes. Maybe they feel queasy about printing trillions of paper dollars and running trillion-dollar deficits. Of course, a true believer like Krugman will never allow himself such feelings. But in general, the public, too, believes that the free market (and greedy bankers) caused the financial crisis; that we need low interest rates and other government measures to stimulate the economy; and that inflation is really not our main concern. Krugman, I think, cleverly used these attitudes to present himself as the safe and rational choice, and Paul as the weirdo who wants to pour out the state-policy baby with the crisis bath water.

Ron Paul started strongly by pointing out that Krugman’s policy is based on the idea that a bureaucratic elite can set interest rates and decide how much money should be created, and that this involves an arrogant and dangerous pretence of knowledge. Very good point.

Immediately, the apostle Krugman raised his head. “You cannot get the state out of money.” “The Fed has to set interest rates.” “You cannot go back 150 years.”

I think this is where Ron Paul should have dug in and put Krugman on the defensive:

“Dr. Krugman just said ‘history told us’. That is nonsense. History doesn’t tell us anything. You need theory to interpret history, and your theory is wrong. You assign blame for the depression according to your Keynesian theory. If that theory is wrong – and I think it is completely wrong – your interpretation of history is hopelessly wrong.

“Dr. Krugman, we no longer live in the 1930s. Why is it that you are harking back to those days? Are we still solving the Great Depression?

“Fact is that the monetary and economic institutions of America were shaped by people with your beliefs, Dr. Krugman. We have your system today. We have conducted and are conducting your policies. And, Dr. Krugman, do you really want to tell the American public that these policies and these institutions, such as the Fed, are working?

“We have no gold standard. Since 1971, the Fed is entirely free to print as much money as it likes. That is your system, isn’t it? That is what you recommend. You say the Fed needs to keep interest rates low and print money to stimulate growth. That is what the Fed did in 1998 after LTCM and the Russia default, just as you recommended. That is what the Fed did again after the NASDAQ bubble burst and after 9/11 – surely, that was not an Austrian policy but a Keynesian one. It was straight out of your rule book, Dr. Krugman.  You say the uninhibited market is to blame for the financial crisis. I say your policy is to blame. The mortgage bubble was blown by the ‘stimulus’ policy of the Fed – low interest rates and plenty of new bank reserves – between 2001 and 2005. That was your recommendation, right? And those of your Keynesian buddies, such as Paul McCulley at Pimco.

“Since 2007, the Fed has been conducting your policy. So has the US government. You demanded monetary stimulus and you got it. The Fed created $2 trillion dollars out of thin air. Interest rates have been zero for years. The US government is conducting stimulus policy to the tune of $1 trillion plus, every year. Are you telling me these are not Keynesian policies? What is it, Austrian policy?!

“What you are recommending has in fact been the guiding principle of global economic policy for years.  What you are recommending is a systematic distortion of the marketplace. It is persistent price distortion. That is why we had an unsustainable housing boom. That is why we had a mortgage boom. That is why we had a financial industry boom. And whenever these artificial booms – that you create with your policy – falter, the American public has to pay the price. And what do you suggest then? More of the same. More cheap credit. More government debt. In the hope that you can generate another artificial boom for which a later generation will again have to pay the price.

“Dr. Krugman, you just answered the question of this journalist about how much more debt we should accumulate, by saying maybe another 30 percent but that nobody can say for sure. I agree that nobody can say how much debt the system can still take. But tell us, why do you think that the next 30 percent of state debt will magically stimulate the economy and that these 30 percent will thus achieve what the previous 30 percent obviously failed to do.

“Dr. Krugman, you have me worried here.  And I think our viewers, too. The only response you have to the abject failure of your policies is that we should do more of them. Whatever Keynesian stimulus is being implemented and whatever money the Fed prints, all you ever say is that it is not enough. We need more. Has it ever occurred to you that maybe the problem is the policy itself? Maybe your medicine is making things worse and not better.

“And something else worries me, Dr. Krugman. When do we ever stop printing money and borrowing? I think that you are stuck in a failed paradigm, a failed economic theory and a failed policy program. This has happened to scientists and politicians before. You cannot admit that failure. When you are confronted with the failure of modern central banking, of Keynesian stimulus and of moderate inflationism, your only answer is that nothing is wrong with any of it, it is just not implemented forcefully enough. Dr. Krugman, you remind me of a doctor who misdiagnosed the disease and prescribed the wrong medicine and who is now unwilling to look at the situation objectively. All you want to do is increase the dosage.

“If the viewers really want to understand what is going on, they should not buy Krugman’s new book but go to the website of the Mises Institute and look for some excellent Austrian School literature, in particular anything written by Ludwig von Mises himself. But if you don’t have time to do this, maybe you should start by reading Paper Money Collapse.”

Well, I guess this is how it could have unfolded.

This article was previously published at Paper Money Collapse.

2 replies on “How to debate Paul Krugman”