In 2007 there appeared the first signs of serious trouble in the US subprime mortgage market. While US Treasury Secretary Paulson assured investors that the problems were ‘contained’, by mid-2008, financial markets were pricing in trouble ahead. Sure enough, by fall 2008, it was clear that not only the US but also much of the global banking system was in need of a general bailout. As concerns mounted, equities and other risky asset prices fell and high-quality government bond prices rose. Investors were seeking safety. Yet a fabled safe-haven asset, gold, was also falling in price. Why?

In 2008, banks were scrambling to raise capital, accumulating so-called ‘Tier1’ assets, primarily highly-rated government bonds. In order to do so, they sold liquid, non-Tier1 assets, including gold, notwithstanding its historical safe-haven status. (However much banks would have liked to have sold illiquid non-Tier1 assets, it was impossible to do so, unless the central bank obliged, as the Fed did with Bear Stearns, AIG and other distressed entities.) 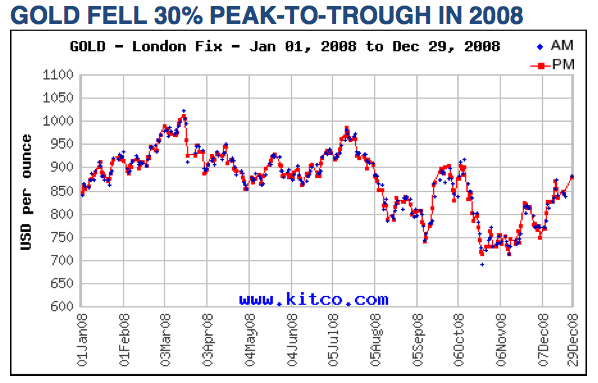 Regulatory capital is just that, regulatory. In 2008, distressed banks had no choice but to maintain adequate Tier1 ratios or risk being shut down or taken over by the regulators. As shown in the previous chart, from a peak of nearly $1,000 reached in March that year, notwithstanding its fundamental safe-haven status, gold plummeted 30%, to nearly $700 by November.

However, once it became clear that policymakers were going to ease capital and mark-to-market requirements for banks and, in certain cases, explicitly guarantee their liabilities, the forced selling of gold and other liquid non-Tier1 assets came to an abrupt halt. The gold price rose to over $850 by year end. However, because risk aversion remained high, due to concerns about the broader economic fallout of what had occurred in the financial system, there was no general recovery in the equity markets until the following spring. 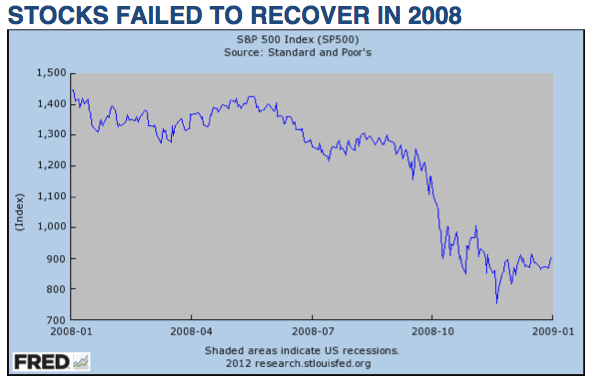 Viewed in this way, the gold price can be understood as a deflation or reflation ‘canary’, appearing to buck the trend from time to time but, in fact, giving critical prior warning of deflationary trouble on the one hand or reflationary relief on the other. Gold is unique in this important sense: It is arguably the only non-Tier1 asset to be universally regarded by investors the world over as a safe-haven asset. As such, it is a more reliable indicator of financial system distress or relief than government bond markets, in particular when central banks are actively manipulating the latter via QE, ‘Twist’, etc.

Recent gold price action vis-a-vis Tier1 assets is thus not only a clear indication of rising banking system distress, it is also an opportunity for those who believe that policymakers stand ready to provide some reflationary, palliative medicine to the financial system in the event that things continue to deteriorate. Although reflationary policies are highly likely to put a floor under equities and other risky assets, the primary, first beneficiary should be the safe-haven of gold, artificially depressed as it now is by being excluded from the Tier1 regulatory basket.

THE ‘UNWITTING’ MOVE BACK TO GOLD

A recent study by Fitch ratings calculated that banks need to raise $566bn of Tier1 capital, a 23% increase. That implies much potential selling of liquid, non-Tier1 assets. At first glance, this would appear to be negative for gold. But in fact it is not that simple.

As it happens, given that so many banks are desperate to raise their capital ratios, there is in fact a discussion underway regarding whether or not gold should, in fact, be designated as Tier1 capital. In a recent article in the Financial Times, it was reported that, “The Basel Committee for Bank Supervision, the maker of global capital requirements is studying making gold a bank capital Tier 1 asset.”

This is a hugely under-appreciated development. For if it happens, it will be an important step toward the re-monetisation of gold. Gold would be able to compete on a level playing field with government bonds. While the playing field could be levelled in this way, there would be a gross mismatch on the pitch. On the one hand, you have unbacked government bonds, issued by overindebted governments, yielding less than zero in inflation-adjusted terms. On the other, you have gold, the historical preserver of purchasing power par excellence. In my opinion, if gold becomes eligible as Tier1 collateral, the price is likely to soar to a new, all-time high.

Now while the gold price might seem elevated in a historical comparison, notwithstanding the recent correction, most prices are. This is what inflation does. It raises prices over time as the base currency depreciates in value. Yes, the stock market may be roughly where it was a decade ago. But this reflects lower valuations, something entirely appropriate for a world awash in unserviceable debt; with profligate, in some cases essentially bankrupt national, state and local governments; complex, inefficient regulatory burdens; challenging demographics; and political instability in some parts of the world. Sorry but this is not the mid-1990s, folks.

As P/E ratios have declined for these compelling, fundamental reasons, equity prices have struggled to rise. Not so the price of gold, for which there is no P/E. Warren Buffet and his sidekick Charlie Munger may disparage this lack of ‘E’, due to gold being an ‘unproductive asset’, but as these guys happen to own a major insurance company, you would think that they would know better. What, exactly, is the P/E of an insurance policy? Doesn’t it have one? No? Well that’s because insurance, by its very nature, is ‘unproductive’. It doesn’t generate an income. (In fact, in normal circumstances, it has a negative carry cost, or ‘premium’.) But importantly, critically, it protects that which does produce an income against extreme or unforeseen negative outcomes.

Now if you’ve got wealth, and you want to protect it from, say, some combination of inflation, deflation, tax and regulatory uncertainty, excessive debt, poor demographics, geopolitical concerns, what have you, well then do you buy into the Facebook IPO? Or do you take out insurance and buy gold instead? After all, with real interest rates negative in developed countries, gold insurance, at present, does not even have a negative carry cost, or ‘premium’! With uncertainty rising and the cost of carry positive in real terms, the fundamental case for accumulating gold is unusually strong at present, quite possibly the strongest it has been since late 2008.

WHERE IS THE FLOOR THIS TIME ROUND?

Based on the 2008 experience, investors who agree that gold remains a safe-haven asset, the current lack of regulatory recognition thereof notwithstanding, and who also belive that policymakers stand ready to step in the rescue the financial system if so required, now is an excellent time to acquire or add to positions in gold. This is not a technical trading or momentum argument. This is a qualitative judgement call on my part, based on my fundamental understanding of what factors drive the price of gold in the medium-term and what I believe is a critical lesson from 2008 specifically.

While I would not rule anything out, given just how arbitrary economic policy-making has become in recent years, I would be surprised were major central banks not to come to the rescue if the euro-area debt crisis escalates further or if another major global crisis emerges in the coming months. By how much might the price of gold fall in the meantime, as the Tier1 scramble continues? Recent and some past price action suggests a floor around $1,500, but it could fall to the $1,200-50 area. Were that to happen, and were other factors to remain essentially unchanged, I would recommend for investors to increase their exposure to gold to the maximum that their portfolio allocation guidelines permit.

Given depressed valuations, investors could also consider increasing their allocation to gold mining shares. That said there are good reasons why gold share P/Es are depressed at present, the subject of a future Amphora Report.

This article was previously published in The Amphora Report, Vol 3, 18 May 2012.

[Editor’s Note: this piece, by Brendan Brown, first appeared at http://mises.org/library/private-equity-boom-easy-money-and-crony-capitalism] Amongst the big winners from the Obama Fed’s Great Monetary Experiment has been the…