In October 2010, I wrote in the Amphora Report titled Guess What’s Coming to Dinner: Inflation! that sharply higher agricultural commodity prices were going to contribute to a rise in consumer prices in the coming months. Sure enough, there was a material rise in the US CPI and that of many other countries in the final months of 2010 and the first half of 2011. Both the 2007-08 and 2010-11 food price spikes and the subsequent rises in the headline rate of US CPI can be seen in the following chart: 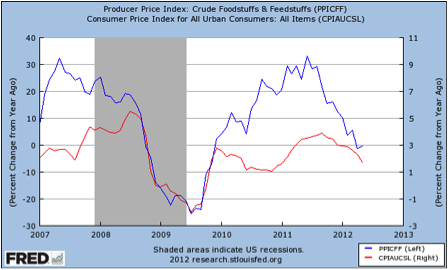 In the chart below, we see how energy price inflation declined as the food price spike began to filter through into higher overall consumer price inflation: 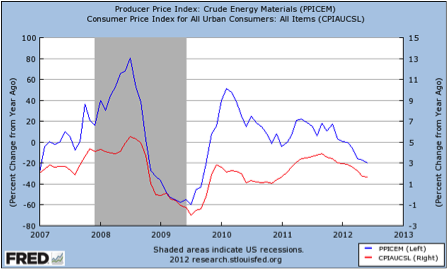 Bringing these observations together and extrapolating into the future, we should be confident that the current food price spike is more than sufficient to contribute to a material rise in headline CPI in the coming months. There are also indirect and hugely underappreciated inflationary effects of higher global food prices. As I also wrote in the Amphora Report mentioned above:

[T]he food price shock in developing economies is going to add fuel to their inflationary fires. Amidst healthy economic growth and low unemployment, workers in these more dynamic economies are already pushing for higher wages, sometimes in the form of disruptive and occasionally even violent strikes. Rising wage demands will, at the margin, result in higher production costs generally. Some portion of these costs are likely to be absorbed into corporate profit margins but, naturally, some will be passed on to consumers in the form of higher prices. Also, keep in mind that these dynamic developing economies are precisely those which export all manner of consumer goods to the developed economies, notably the US.

If recent history is any guide, this analysis implies that the current downtrend in the CPI is unlikely to continue for long. Indeed, the ongoing, obvious fact of positive rates of CPI alongside the persistent deflationary pressures in the global economy provides accumulating evidence that artificially-generated inflation continues to overwhelm the naturally-occuring deflation, the net result being the dreaded ‘stagflation’ that Keynesian economists generally contend cannot happen.

But hold on a minute: Isn’t inflation “always and everywhere a monetary phenomenon”, as Milton Friedman and Henry Hazlitt reminded the economic mainstream in the 1960s? Aren’t we putting the price cart in front of the monetary horse here? Well, yes we are. The key reason why the natural deflation pressure mentioned above fails to result in consumer price deflation is the ongoing creation of money by central banks and the government deficits that they de facto monetise. Looking at the US, it is clear that money growth remains robust and the federal deficit, already huge in a historical comparision, will only increase with the economic slowdown. 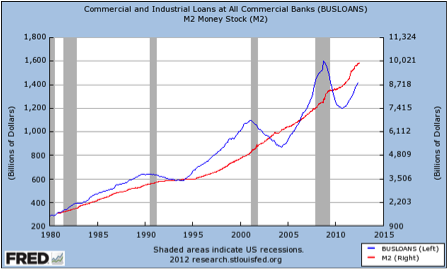 Unfortunately for the Fed and other economic policymakers, by the time you get to the last link in this chain—real GDP growth—the economic effect of the new money/credit has become so diluted that little real growth is achieved in exchange for incurring an exponentially rising debt burden.

A look at the failure of ‘austerity’ to reduce deficits in the euro-area provides an apposite example. While on paper tax increases can reduce deficits, in practice, when economies are already overindebted and the general regulatory burden is large, tax increases tend not to make much difference. Indeed, they can make the fiscal situation worse. Those contemplating the US ‘fiscal cliff’ should take note.

WELCOME TO THE DEBT TRAP

The US is in a debt trap, plain and simple. [2] Yet policymakers refuse to talk about it because to admit that it is a debt trap is to admit policy failure. After all, it is rather difficult to blame a government debt trap on ‘free-markets’. (Not that free markets had much to do with the world’s most regulated industry—finance and banking—blowing itself up in 2008. No, such colossal blowups require vast amounts of government intervention.)

That said, the US is not in the same debt trap as much of the euro-area because its debts can be systematically devalued through monetisation by the national central bank. In the euro-area, this requires some degree of consensus, and the interests of all members are not congruent. Hence the constant back-and-forth between those who want to be bailed out of their debt traps, and those who are being called upon to do the bailing.

The US has no such monetary straightjacket, or any fiscal straightjacket for that matter. President v Congress, Republicans v Democrats, left v right: If there is anything the post-WWII history of US monetary and fiscal policy should teach us, it should be that when it comes to growing the money supply and the federal debt, Washington DC is run by a single branch of government, a single party and a single point on the left-right spectrum. And this branch, the party that controls it and its political orientation is not something that changes with elections. It is a national political pathology.

But remember, the US debt is denominated in dollars. The Fed can assume a growing portion of the debt with incremental monetisation (QE3, 4 … X) and, Vóila! the debt can be devalued to whatever level that branch, that party, deems desirable. While this might imply that government salaries are also being devalued along with the debt, no matter, they can just vote themselves more of those periodic salary increases and all will be well in DC and also some rather nice Virginia and Maryland suburbs.

[2] For a more detailed discussion of what constitutes a debt trap and how the US has fallen into one, see Reinhart and Rogoff, This Time is Different. Or, for a more contemporary discussion courtesy of a Paul Krugman v Ron Paul debate, see The Invisible Red Line, Amphora Report vol 3 (May 2012). The link to the latter is here.

This article was previously published in The Amphora Report, Vol 3, 24 July 2012.

Today, we want to say two things about negative interest rates. The first is really simple. Anyone who believes in a theory of interest…