It was one of those early maths lessons that stuck in my head as the teacher tried to impress upon us how the exponential – that factor of 1000 – was not to be sniffed at.  As teenagers, 11 days was in the Easter holidays just passed, 32 years was ancient and 32000 years was not even remotely imaginable.

Yet today in 2012, we seem to have lost any ability to be truly aghast because we hear these big numbers all day long and it becomes so meaningless that it is accepted without question.  Unfortunately this is one of the by-products of constantly rising prices in a world which is being driven by the mad men at the fiat money printing presses.  The chart below shows the Shadow Government Statistics CPI, ie the non-manipulated one.

Like most people, I have been reading the news regarding the shambolic failure of security company G4S to supply anywhere close to the promised 10,000 security personnel for the London Olympics.  It has been so extensively reported on, including a grilling by MPs at a Parliamentary Select Committee hearing, that you would have thought there would have been no stone unturned.  While I rarely expect any MP to ask a really relevant question, as Bob Diamond’s testimony to the Treasury Select Committee clearly demonstrated to us, I would have expected someone, somewhere to say to G4S CEO Nick Buckles, “How the hell did the contract get signed for £284 million?”.  But no, a bit of discussion about the £57 million management fee and what possible penalty clauses existed, but not one dicky bird about £284million.

My father’s lifetime profession was a building estimator.  He was asked how much it would cost to build a railway station, a football stadium, a block of flats etc, and he would come up with his best estimate of price for his company’s services.   If his tender was accepted as the most suitable both in terms of price and quality, his company would be awarded the job.  If not, no job.  All fairly straightforward apart from the very real risk that if the estimated cost was too low for whatever reason, then you lost money, despite all your men working on the project as you fulfilled your contractual obligations.  It was a delicate balance, too high, you don’t get the job; too low, you wish you hadn’t got the job.  I had it drummed into me from a young age: labour plus materials, break each part down, allow for 5% contingencies, and let the management put their profit margin on.  There are no other parts to the equation.

With none of my father’s attention to detail, let us look at what estimate of cost I would come up with to provide 10,000 security personnel for the Olympics. 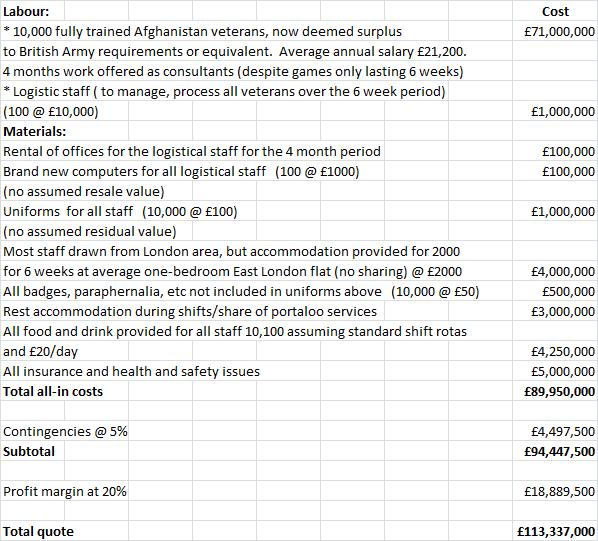 Still a far cry from £284 million.  Even if there are some items missing from the above estimate, I feel that my quote is unlikely to secure the contract as I have gone for high quality and worse case scenarios rather than lean and mean.  Clearly, in order to get my quote lower, I can work my way down the quality curve.  Instead of hiring ex-army trained staff whose knowledge of security in Helmand province is the difference between life and death, we hire A-level students on £8.50 an hour with a full day’s no-fail training under their belts.   Maybe some of the staff could share accommodation and so on.  With profit the only aim and no thought of quality we could probably cut at least 30% off this high quote, if not more.  So if the really high quote for top quality with 20% profit margin is £113 million, and the potential really low quote with dodgy quality is £65million, where did the other £171-219 million go? Welcome to the world of crony capitalism and government contracts my friends.

A builder friend of mine, well versed in local government building contracts, explained to me how the process works in the real world.  The local council puts out to tender for the building work of 100 care home flats for example.  It invites four well known firms in the area to quote.  During days at the horse track and lavish dinners, the local council contact discloses the budget limit for the job.  The heads of the four local firms meet to discuss the job before all putting in their ‘quotes’; the low bid company is already decided.  Once the bid is accepted, the job is sub-contracted to the three other  companies and the profit is split.  There is no Richard Branson here.  This is not competition capitalism, these are price fixing cartels operating crony capitalism.

While I struggle to believe that this is standard operating procedure – call me naïve – what really grates on me is not that the taxpayer is getting ripped off at every juncture, but he is paying top dollar for very low quality – the worse of both worlds.

Don’t be fooled by the big numbers – ask questions.  I mean, does anyone in their right mind think that £9.3 billion for the Olympic budget is within £7 billion of the real number?

PS: We are not alone.  The top 70 of government officials of The People’s Republic of China governed by the Communist Party of China have an alleged average net worth of $1 billion per person.

This article was previously published at Hinde Capital.

One reply on “Hiding behind big numbers”