Recently we have noticed that many more commentators and various important experts have been advocating aggressive monetary pumping by the European Central Bank to fix the economic crisis.  Latest Euro-zone economic data continues to display weakness. The IFO institute German business climate index fell to 103.3 in July from 105.2 in June and 113 in July last year. Manufacturing activity as depicted by the Euro-zone purchasing management index (PMI) fell to 44.1 in July from 45.1 in the month before and 50.4 in July last year. 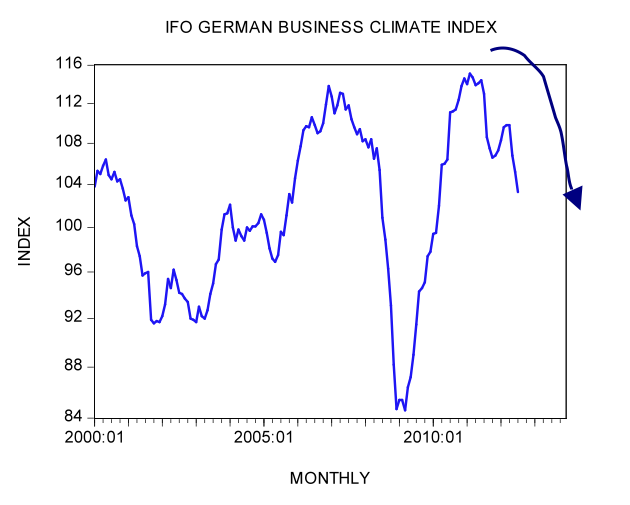 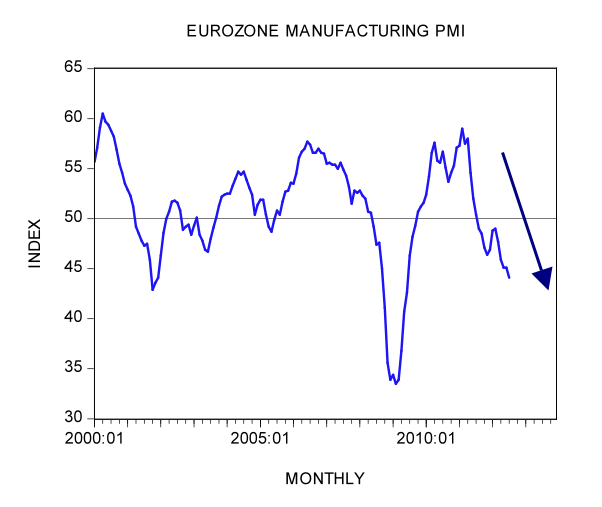 In the July 20, 2012 edition of the International Herald Tribune a columnist Anatole Kaletsky wondered why it is that Britain, Japan and the United States, despite their huge debts and other economic problems, have not succumbed to the financial crises that are threatening national bankruptcy in Greece, Italy and Spain?

According to Kaletsky the ability to print money has allowed the British, Japanese and US governments to run whatever deficits they wanted and to offer their banks unlimited support without suffering the sky-high interest rates that are driving Greece, Italy and Spain toward bankruptcy. Kaletsky then argues that in some circumstances, the financing of deficits by central banks can be extremely dangerous because it can cause rapid inflation. However at present he holds,

The world today is not threatened by inflation and overspending, as it was in the 1970’s and 1980’s. Instead, the danger is generally thought to be deflation caused by inadequate investment, weak consumer spending and falling wages, as in the 1930’s.

A policy of money printing that would rightly have been denounced as counterproductive and irresponsible 40 years ago is now both necessary and prudent.

Kaletsky is of the view that if the ECB were to follow this advice, the euro crisis would soon be resolved. He warns that failing to lift the money printer will sink the Eurozone further.

Mr Kaletsky is in a supposedly good company here, on Wednesday 18 of July 2012 the International Monetary Fund issued a report publicly urging the European Central Bank (ECB) to implement a sizeable program of money printing by buying government bonds in order to fix the economic crisis.

Similarly, a famous Harvard professor of economics, Martin Feldstein, in his article in the Financial Times on 24 July 2012 supports aggressive monetary pumping by the ECB.

The Harvard professor is of the view that strong monetary pumping will lead to a strong depreciation of the Euro versus other currencies, which in turn will boost the Euro-zone’s exports. This in turn will ignite overall economic activity in the Euro area, argues our professor.

The main message from various experts and various influential columnists, as one can see, is that in order to solve the euro crisis the answer is to print money.

Accepting this way of thinking, on Thursday July 26,2012 The European Central Bank (ECB) president Mario Draghi said that ECB policy makers will do whatever is needed to preserve the euro. At the Global Investment Conference in London he said,

Within our mandate the ECB is ready to do whatever it takes to preserve the euro … Believe me, it will be enough.

In short what the ECB president is telling us that he is going to loosen further the ECB’s monetary stance. This means that he could lower the ECB policy rate further – currently at 0.75% – perhaps to zero. The president might consider lifting the pace of money pumping by boosting the ECB balance sheet (buying government bonds of countries such as Italy and Spain). Note that the yearly rate of growth of the ECB balance sheet stood at 57.1% in July versus minus 2.1% in July last year.

The underlying thinking here is that with more money in the hands of individuals, spending on goods and services will go up and this, via the famous Keynesian multiplier, is going to amplify the overall production of goods and services.

Likewise, through the depreciation of the Euro, the increase in the demand for exports will set in motion an overall increase in the production of goods and services in the Euro-zone.

What we have here is the view that demand triggers supply, i.e. the production of goods and services. At present it is held that the demand is somewhat scarce and prevents the emergence of economic prosperity.

In this way of thinking, if individuals are reluctant to increase their demand for goods and services then the government and the central bank must step in to boost demand in order to revive the economy – note that in this way of thinking spending by one individual becomes income for another individual. Hence, the more that is spent, the greater the income becomes.

Why is this way of thinking erroneous?

It is overlooked here that without funding it is not possible to exercise any demand. For instance I have a desire for a luxurious car such as a Mercedes 600 yet my means are sufficient only to secure a bicycle. Obviously, then, it will be difficult for me to secure the Mercedes 600 without the necessary means. Contrary to popular thinking, means are not something that can be printed, they have to be produced.

For instance, if a baker wants to secure apples he has to produce and save enough bread for this. Let us say that to secure 1 kilogram of apples the baker must have at his disposal 8 loaves of bread. (Let us say he has produced 10 loaves, consumed 2 loaves, and saved 8 loaves).

If he wants to secure a car he might need to have 100 loaves of bread for that. If, however, he can only produce 10 loaves then he would have difficulty to purchase the car.

To be able to do so he would need to invest his saved bread in the upgrading of his oven. He would have to pay the oven maker his saved bread. With a better oven he is now in the position to lift the production of bread. This will enable the baker to save more and secure goods that previously he couldn’t afford.

Similarly if the central bank was to print money it cannot boost the production of goods without previous investment in the infrastructure. The printing of money would only boost demand, which is not supported by a previous production of real wealth, i.e. final goods and services.

Likewise, a depreciation of the currency in response to monetary pumping will lead temporarily to a boost in exports by diverting real funding from other activities. However, over time this will make things much worse. (To accommodate the increase in foreign demand one must have the infrastructure for that).

One could of course argue that currently in the Eurozone there are plenty of idle resources, which could be employed. It is overlooked here that the employment of so-called idle resources requires real funding. If the current infrastructure is not capable of generating a sufficient amount of real funding it will be impossible to accommodate an increase in the demand for goods and services. (Note that resources are made idle in the first instance on account of policies that resulted in the misallocation of resources and the depletion of the pool of real funding).

Contrary to popular thinking, printing money cannot replace non-existent real funding. Money is just a medium of exchange; it is not the means of real payment. Individuals are paying for goods with other goods; all that money does here is to facilitate the payment of one good for another good.

So how then can the Euro-zone crisis be solved?

This means that what is required here is to seal off all the channels that undermine the formation of real funding and hence real wealth.

We hold that the key channels that weaken this formation are government outlays and the central bank’s loose monetary policies.

This enlarges the amount of scarce funding in the hands of the private sector. (Note that the focus should be on cutting government outlays and not on cutting the deficit as such). As a result of this more real funding will now be in the hands of wealth generators, which we suggest will get things going in no time.

It must be understood that no central bank or government tampering with markets can make the overall “pie” bigger – all that these policies as a rule generate is a redistribution of a given “pie”. Note that over time these policies lead to a weakening in the formation of real funding and economic impoverishment.

What is required to solve the Euro-zone crisis is to allow as soon as possible wealth generators to get on with the job of wealth creation. For this to occur the government and the central bank must reduce their interference with markets – the sooner this happens, the faster a true sustainable economic recovery will emerge.

4 replies on “Can money pumping solve the European economic crisis?”