Ambrose Evans-Pritchard recently pinned the blame for the financial crisis on “Asia’s `Savings Glut’”. This idea is not new. For readers who may have missed it the first time, we’re republishing this article from September 2009 which argues that monetary policy caused the boom, the bust and the savings glut. 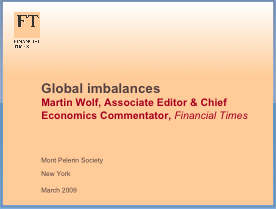 Distinguished commentator and economist Martin Wolf of the FT holds that the savings glut was the source of the excess liquidity that caused the current crisis in which we all find ourselves.

Wolf’s views are expressed crisply in this PowerPoint presentation. In summary, he tells how the Mercantilist approach of the emerging nations after the Asian crisis of the 90s led to a policy of setting exchange rates to encourage exports and limit imports, supported by the stockpiling of foreign currency (a majority in USD) to fund the whole program. The imbalances can be seen as either a “savings glut” or a “money glut.”

I believe from reading Wolf’s articles in the FT that the suggestion is that the savings glut nations not only have policies of fixing exchange rates to encourage exports over imports but also that the people in those nations have a much greater propensity to save than their Western counterparts. It is argued that this demand for money, certainly in USD, causes the Federal Reserve to embark on an expansionist policy.

From page 15 of Wolf’s presentation:

I interpret Wolf’s remarks to mean that when the massive accumulated USD reserves in the emerging nations were partially spent, a surge in liquidity arrived back at the shores of the USA, causing a housing bubble, subprime lending, less than secure CDO’s etc and the bust we now observe.

Wolf is in good company. It would seem that Federal Reserve Chairman Ben Bernanke has endorsed this view in at least the following two recent speeches.

The world is suffering through the worst financial crisis since the 1930s, a crisis that has precipitated a sharp downturn in the global economy. Its fundamental causes remain in dispute. In my view, however, it is impossible to understand this crisis without reference to the global imbalances in trade and capital flows that began in the latter half of the 1990s. In the simplest terms, these imbalances reflected a chronic lack of saving relative to investment in the United States and some other industrial countries, combined with an extraordinary increase in saving relative to investment in many emerging market nations. The increase in excess saving in the emerging world resulted in turn from factors such as rapid economic growth in high-saving East Asian economies accompanied, outside of China, by reduced investment rates; large buildups in foreign exchange reserves in a number of emerging markets; and substantial increases in revenues received by exporters of oil and other commodities. Like water seeking its level, saving flowed from where it was abundant to where it was deficient, with the result that the United States and some other advanced countries experienced large capital inflows for more than a decade, even as real long-term interest rates remained low.

Four Questions about the Financial Crisis

Importantly, in our global financial system, saving need not be generated in the country in which it is put to work but can come from foreign as well as domestic sources. In the past 10 to 15 years, the United States and some other industrial countries have been the recipients of a great deal of foreign saving. Much of this foreign saving came from fast-growing emerging market countries in Asia and other places where consumption has lagged behind rising incomes, as well as from oil-exporting nations that could not profitably invest all their revenue at home and thus looked abroad for investment opportunities. Indeed, the net inflow of foreign saving to the United States, which was about 1-1/2 percent of our national output in 1995, reached about 6 percent of national output in 2006, an amount equal to about $825 billion in today’s Dollars.

Saving inflows from abroad can be beneficial if the country that receives those inflows invests them well. Unfortunately, that was not always the case in the United States and some other countries. Financial institutions reacted to the surplus of available funds by competing aggressively for borrowers, and, in the years leading up to the crisis, credit to both households and businesses became relatively cheap and easy to obtain.

I submit that these two great economists have made a grave error. The government of the USA has legal tender laws that allow only it, ultimately, to create USD via its sanctioned agent, the US Federal Reserve. As it is in charge of the stock of Dollars and the fractional-reserve banking system, it is (counterfeiting aside) the sole source of all issuances.

If the pool of money is getting larger, there will be more Dollars to exchange for goods and services. If the quantity of goods and services offered for sale and the number of Dollars in circulation are growing at the same rate, it is possible to argue, if you are prepared to set aside the problems of relative prices, that the “general price level” will be unaffected. However, any economist would argue that if the supply of money increases faster than the supply of goods and services, prices will rise: like any other good, money is devalued by creating more of it.

Therefore, the cause of the crisis can be found only at the door of the monetary authority that created the money in the first place – i.e. the Federal Reserve and other deficit-nation central banks – and not with the saving glut nations. All they have done is seek to exchange some of their goods and services for some of the goods and services of the USA, expressing a time preference along the way. This transfer of ownership does not in itself “bid up prices” to create an “asset price boom”: it is the creation of new money which devalues it.

If new Dollars are locked away for a time and only return to their original economy in an abrupt fashion, they could well seem to be the cause of a sudden asset price bubble, but the prior cause can only be the creation and supply of the wherewithal to do this in the first place.

A Note on Mercantilism

Wolf mentions in his PowerPoint presentation quite rightly that the modern trade regime we have is “in short, a mercantilist hybrid”. Many of the Classical Economist and Political Philosophers such as Hume, Locke, Smith and in later times David Ricardo, point out in various writings that the bullion (gold and silver) that was invariably money was not wealth as such but that the goods they exchanged against were. So, create more money with no associated increase in productivity and the prices of things will rise. Consequently, the Mercantalist goal of having exports higher than imports and thus more bullion at home would just mean that prices would rise at home and cause a flow of that specie to move away from home. Therefore, if in the analogy you substitute US Dollars for bullion, our saving glut nations will get nowhere fast pursuing this policy.

Gold represented claims on already produced wealth. Thus it makes perfect sense that the more wealthy (industrially-devloped, capitalistic etc) countries had more gold historically. As we do not have a link to gold anymore, the USD acts in its capacity as the World Reserve Currency, like gold of old. Using this analogy, the gold producer / gold miner writ large is the Fed and other Central Banks. Dollars will flow away from the mine in exchange for goods and services and this causes a transfer of ownership of goods and services from people in the USA to people in the saving glut nations but can have nothing to do with asset price bubbles as the money was printed by the Fed and no one else. To argue that the savings glut itself has caused the asset price boom is seemingly to endorse the Mercantalist doctrine that was so clearly discredited many moons ago.

Some other reflections on this concept of a “Savings Glut” disturb me and lead me to question whether it is really a meaningful concept at all.

These saving glut nations still seem to have massive gluts but if spending the glut caused the bubble, you would expect the glut to have fallen as well; seemingly, it has not.

If nations save to create a glut, they must indeed refrain from consumption on domestic goods to boost the supply of export goods. This means cheap goods arrive on the shores of the deficit nations. Can this cause a boom across the economy? I think not.

The deficit nations are largely well-developed. As a 40-year-old entrepreneur with a mature business and a happy family, all well rooted in Hertforsdhire, I often say to my wife, “If I was 18 again, I would be straight out to China to exploit some of those massive developmental opportunities. The whole economy seems to be like Manchester was in the Victorian times.” So why do savings there, which should attract a greater rate of return there, not stay there?

In summary, the Fed has more than doubled its money supply since the mid 90’s as have other leading deficit nations. The savings glut and the boom and bust is only attributable to the lax money creation programs of irresponsbile central bankers around the world. They have a poor understanding of economic history and they make an intellectual mistake in misunderstanding what those Classical thinkers knew: money is not wealth.

A speech on the morality of taxation … Dr Eamonn Butler, a doctor of moral philosophy, provides 17 moral arguments against taxation in the report of…