A working paper for the Mercatus Centre:

The economic collapses of Iceland and Ireland after 2008 are the most severe in the developed world in recent history. This paper assesses five key differences in the causes of and responses to each country’s crisis. On the causal side, we look at (1) the role that deposit insurance served in artificially increasing risk-adjusted returns and (2) the subsequent increase in loanable funds that bred large and unsustainable financial sectors. On the response side we look at (1) the speed, transparency, and effectiveness of the nationalization of each country’s financial sector; (2) the decision whether to bail out key financial institutions or to allow them to fail; and (3) the differences in exchange-rate structures that created different recovery paths. We conclude by drawing policy conclusions for countries with large, unstable banking sectors, notably the United States. 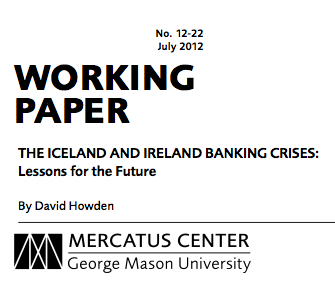 Written By
David Howden
More from David Howden
By Emiliana Disilvestro and David Howden Venezuela is currently going through its...
Read More

One reply on “The Iceland and Ireland banking crisis: lessons for the future”