On rare occasions I make specific, near-term market predictions, most recently in Q3 last year, when I called for a modest equity market correction. As it happened, only a tiny correction occurred, followed by a large subsequent rally taking the S&P500 index to 1,550 this week. Now I am making a similar if bolder prediction: A larger correction, possibly a crash (20%+), appears imminent. There are various fundamental and market technical reasons for this view but these all follow from the same ultimate cause: policymaker activism. The Fed and other major central banks ‘own’ this rally. If a crash occurs, and takes the global economy down with it, let’s place blame where it belongs.

The road to record highs

The old adage, “Don’t fight the Fed,” is one that many investors learn first-hand by taking losses. The printing press can be a powerful thing. But like most if not all powerful things, it has its limits. Think of a chess player able to choose which piece goes where. That might seem quite a power until faced with checkmate, when no further moves are possible.

Having stimulated a large increase in money and credit growth through QE in the second half of last year, the Fed now faces checkmate. Why is this so? Because the surge has now reversed as velocity has plummeted. Year to date, both broad money and private sector credit growth are zero even through the monetary base is growing at nearly a 70% annualised rate [1]. The Fed is, therefore, pushing as hard as ever, but still pushing on a string. Moreover, following on by far the largest amount of artificial fiscal and monetary stimulus ever thrown at the US economy, including during the Great Depression, the string is far longer than that which existed back in 2008.

THE MONETARY BASE HAS SURGED OF LATE… 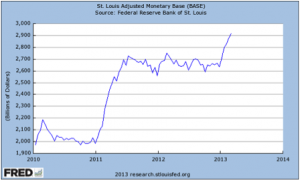 …BUT BROAD MONEY AND CREDIT GROWTH HAVE SUDDENLY SLOWED TO ZERO 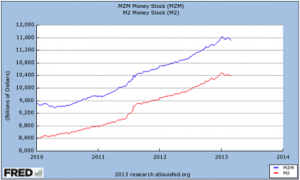 Although they will not admit this, the Fed is now essentially out of options. Recent talk about negative interest rates is just that: talk. As the NY Fed research staff have already noted, they could not work in practice [2]. Some will argue that there remains an arrow in the quiver, namely the power to outright monetise debt, public and private, and pro-actively debase the dollar. But this would end the dollar’s reserve currency status, something that would greatly reduce the Fed’s power in any case, and it would most probably lead quickly back to some form of global gold standard [3]. (While I and many other sound money advocates would endorse such a policy, I am well aware that the current Fed leadership abhors the thought of wearing a monetary straightjacket.)

It would not be accurate to claim, however, that the previous surge in money and credit growth did not impact the economy. Most probably it prevented the H2 2012 global growth slowdown from being larger than it was. More obvious is that strong growth in money and credit balances changed investors’ risk preferences, such that they decided to hold proportionately more equities than bonds. This has pushed up valuations for the former. Rotation out of bonds has had relatively little impact on prices, however, as the Fed has been buying large amounts of Treasuries and, importantly, primarily in longer maturities, where their buying activities have a much greater price impact as this compresses term premia. (Short-maturity bond prices are primarily a function of short-term interest rates, which are set by the Fed and which have been essentially zero since 2008.)

So notwithstanding the slowing economy, the Fed has engineered a large stock market rally. No doubt Fed officials are celebrating. Some investors might also be pleased, but it primarily benefits those who want to cash out at high valuations. Corporate insiders, for example, are selling at the fastest rate in years. Many companies are raising capital through either initial or secondary offerings. Such activity is a sign of a market top, however, and should concern the far larger ‘buy-and-hold’ crowd seeking to increase their wealth through a sustained rally.

There are several other reasons to be seriously concerned. First, consider valuations. Naturally a crash is more likely from elevated valuations than from depressed ones. Where are we now? Well, at 1,550, the S&P500 index is valued at around 14x forward earnings. That is not far above the post-1980 average, so may not appear lofty to some, but consider: This historical period includes many years of bubble-like valuations, including 1987, 1997-2000 and 2005-07. Depressed years, such as 1981-82 are less well represented in this sample.

Second, relying on forward earnings may be problematic as they are notoriously overstated relative to realised reality. In the present instance, forward earnings growth estimates are in the double-digits, even though profit margins are already at record highs. If history is a guide, profit margins are highly unlikely to remain this wide for long [4].

Third, the current rally has been characterised by steadily declining volumes. In other words, a relatively small number of transactions have been responsible for pushing up prices. This is in sharp contrast to some research suggesting that a ‘wall of cash’ has been pushing the market higher. (In any case, cash cannot directly push prices higher as for every cash buyer there is also a seller.)

Finally, let’s return to our starting point: Money and credit growth were strong in H2 2012 but this got little traction in actual economic activity. So what has this money and credit been used for? There is much evidence that it has been used as leverage to purchase shares. For example, margin interest on the NYSE is unusually high, at a level associated with previous market crashes.

What credit giveth, it can take away

Applying a little logic, if it is true that, courtesy of activist central bankers, the money and credit growth surge last year is behind the ongoing if increasingly low-volume rally in equities, then a sharp slowing or contraction of money and credit growth should trigger a sharp reversal. If accompanied by corporate profit warnings or other negative headlines, it could precipitate a crash.

As discussed, profit warnings are highly likely to continue in the current environment. Given that there has been nearly zero US household disposable income growth over the past year—in part due to the recent increase in payroll+Obamacare taxes—it is difficult to see how forward earnings expectations of 10%+ can possibly be met. Yes, the foreign sector might be doing better but recent dollar strength will depress those profits when accounted for in dollar terms. Slowing or contracting money and credit plus profit warnings could crash the market. Soon.

The bulls counter these arguments in various ways. Perhaps the most common bullish argument at present is that interest rates are low and will stay low as long as US unemployment remains elevated. After all, this is explicit Fed policy and I began this edition with “Don’t fight the Fed”. But if I’m right and the Fed and other central banks now face checkmate, it makes no difference. The Fed may try to stop a crash but short of trashing the dollar I doubt it can succeed. Of course, if the Fed does intervene and the dollar falls sharply, equity investors will still lose wealth in real if not nominal terms. Checkmate is checkmate.

At this point, the risk/reward for owning equities is tilted in favour of cash. Better still, if you believe that the Fed would at least try to arrest or reverse a crash with additional stimulus measures, would be to acquire safe haven real assets and liquid commodities that cannot be arbitrarily devalued by desperate central banks, including of course gold.

Speaking of gold, it has performed poorly of late. In my view the decline in the gold price is the mirror image of the decline in the equity risk premium. Once risk preferences shifted in favour of equities, yet money and credit growth slowed abruptly, it was absolutely necessary that certain other prices would decline. Not only gold, but copper, crude oil and most agricultural products have also fallen in price. By contrast, the Fed has directly prevented a material decline in bond prices through increased intervention.

Central banks probably have continued buying gold however, just as they were buying at a record pace last year. But as with all things, just because one sector of the market is buying doesn’t mean that prices can’t decline. For example, there are numerous recent reports of commodity hedge fund redemptions, implying forced liquidations of commodity positions. While some commodity hedge funds purport to be ‘market-neutral’, in my experience advising and working with such funds, I can assure you that most retain a long bias. Fund liquidations therefore imply net selling, not net buying.

I don’t disparage holding a commodity long bias, however. Regular readers of the Amphora Report know why: A long position in commodities is in effect a short position in currencies at risk of devaluation: Not just the dollar, but the euro, yen, sterling … you name it. Excessive debts and currency devaluation go hand in hand historically and I see no reason why this time should be different, other than devaluations will be more global than at any time since the 1930s. Indeed, there are reasons to believe they may be larger. Poor demographics and large public sectors in the developed economies imply unusually low productivity growth. This does not bode well for these economies’ abilities to service their vast accumulated debts without resort to large devaluations [5].

In closing, whether or not I am proven right by events, I would encourage my readers to ponder what, exactly, a rising stock market implies when it decouples from the real economy. In my view it is yet more evidence that resource misallocations are widespread; that investment decisions are being heavily distorted via manipulated interest rates and bond markets; that fundamental, value-driven investment is being ‘crowded out’ by raw, undisciplined speculation [6]. This is not the way to grow a healthy economy, although it can, and clearly has, provided short-term stimulus from time to time.

Investors think longer-term than speculators. They also think longer-term than politicians. What is happening now is that the short-termism for which politicians are frequently and rightly criticised has come to dominate the financial markets, the economy and, quite possibly, society generally. History is not kind to societies that operate in an arbitrary, risk-it-all and get-rich-quick way. Long-term investment, savings, thrift and the rule of law tend to result in better outcomes. Central banks are doing far, far greater damage than they realise.

[1] To see just how dramatic these money and credit developments are please see the relevant charts from the St Louis Fed’s weekly US financial data publication here.

[2] For a thorough discussion of the NY Fed paper on negative interest rates please see PAR FOR THE PATHOLOGICAL COURSE, Amphora Report vol. 3 (September 2012). The link is here.

[3] This is, in fact, the central thesis of my 2012 book, THE GOLDEN REVOLUTION, available on Amazon here.

[4] For an excellent discussion of the dangers of relying on forward earnings estimates please see this article by John Hussman here.

[6] This topic was explored at length in a previous Amphora Report, THE ASSET PRICING IMPLICATIONS OF THE GREAT BAILOUT, linked here.

This article was previously published in The Amphora Report, Vol 4, 13 March 2013.

One reply on “Assume the brace position”