“We have Stone Age emotions. We have medieval institutions.. And we have god-like technology.” – Edward O. Wilson.

The BBC reported last week that researchers from IBM had created the world’s smallest motion picture after manipulating individual atoms with a scanning tunnelling microscope. They separately reported the proposals of two Dutch engineers to introduce self-lighting weather warnings on motorways, and a dedicated driving lane that could recharge electric cars as they passed over it. As artist Daan Roosegarde pointed out, auto manufacturers spend billions of dollars on car design, research and development,

but somehow the roads.. are completely immune to that process. They are still stuck in the Middle Ages, so to speak.

Another staggering gulf lies between what we as individuals are capable of doing – more or less anything to which we put our minds – and what our governments are capable of doing – more or less nothing, other than mindlessly to continue the dismal and seemingly inexorable cycle of tax, borrow and spend. At a recent City debate hosted by Marcus Ashworth of Espirito Santo Investment Bank, ‘Is monetary activism the answer?’, Steve Baker MP and Ewen Stewart of Walbrook Economics essentially revealed the paucity of government thinking through generations, and across the political spectrum, that gave rise to such a desperate question in the first place.

As the graph below makes clear, in duration – if not necessarily in scale – the current economic crisis is now worse than the Great Depression. There are realistically just two schools of thought as to how an economic depression should be tackled. The neo-Keynesians advocate deficit spending, on the basis that government stimulus is merely taking the other side of a retrenching private sector. As the facile mud-slinging over Reinhart & Rogoff’s recent debt research reveals, the idea that a state can simply have too much debt for its own good gets little traction in the neo- Keynesian camp, which effectively suspends respect for mathematics, logic or sound economics whenever it happens to suit. The Austrians, on the polar opposite side of the debate, advocate a policy of non-interference with the free market process of economic adjustment. Less euphemistically, the Austrian perspective favours what Depression-era US Treasury Secretary Andrew Mellon recommended as painful but ameliorative policy:

Liquidate labour, liquidate stocks, liquidate farmers, liquidate real estate.. it will purge the rottenness out of the system. High costs of living and high living will come down. People will work harder, live a more moral life. Values will be adjusted, and enterprising people will pick up from less competent people. [Emphasis ours.] 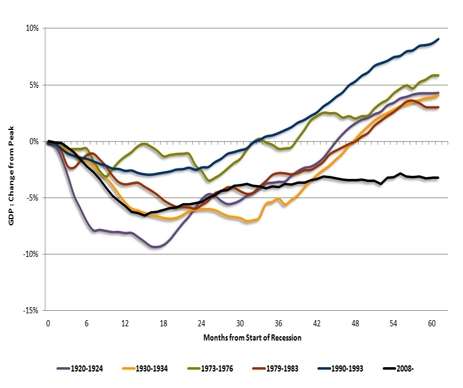 As we wrote back in January 2012, we side with the Austrians, specifically Murray Rothbard, and his classic study, ‘America’s Great Depression’:

If government wishes to see a depression ended as quickly as possible, and the economy returned to normal prosperity, what course should it adopt ? The first and clearest injunction is: don’t interfere with the market’s adjustment process. The more the government intervenes to delay the market’s adjustment, the longer and more gruelling the depression will be, and the more difficult will be the road to complete recovery.

Thus far, on the basis alone of the recession chart above, Rothbard would appear to be winning the debate. There is no counter-factual, of course, from the 1930s – Roosevelt’s ‘New Deal’ intervened (in every sense). But it is both interesting and relevant to note Treasury Secretary Mellon’s earlier objective, namely to tackle the US’ vast federal debt load accumulated from World War One. This he did by taking an axe to income tax rates. The top marginal tax rate was cut

So, to return to the monetary activism debate, how did we get here ? Steve Baker lays it all out. In essence, the state has eaten itself. Before World War One, as the graph below reveals, UK government spending never accounted for much more than 10% of the economy. Now it accounts for almost half of it.

So we are not merely facing a financial crisis but in Steve Baker’s words, we are also beset by a profound crisis of political economy. Governments whose spending has spiralled out of control typically resort to three expedients: more taxation; more borrowing; and currency debauchery. As government spending crowded out the productive sector throughout the 20th Century, the extent of inflation over recent decades has been monstrous:

Since a substantial number of the advocates for yet more government borrowing are pressing for a narrowly Keynesian response, it is worth republishing what Keynes himself thought of the inflationary outcome:

By a continuing process of inflation, governments can confiscate, secretly and unobserved, an important part of the wealth of their citizens. By this method they not only confiscate, but they confiscate arbitrarily; and, while the process impoverishes many, it actually enriches some. The sight of this arbitrary rearrangement of riches strikes not only at security, but at confidence in the equity of the existing distribution of wealth..

..There is no subtler, no surer means of overturning the existing basis of society than to debauch the currency. The process engages all the hidden forces of economic law on the side of destruction, and does it in a manner which not one man in a million is able to diagnose.

So the business of investing can no longer be conducted in a rational economic environment. Free market cleansing of malinvestments made during the boom years cannot occur because the free market itself has been suspended. Overmighty governments and their economic agents, notably the central banks, are once again showing the futility of a policy of supporting national champions – those champions today, ironically, being banks that would under any other environment be forced into insolvency. This is not a problem existentially limited to the UK. It afflicts most of the “developed” western economies – developed in the sense that a body riddled with cancer can be said to be “developed”.

So we do the best job we can under such extreme circumstances. We take shelter in credit of unimpeachable quality (not Gilts or US Treasuries) as an alternative to sitting idly in useless cash. We sail close to shore within attractively valued listed equity investments of businesses catering to a constituency of rising wealth (the Asian domestic consumer, for example) instead of one catering to the bombed-out, tapped-out, over-indebted and over-taxed western consumer. We diversify further into uncorrelated managed funds, and we diversify still further into currency that cannot simply be printed into exhaustion: the precious, monetary metals whose fundamental values are still so widely misunderstood in such a bleakly dishonest financial landscape. And we wait – and now actively agitate – for the sort of political radicals capable of understanding both how we got into this mess, and how we might shrink the overmighty state in order to get out of it. It may be a long wait. People, notably political zealots, have a tendency to cling to irrational beliefs rather than sound thinking. As Edward O. Wilson once said,

Men would rather believe than know.