There has been considerable throughput of gold in western capital markets, with substantial buying from all round the world following the April price crash. The supply can only have come from two sources: the general public, or one or more governments. It really is that simple. Two months later the gold price has only partially recovered, so physical supplies have continued to be made available. Physical demand cannot have been entirely satisfied by ETF liquidations, confirming governments are involved. This article looks at the dynamics of the gold market around this event and the implications.

While the investing public in the western nations has been generally stunned following the April price smash, demand from Asia is running at record levels, illustrated in the chart below, which is of physical gold deliveries on the Shanghai Gold Exchange. (Thanks due to @KoosJansen for pointing me to the data on the SGE’s Chinese website).

The increase in deliveries for April and May was spectacular, totalling 460.5 tonnes, with the week ending 26 April alone seeing phenomenal deliveries of 117 tonnes. In addition, according to the Economic Times,India imported 142.5 tonnes in April and 162 tonnes in May, compared with an average monthly rate of 86 tonnes in Q1 2013. Therefore these two countries imported 765 tonnes of gold in two months, before considering any unofficial imports or their government purchases in foreign markets. The rest of Asia, from Turkey to Indonesia would certainly have stepped up their demand for gold as well, as did the western world itself for physical metal as opposed to paper entitlements.

The table below puts this into context. 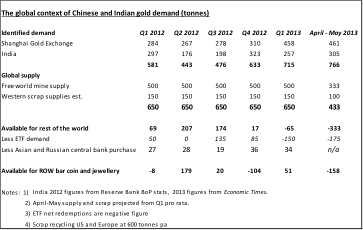 A prefatory note about the statistics in this table: there is no single defined source of statistics on gold movements, and there are considerable variations in the same numbers reported by different organisations. The figures in the table above can only illustrate bullion flows. I have sourced the statistics from official sources where possible. The cash-for-gold business has had the easy pickings by now, so an assumption that this is about 600 tonnes per annum is I believe cautiously over-generous. It is based on a speech made by Jeffrey Rhodes of INTL Commodities DMCC to the LBMA in 2010, when he identified scrap supply as 583 tonnes in North America and Europe, whose central banks are in the gold suppression business. At that time, 1,091 tonnes were recycled in the East, including Turkey. Since the Chinese, Russian and other gold-producing governments of Central Asia retain most if not all of their domestically mined gold amounting to over 700 tonnes, there is less than 2,000 tonnes of free mine supply annually available for global markets, based on US Geological Survey figures.

Looking at the bottom line for 2012, there were only 87 tonnes of gold supply for the rest-of-the-world, after Asian and Russian central bank and global ETF purchases. In other words, there must have been a severe deficit overall, which can only have been covered by central bank sales.

About 150 tonnes of ETF gold were liquidated in Q1, providing temporary relief until the Cypriot crisis, when concerns over the security of large deposits in eurozone banks prompted a flight into physical gold, but interestingly, not into ETFs. This was because there were escalating systemic concerns over having physical gold and currency deposits with European banks, while at the same time portfolio investors were worried that the 12-year bull market might have ended.

From the point of view of the western central banks, as well as the bullion banks with short positions on Comex, in March the alarm bells must have been ringing loudly. Chinese demand was accelerating and there was an increasing likelihood that ETF liquidation would cease if the gold price stabilised. If that happened, as the table above clearly shows, an epic bear-squeeze would likely develop, fuelling a rush into gold and potentially bankrupting many of the bullion banks short in the futures markets and/or offering unallocated accounts on a fractional reserve basis.

Therefore, investors had to be dissuaded from buying gold, otherwise the ensuing crisis would not only cause a market failure that could spread to other derivatives (particularly silver), but it would come at the worst possible time, given the coincidental programme of monetary expansion currently being undertaken by all the major central banks.

The reasons for governments to intervene on the side of the bullion banks were therefore compelling. As one would expect, the intervention was well-timed: on Friday 12 April two large sell orders of 100 and 300 tonnes were placed on Comex, clearly designed to do maximum damage to the price, and setting it up for all remaining stops to be taken out the following Monday. Furthermore, central banks were prepared to supply physical gold to keep the price from recovering. We know this because lower prices generated a surge in private demand, not only in China and India, but from everywhere. The only possible supply, other than inadequate ETF liquidation, is from governments.

India and China have absorbed enough gold in the last two months of April and May to leave the rest of the world in a supply deficit, requiring matching sales of western government gold to continue to suppress the price.

We now know for certain that government-controlled gold has been used to defuse a developing crisis in gold markets that had the potential to destabilise bullion banks, other derivative markets and ultimately the whole fiat currency system. We have seen the surge in demand for physical gold, which is the consequence of sharply lower prices. Realistically, the priority has been to ensure such a crisis is avoided, rather than for the price of gold to be continually suppressed.

The difficulty for the casual observer is compounded by the available information being one-sided. We are all painfully aware of both the losses inflicted on investors and their loss of faith in gold at a time when other investment media, such as stocks and bonds, have been doing well. Concealed from us is the real financial condition of the banks and governments themselves, which is the fundamental reason for owning gold. We are acutely aware of the sellers’ pain and only dimly aware of the buyers’ motivation.

Nervous western investors in a market of 160,000 tonnes are in truth a small part of the whole, particularly since gold has been migrating from the west to the east where it has been more valued ever since the 1970s oil crisis. More fundamentally we know that the stock of gold grows at about 1½% annually in line with global population growth. We also know that central banks everywhere are expanding their balance sheets at an accelerating rate. The disparity between the rate of growth for gold and paper currencies will certainly lead to increased tensions between precious metals and currencies generally, and it is this that will drive future demand for gold, not whether western investors think it is in a bull or bear market.

A second point about the market being 160,000 tonnes and not just the sum of mine and scrap supply is that the market is far bigger than western governments’ gold reserves. Gold held by them is officially about 19,000 tonnes, but it may well be only half that, or 5% of the aboveground stock, when unrecorded leasing and selling over the last 25 years are taken into account. The ability of central banks to contain a global surge in gold demand such as that which followed the April price-crash and continuing to this day is therefore limited.

But this is only a part of the story. There are the factors concealed from us, such as the buying opportunity given to gold-friendly governments and sovereign wealth funds, both with surplus dollars, as well as the appetite for gold from the growing ranks of the Russian and Asian mega-rich. There are factors known to the financially savvy, such as the growing instability of the Indian rupee and other emerging market currencies, the increasing systemic risks in eurozone banks with the threat posed to deposits, and the revenue shortfalls that force governments to raise money by printing their currencies at an increasing pace: all will impact the gold market in coming months.

These and other systemic problems are deteriorating. A potentially destabilising crisis in the gold market from runaway prices has been defused by allowing the bullion banks the space to square their books. There can be no other realistic objective in supplying government-owned gold into the market. As to the embarrassment of the gold price rising at a time of accelerating money printing – that will have to be accepted, presumably emphasising the official line, that the gold price is irrelevant to a modern economy.

16 replies on “Gold is being supplied by western governments”