“We have the best government that money can buy.” – Mark Twain.

It says a lot about the financial establishment that the most revelatory coverage of the worst financial crisis in living memory has appeared, not in the pages of ‘The Financial Times’ or ‘The Wall Street Journal’, but in those of ‘Vanity Fair’ and ‘Rolling Stone’. In the first example, former bond salesman Michael Lewis displayed the finest characteristics of investigative journalism whilst exploring the more ridiculous examples of modern greed and credit-based insanity in forensic detail. In the second, Matt Taibbi broke new ground in gonzo journalism as he tilted against the previously impregnable windmills of Wall Street, giving us in the process the immortal description of the taxpayer-rescued brokerage firm Goldman Sachs as “a giant vampire squid wrapped around the face of humanity, relentlessly jamming its blood funnel into anything that smells like money”. In the latest iteration of serious economic and cultural analysis arising from a non-mainstream source, we now have ‘Life After The State’ – a critique of government written by a stand-up comedian.

In Dominic Frisby’s defence, he wears multiple hats. As his Twitter profile puts it, he is an “Accidental financial bod, MoneyWeek writer, comedian, actor of unrecognized genius, voice of many things, & presenter.” And now an author. Published by the crowd-funding website Unbound, ‘Life After The State’ follows hot on the heels of Douglas Carswell’s ‘The End Of Politics’ and Guy Fraser-Sampson’s ‘The Mess We’re In’, and each attempts to address a nagging feeling from a slightly different perspective. That feeling was well expressed recently by the outspoken investor Paul Singer of Elliott Management when he remarked, almost in passing, that

America is deeply insolvent, and for that matter, so are most of continental Europe, the UK and Japan.

Or to put it another way, what the hell just happened, and why ?

The answer, and the beast that has to be slaughtered for any hope of progress and recovery, is Big Government. Many readers will doubtless respond that any retrenchment by an over-mighty State is simply wishful thinking. Some of us might respond in turn that it is actually a mathematical certainty. But Dominic, early on, spikes the guns of scepticism by citing the anonymous internet poster known as ‘Injin’:

Frédéric Bastiat’s broken window fallacy also gets an early airing, which is entirely justifiable – it’s one of the most powerful ideas in the history of economics. We can ‘see’ what in the economy gets spent (by Big Government, having raided our wallets first, or worse, the wallets of those as yet unborn), but we cannot ‘see’ how that money might have been spent in the absence of Big Government. And there are only four ways of spending money. We can spend our money on ourselves. Which is nice. Or we can spend it on other people. Which is quite nice. We can spend other people’s money on ourselves (generally illegal). Or we can spend other people’s money on other people, which is what government actually does, and which tends to lead to malinvestment, waste, zombie banking, and so on. Happily, although there’s no shortage of economics in ‘Life After The State’, it’s all painlessly incorporated into the general argument, which makes for a highly readable and engaging book.

Another powerful idea arises in Chapter 8, and it’s a killer – quite literally. If governments had been separated from their monopoly control to print money, World War I would have been over by Christmas 1914.

Neither the British nor the German governments had the money, or gold, to pay for it. Both came off the gold standard and printed the money they needed. Had either government not had the power to print money or create debt – i.e. if they did not have control of money – the war would have had to stop.. Think about the implications.. German reparations.. Weimar hyperinflation.. the rise of Hitler..

And the same holds for almost all wars.

No war has ever been fought on a cash basis. Costs are concealed by deficit spending. If taxes had to rise concomitantly in the same year that wars were being fought, people would not pay. Instead, the cost is added to the national debt. People don’t have to pay £10 billion this year; instead they pay an extra £500 million every single year for eternity in interest on the national debt. Take away this power to create money and run deficits, and you suddenly limit the scope of the war to the amount of money the government has. In other words you limit government power – and you limit the damage that they can do. That alone is reason enough to separate money and state.

‘Life After The State’ is particularly good as a primer on gold, sound money and inflation. The anecdotal always helps, for context.

But the price of oil in US dollars has gone from $3.50 a barrel in 1972 to around $100 now. That’s something like a.. 96% loss in purchasing power. The same goes for all modern government currencies, which buy you less and less each year: less house, less chocolate bar, less anything. In 1971 I could have taken my son to the FA Cup Final for £2 (now over £100). The Mars bar I bought him at half-time would have been 2p (now 60p). The beer I bought myself would have been 11p (now £5 a pint at Wembley). The gallon of petrol I needed to get me there and back would have been 33p (now £7). And the house we went home to would have been something like 40 times cheaper.

The State is so entrenched in our lives it is sometimes difficult to imagine life without it. It “looks after the birth of the baby, educates the child, employs the man, cares for the aged, and buries the dead.” But in doing so it also spends £700 insuring each birth against negligence claims; while it educates the child, there can be no guarantee that it does so well – no matter, the examination pass rates, like the currency, can easily be inflated; the man may be employed, but not gainfully so..

On Thursday last week, the newspaper of the neo-Keynesian financial establishment, ‘The Financial Times’ had room for three stories on its front page. One of them covered the resignation of Barclays’ head of compliance, Sir Hector Sants, on the grounds of stress and exhaustion (cue mass playing by an orchestra of the world’s smallest violins). Sir Hector was previously chief executive of the Financial Services Authority, an arm of Big Government – in other words, not a particularly successful one, if current financial scandals and the health of the banking system are any guide. Another detailed how a Prime Minister evidently deeply committed to free markets was pressing mobile phone companies to cut their bills to customers. If David Cameron were really serious about inflation, though, he would be advised to pay closer attention to what Mark Carney has been up to at the Bank of England. The FT’s main story, ‘Rate rise signalled for 2014 as UK recovery takes hold’, was accompanied by a photograph of Mr. Carney looking for all the world like an evil little elf (for all we know, perhaps he is one). 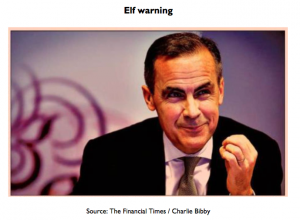 Apparently the Bank of England is now considering a UK rate hike as soon as next year, and 18 months sooner than previously expected by the market. One wonders what all those first-time buyers lured into buying property by the government, the Bank of England and their easy money policies, might make of that.

Written By
Tim Price
More from Tim Price
“Individuals who cannot master their emotions are ill-suited to profit from...
Read More