According to commentators, sanctions imposed by the US and the European Union are pushing Russia towards a recession. However, we hold that some key Russian economic data have been displaying weakening prior to the annexation of Crimea to Russia. This raises the likelihood that sanctions might not be the key factor for an emerging recession. 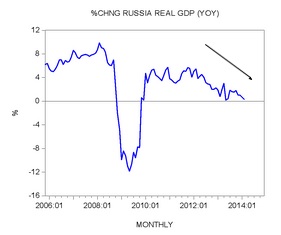 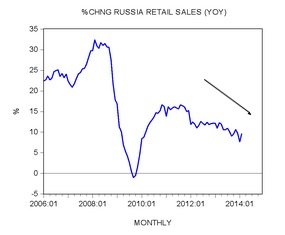 We suggest that the key factor behind any emerging slowdown and a possible recession is a sharp decline in the yearly` rate of growth of money supply (AMS) from 67.1% in May 2005 to minus 12.2% by September 2009. We hold that the driving force behind this sharp decline is a strong decline in the growth momentum of the central bank’s balance sheet during that period (see chart).

There is a long time lag from changes in money supply and its effect on economic activity. We suspect that it is quite likely that the effect from a fall in the growth momentum of money during May 2005 to September 2009 is starting to dominate the present economic scene.

This means that various bubble activities that emerged on the back of the prior strong increase in money supply are at present coming under pressure. So from this perspective irrespective of sanctions, the Russian economy would have experienced a so-called economic slowdown, or even worse a recession.
Now, to counter a further weakening in the ruble against the US$ the Russian central bank has raised the seven day repo rate by 1.5% to 7%. The price of the US$ in ruble terms rose to 36.3 in March from 30.8 rubles in March last year – an increase of 18%.

Whilst a tighter interest rate stance can have an effect on the present growth momentum of money supply this is likely to have a minor effect on the emerging economic slowdown, which we suggest is predominately driven by past money supply.

There is no doubt that if sanctions were to become effective they are going to hurt economic activity in general i.e. both bubble and non-bubble activities.

On this one needs to exercise some caution given the possibility that major world economies are heading toward a slower growth phase.

Hence from this perspective, regardless of sanctions the pace of the demand for the Russian exports is likely to ease.

We hold that it is quite likely that the Euro-zone, an important Russian trading partner, is unlikely to enforce sanctions in order to cushion the effect of the possible emerging economic slowdown in the Euro-zone. (Sanctions are likely to have a disruptive economic effect not only on Russia but also on the Euro-zone). Observe that Russia’s export to the Euro-zone as a percentage of its total exports stood at 54.1% in 2013 against 52.9% in 2012. In contrast Russia’s export to the US as a % of total stood at 2.1% in 2013. As a percentage of total imports Euro-zone imports from Russia stood at 8% in January whilst American imports from Russia as a percentage of total imports stood at 0.8%. Note that the Euro-zone relies on Russia for a third of its energy imports. Hence it will not surprise us if the Europeans are likely to be more reluctant than the US in enforcing sanctions.

Russia’s foreign reserves have weakened slightly in February from the month before. The level of reserves fell by 1.1% to $493 billion after declining by 2.1% in January. The growth momentum of reserves also remains under pressure. Year-on-year the rate of growth stood at minus 6.2% in February against a similar figure in January. A possible further weakening in China’s economic activity and ensuing pressure on the price of oil is likely to exert more pressure on foreign reserves.

According to some experts sanctions imposed by the US and the European Union are likely to push Russia into a recession. We suggest that the key factor which is likely to push Russia into a recession is not sanctions as such but a sharp decline in the growth momentum of money supply between May 2005 and September 2009. Given the possibility that major world economies are heading towards a renewed economic slowdown, we suggest that regardless of sanctions the pace of the demand for Russia’s exports is likely to ease. Now, given that the Euro-zone relies on Russia for a third of its energy imports it will not surprise us if the Euro-zone proves likely to be more reluctant than the US in enforcing sanctions.

4 replies on “Are economic sanctions behind a possible recession in Russia?”