The following text is from the notes I made of a talk that I gave to the “End of The World Club” at the Institute of Economic Affairs on 18 April 2014.

If there is one feature of human society that makes it successful, it is the capacity that human beings have of choosing to satisfy short-term appetites or to defer gratification. This ability to distinguish between short term and long term interests is at the heart of economics. 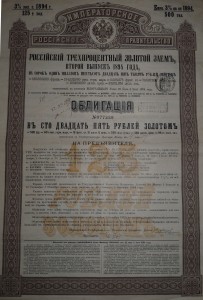 But why defer consumption? Why save at all?

One reason is the transmission of wealth from one generation to the next. Another is to ensure security in hard times.

A complaint of American academics about French savings in the 19th century is that they were too conservative. Easy for them to say.

The population of France grew more slowly than any other industrialising nation in the 19th century (0.2% per year from 1870 to 1913, compared with 1.1% for Germany and 0.9% for Great Britain). The figures would be even worse if emigration from the British Isles were added to the headcount.

This slower rate of population growth would tend to mean a slower rate of economic growth: smaller local markets, fewer opportunities for mass production. This was well known to be a problem in France. In fact Jean-Baptiste Say was sent to England in 1815 to study the growth of English cities such as Birmingham and its effect on the economy (here in French).

The causes of low investment must surely include political and social instability.

If instability discourages savings, it is remarkable how much there actually was.

Five billion francs in gold, raised by public subscription to pay for the German army of occupation to leave France after the Franco-Prussian War. The amount was supposed to be impossible to pay and designed to provide an excuse for a prolonged German occupation. It was paid in full in two years. 80% of the money (equivalent to over two and half times the national government’s total annual spending, was raised in one day).

What the modern academics decried was that these sorts of sums weren’t invested in industry or agricultural technology. In 1880, French private investments amounted to 7.3 billion Francs, but this was less than half of all investments (48%), versus 52% for government bonds.

You can’t pick up your factory machines and run away from the Uhlans, or the Communards.
Gold was one preferred wealth storage option. It still is in France.

Government bonds were generally considered a good deal: backed by the power of taxation, and, unlike gold, they earned interest.

One constant concern of French governments in the 19th century was the diplomatic isolation enforced by the 1815 Congress of Vienna. Various attempts were made to break this, some successful like the split of Belgium from the Netherlands in 1830, the Crimean War (co-operation with the British), others failed (Napoleon III’s Mexican adventure, the Franco-Prussian War).

By 1882, Germany looked like getting economic and military supremacy in Europe, with an Triple Alliance with Austria-Hungary and Italy. With the British playing neutral, the best bet was to build up Russia.

The first Russian bonds sold in France were in 1867 to finance a railroad. Others followed, notably in 1888. At this point the French government decided on a policy of alliance with Russia and the encouragement of French savers to invest in Russian infrastructure. From 1887 to 1913, 3.5% of the French Gross National Product is invested in Russia alone. This amounted to a quarter of all foreign investment by French private citizens. That’s a savings ratio (14% in external investment alone) we wouldn’t mind seeing in the UK today!

A massive media campaign promoting Russia as a future economic giant (a bit like China in recent years) was pushed by politicians. Meanwhile French banks found they could make enormous amounts of commission from Russian bonds: in this period, the Credit Lyonnais makes 30% of its profits from it’s commission for selling the bonds.

In 1897, the ruble is linked to gold. The French government guarantees its citizens against any default. The Paris Stock Exchange takes listings for, among others: Banque russo-asiatique, la Banque de commerce de Sibérie, les usines Stoll, les Wagons de Petrograd.

The first signs of trouble come in 1905, with the post-Russo-Japanese War revolution. A provisional government announced a default of foreign bonds, but this isn’t reported in the French mainstream media or the French banks that continue to sell (mis-sell?).

During the First World War, the French government issued zero interest bonds to cover the Russian government’s loan repayment, with an agreement to sort out the problem after the war. However, in December 1917, Lenin announced the repudiation of Tsarist debts.

The gold standard was abolished, allowing the debasement of the currency, private citizens were required to turn over their gold for government bonds.

Income tax was introduced (with a top rate of 2%) after the assassination in Sarajevo of the Archduke Ferdinand and his wife.

In 1923, a French parliamentary commission established that 9 billion Francs had effectively been stolen from French savers in the Russian bonds affair. Bribes had been paid to bankers and news outlets to promote the impression of massive economic growth in Russia. Many of the later bonds were merely issued to repay the interest on earlier debt. 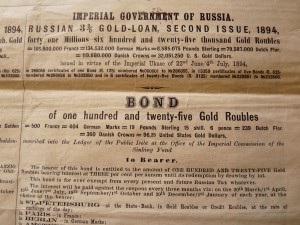 For the next 70 years, protest groups attempted to obtain compensation, either from the Russian government or from the French government that had provided “guarantees”. You won’t be surprised to know that some banks managed to sell their bonds to private investors after 1917, having spread false rumours that the Soviets would honour the bonds.

Successive French governments found themselves caught between the requirements of “normal” relations with the USSR and the clamour of dispossessed savers and their relatives.

In November 1996, the post-Soviet Yelstin government agreed a deal to settle the Russian bonds for $400 million. The deal covered less than 10% of the families demanding compensation. Despite this, 316,000 people are thought to have received some compensation, suggesting that over 3 million families were affected by the Russian bonds scandal.

There are similarities with the present day but also significant differences.

First, the role of government guarantees and links with favoured banks, ensuring savers were complacent.

Second the manipulation of economic data by the Russian government, which looks a lot like what’s been happening in China.

Third the fragility of the situation: war can break out. All sorts of assumptions we can make about safe investments go out of the window.

One specifically French response to all this is something I would like to see an academic study of. What changes to consumption and savings would follow from growing up in a family where savings have been wiped out by government action (Russian or one’s own)? If three million people were directly involved, most French people would have known someone who had deferred consumption and been robbed. To what extent does the post-1945 explosion in mass consumption in France reflect a view that deferring consumption is foolish when savings can be stolen with the connivance or lack of concern of one’s own government?

Sean Corrigan introduces his article In Default of Sanity by quoting Plutarch, Pericles, Ch 9‐14: In the beginning… he tried to ingratiate himself with…