“When Nobel Prize-winner Joseph Stiglitz was asked in Germany this week if the country and its neighbours would suffer a lost decade, his response was unequivocal. “Is Europe going the same way as Japan ? Yes,” Mr Stiglitz said in Lindau at a meeting for Nobel laureates and economics students. “The only way to describe what is going on in some European countries is depression.”

Few films have managed to convey the feeling of approaching menace more effectively than Jeff Nichols’ 2011 drama, ‘Take Shelter’. Its blue collar protagonist, Curtis LaForche, played by the lantern-jawed Michael Shannon – whose sepulchral bass tones make his every utterance sound like someone slowly dragging a coffin over a cello – begins to suffer terrifying dreams and visions; he responds by building a storm shelter in his back yard. It transpires that his mother was diagnosed with schizophrenia at a similar stage in her own life. Are these simply hallucinations ? Or are they portents of darker things to come ?

Nichols, the film’s writer and director, has gone on record as stating that at least part of the film owes something to the financial crisis:

“I think I was a bit ahead of the curve, since I wrote it in 2008, which was also an anxious time, for sure, but, yeah, now it feels even more so. This film deals with two kinds of anxiety. There’s this free-floating anxiety that we generally experience: you wake in bed and maybe worry about what’s happening to the planet, to the state of the economy, to things you have no control over. In 2008, I was particularly struck with this during the beginning of the financial meltdown. Then there’s a personal anxiety. You need to keep your life on track—your health, your finances, your family..”

There’s a degree of pretention in claiming to have a reliable read on the psychology of the marketplace – too many participants, too much intangibility, too much subjectivity. But taking market price index levels at face value, especially in stock markets, there seems to be a general sense that since the near-collapse of the financial system six years ago, the worst has passed. The S&P 500 stock index, for example, has just reached a new all-time high, leaving plenty of financial media commentators to breathlessly anticipate its goal of 2,000 index points. But look at it from an objective perspective, rather than one of simple-minded cheerleading: the market is more expensive than ever – the only people who should be celebrating are those considering selling.

There are at least two other storm clouds massing on the horizon (we ignore the worsening geopolitical outlook altogether). One is the ‘health’ of the bond markets. Bloomberg’s Mark Gilbert points out that Germany has just issued €4 billion of two year notes that pay no interest whatsoever until they mature in 2016. The second is the explicitly declining health of the euro zone economy, which is threatening to slide into recession (again), and to which zero interest rates in Germany broadly allude. The reality, which is not a hallucination, is that years of Zero Interest Rate Policy everywhere and trillions of dollars, pounds, euros and yen pumped into a moribund banking system have created a ‘Potemkin village’ market offering the illusion of stability. In their June 2014 letter, Elliott Management wrote as follows:

“..Stock markets around the world are at or near all-time nominal highs, while global interest rates hover near record lows. A flood of newly-printed money has combined with zero percent interest rates to keep all the balls suspended in the air. Nonetheless, growth in the developed world (US, Europe and Japan) has been significantly subpar for the 5 ½ years following the financial crisis. Businesses have been reluctant to invest and hire. The consumer is still “tapped out,” and there are significant suppressive forces from poor policy, including taxes and increased regulation. Governments (which are actually responsible for the feeble growth) are blaming the shortfall on “secular stagnation,” purportedly a long-term trend, which enables them to deny responsibility..

“The orchestra conductors for this remarkable epoch are the central bankers in the US, UK, Europe and Japan. The cost of debt of all maturities issued by every country, corporation and individual in the world (except outliers like Argentina) is in the process of converging at remarkably low rates. In Greece (for goodness sake), long-term government debt is trading with a yield just north of 5%. In France, 10 year bonds are trading at a yield of 1.67%.

“..Sadly, financial market conditions are not the result of the advancement of human knowledge in these matters. Rather, they are the result of policymaker groupthink and a mass delusion. By reducing interest rates to zero and having central banks purchase most of the debt issued by their governments, they think that inflation can be encouraged (but without any risk that it will spin out of control) and that economic activity consequently can be supported and enhanced. We are 5 ½ years into this global experiment, which has never been tried in its current breadth and scope at any other time in history.. the bald fact is that the entire developed world is growing at a sluggish pace, if at all. But governments, media, politicians, central bankers and academics are unwilling to state the obvious conclusion that their policies have failed and need to be revised. Instead, they uniformly state, with the kind of confidence only present among the truly clueless, that in the absence of their current policies, things would be much worse.”

Regardless of the context, stock markets at or near all-time highs are things to be sceptical of, rather than to be embraced with both hands. Value investors prefer to buy at the low than at the high. The same holds for bonds, especially when they offer the certainty of a loss in real terms if held to maturity. But as Elliott point out, the job of asset managers is to manage money, and not to “hold up our arms and order the tide to roll back”. (We have written previously about those who seem to believe they can control the tides.) So by a process of logic, selectivity and elimination, we believe the only things remotely worth buying today are high quality stocks trading at levels well below their intrinsic value.

We recently wrote about the sort of metrics to assess stocks that can be reliably used over the long run to generate superior returns. Among them, low price / book is a stand-out characteristic of value stocks that has generated impressive, market-beating returns over any medium term time frame. So which markets currently enjoy some of the most attractive price / book ratios ?

The four tables below, courtesy of Greg Fisher and Samarang Capital, show the relative attractiveness of the Japanese, US, Vietnamese and UK markets, as expressed by the distributions of their price / book ratios. Over 40% of the Japanese market, for example, trades on a price / book of between 0.5 and 1. We would humbly submit that this makes the Japanese market objectively cheap. The comparative percentage for the US market is around 15%. 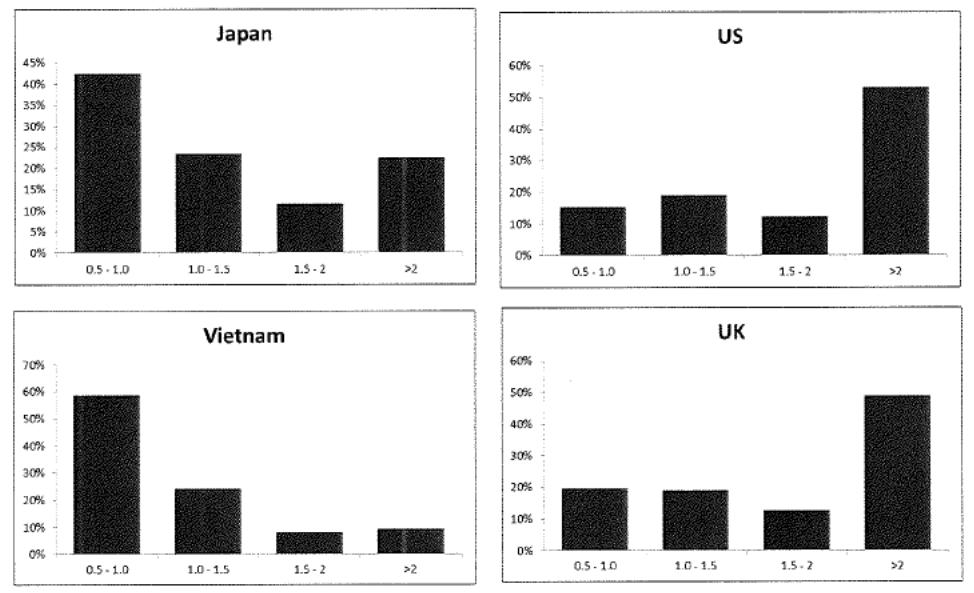 Even more strikingly, nearly 60% of the Vietnamese stock market trades on a price / book of between 0.5 and 1. The comparative figure for the UK market is approximately 20%.

Conversely, nearly 60% of the US market trades on a price / book of above 2 times. We would humbly submit that this makes the US market look expensive. There is clearly a world of difference between a frontier market like Vietnam which is limited by way of capital controls, and a developed market like that of the US which isn’t. But the price / book ratio is a comparison of apples with apples, and US stock market apples simply cost more than those in Japan or Vietnam. We’d rather buy cheap apples.

As clients and longstanding readers will appreciate, we split the investible universe into four asset classes: high quality credit; value equity; uncorrelated funds; and real assets, notably precious metals. As a result of the extraordinary monetary accommodation of the past six years or so, both credit markets and stocks have been boosted to probably unsustainable levels, at least in the West. Uncorrelated funds (specifically, trend-following funds) and gold and silver have recently lagged more traditional assets, though we contend that they still offer potential for portfolio insurance when the long-awaited storm of reality (financial gravity) finally strikes. But on any objective analysis, we think the merits of genuine value stocks are now compelling when set against any other type of investment, both on a relative and absolute basis. Increasingly desperate central banks have destroyed the concept of safe havens. There is now only relative safety by way of financial assets. The mood music of the markets is becoming increasingly discordant as investors (outside the euro zone at least) start to prepare for a turn in the interest rate cycle. There is a stark choice when it comes to investment aesthetics. Those favouring value and deep value investments are, we believe, more likely to end up wearing diamonds. Those favouring growth and momentum investments are, we believe, more likely to end up wearing the Emperor’s new clothes. We do not intend to end up as fashion victims as and when the storm finally hits.

Written By
Tim Price
More from Tim Price
“We have involved ourselves in a colossal muddle, having blundered in the...
Read More

One reply on “Storm warning”