Together with colleagues spanning four parties – Michael Meacher (Lab), Caroline Lucas (Green), Douglas Carswell (UKIP) and David Davis (Con) – I have secured a debate on Money Creation and Society for Thursday 20 November. Here’s a quick guide to understanding the debate.

First, we have a system of paper or “fiat” money: it exists due to legal mandate as opposed to being a physical commodity like gold. Reserves, notes and coins are created by the state but claims on money are created by the banks when they lend. Most of the money we have was created by banks lending.

This excellent video from Dominic Frisby is a great place to begin:

There was once a time when the literature about money creation was sufficiently off the mainstream to be dismissed. The Bank of England now explains:

I published a short paper on what is wrong with the current system and what to do about it, first inBanking 2020 and then Jesús Huerta de Soto kindly republished it in his journal Procesos De Mercado Vol.X nº2 2013. A further monetary economist privately reviewed the paper but errors and omissions remain my own. You can download it here:

Recent emergency monetary policy has been dominated by Quantitative Easing: the Bank of England has provided a report on The distributional effects of asset purchases (PDF). However, the financial system has been chronically inflationary throughout my lifetime, ever since the Bretton Woods currency system ended.

If QE has distributional effects, why not all money creation?

Here is a historic price index from the Office for National Statistics and House of Commons Library: Consumer Price Inflation since 1750 (PDF). 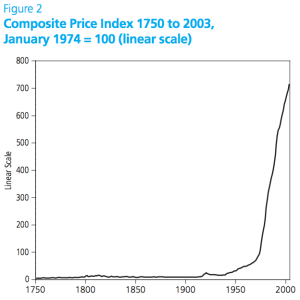 And here is the growth of broad money from 1982 to date via the Bank of England (series LPMAUYM). Note that the money supply stopped accelerating in the course of the crisis, during the period of QE: 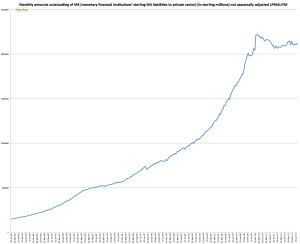 No one can argue prosperity has not increased over the period but if distributional effects matter at all, one must ask “Who benefits?” Via Positive Money, here’s where the new money went:

Why are we in this debt crisis? I have just checked the M4 money supply figures—I am sorry to return to aggregates, but needs must. When Labour came to power the money supply was about £700 billion and it is now about £2.1 trillion, so it has tripled over the past 14 years. Unfortunately, most economists talk about money flowing into the economy as if it were water poured into a tank that found its own level immediately, but what if it is like treacle or honey? What if it builds up in piles when poured into the economy and takes a while to spread out? What if that money was loaned into existence in response to individual choices led by the excessively low interest rates pushed by the central bank? What if it was loaned into existence in particular sectors, such as the housing sector, where prices have more than doubled over the same period, and what if it was the financial sector that received the benefit of that new money first? Would that not explain why financiers and bankers are so much wealthier than everyone else, and why economic activity and wealth has been reorientated towards the south-east?

This debate will explore the effects on society of long-term money creation by private banks’ lending in the context of the present financial system.

4 replies on “Understanding the Money Creation and Society Debate”