Some economists such as Nobel Laureate Paul Krugman hold that during an economic slump it is the duty of the government to run large budget deficits in order to keep the economy going.  On this score given that during 2011 to 2014 the rate of growth of real gross domestic product (GDP) hovered at around 2% many experts are of the view that the budget deficit, which stood at $483 billion in 2014, wasn’t large enough.

According to this way of thinking if overall demand in the economy weakens on account of a weakening in consumer outlays then the government must step in and boost its spending in order to prevent overall demand from declining. Note that government outlays in 2014 stood at $3.5 trillion against $1.788 trillion in 2000 – an increase of 96%. 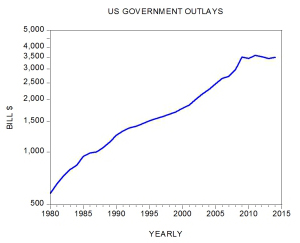 Nobel Laureate in economics Paul Krugman and other commentators are of the view that a widening of the budget deficit in response to larger government outlays can be great news for the economy.

Furthermore, they hold that there is very little empirical evidence that budget deficits are stifling economic growth as such. If anything, they hold it can only benefit an economy once it falls below its average growth path. In contrast the opponents of this view hold that a widening in the budget deficit tends to be monetized and subsequently leads to a higher inflation.

We suggest that the goal of fixing the budget deficit as such, whether to keep it large or trying to eliminate it altogether, could be an erroneous policy. Ultimately what matters for the economy is not the size of the budget deficit but the size of government outlays – the amount of resources that government diverts to its own activities. Note that contrary to Krugman we hold that an increase in government outlays is bad news for the economy.

The government is going to employ all sorts of means to obtain resources from wealth generators to support its activities. Hence what matters here is that government outlays are $3 trillion, and not the deficit of $1 trillion.

Contrary to commentators such as Krugman, the IMF and various Fed officials, we suggest that a cut in government outlays should be seen as great news for wealth generators. It is of course bad news for various artificial forms of life that emerged on the back of increases in government outlays.

By Dr Frank Shostak According to John Maynard Keynes, The ideas of economists and political philosophers, both when they are right and when they are…