Still struggling to move from its ‘Three Overlay’ period – essentially the indigestion added by the post-GFC ‘stimulus’ burst to the already unbalanced economic structure – to its vaunted ‘New Normal’ – slower headline growth but growth of much higher quality, to be concentrated not in building steel mills, metal smelters, and dormitory towns just for the sake of it but on high-tech and clean energy and all sorts of other touchy-feely, Googleworld concepts – China nonetheless managed to eke out a face saving final quarter GDP number of 7.4% yoy and an industrial production uptick to 7.9%.

Taking the data at face value, annualized GDP for the quarter actually did not fare as well, coming in at 6.1% (the worst since QI’12) with IP up 7.5% and overall these numbers – together with those for nominal output – were the weakest in a quarter of a century which has included, one might recall, both 2008-9’s GFC and 1997-8’s Asian Contagion. Within them, the service sector continued to shine – with a nominal increase of 11.1%, a real one of 8.1%, and an increase in electricity consumption of 6.4% – but secondary industry slowed to 5.7% nominal with a price drop of 1.5% ostensibly boosting the real output component to a 7.3% rate which was nevertheless somewhat at odds with the lacklustre 3.7% pick-up in energy use. Primary industry was also sickly, recording scores of 5.4% nominal, 4.1% real, and -0.2% electricity.

As for real estate, let no-one tell you there is not a genuine bust underway. Investment has slowed from 2013’s final quarter gain of 20.1% over 2012’s like period all the way down to QIV-14’s miserly 5.4%. Even that masks the extent of the deceleration, for the last two months of the year were only 5.6% ahead of the preceding equivalent, while the total for December itself was 2.9% lower than Dec’13. The NBS figures from new construction area make grim reading, too, being off 10.7% overall and down 14.4% for the residential sector. As for sales area – a 9.1% drop in RE was not only outmatched by the 13.4% drop in office sales, but the latter also came with an average price drop of 9.2% which made for a precipitous revenue decline of 21.4%.

No wonder the debt default by developers Kasai in Shenzhen is causing both creditors and stock market punters to look askance at the sector. Indeed, given that Reuters is reporting a freeze in new onshore lending to some of Kasai’s peers and that Bloomberg has a story about how yields on some debt in the sector are hitting distressed levels, one might well expect the situation to deteriorate further. This is all the more likely since much of the trouble is bound up with local conformity with President Xi’s ongoing anti-corruption campaign and may well be encountering additional complications from the findings of the as-yet unreleased results of the latest audit of local government financing practices.

None of this had done much to dampen enthusiasm for the stock market – at least not until the powers- that- be decided that the spectacular rise in margin loans had the potential to vitiate the whole thrust of a policy seems to have been aimed at getting people to move their savings from bricks and mortar and into shares, thus not only alleviating the pressure on RE but also promoting a gradual shift away from over-reliance on short-term credit instruments and inculcating a renewed emphasis on the role of within the capital structure.

Nor is at any real wonder the authorities did feel compelled to do something to stop the rise – however welcome in principle – from going ballistic. According to data from the Shanghai Stock Exchange, quoted by the FT, margin debt on just that one board had shot from $71bln equivalent at the end of October to $123bln last week. To put this in context, the NYSE has only managed to add a matching sum of $50bln or more in a similar period twice in its history. No prices for guessing that these records were set right at the peak of the Tech Bubble and again add the very crest of the CDO Supercycle in 2007. For a sense of the scale of what is afoot in China today, also note that the US examples took place in a market whose total capitalization was then around four times that of which the Shanghai Comp can boast today.

Coincident with the three month ban on opening new accounts imposed by the CSRC on Citic, Haitong, and Guotai Junan Securities (handed down to accompany sanctions visited upon nine smaller brokerages) for a range of regulatory infractions which included violations of the stipulation that loans are not supposed to be rolled at the end of their limited term – the bankers’ regulator, the CBRC, made it a double-whammy by issuing a much broader directive prohibiting the use of the widely-abused entrusted loans – a kind of corporate fiduciary credit – for the purposes of financing bonds, futures, derivatives, financial products, equities or other investment vehicles.

Entrusted loans, you may be aware were one of the stand-out components of December’s above-forecast increase in Total Social Financing where they made a sudden jump to a record high of Y455billion which was roughly 135% of the past four years’ norm and which made up approximately twice the usual percentage of the total TSF itself.

Lest anyone think that the rally itself was been frowned upon, however, CSRC spokesman Deng Ge was quick to dispel any such interpretation, saying soothingly that: ‘…Investors’ interpretation that regulators are suppressing the stock market is not accurate.’ Stocks duly obliged by recouping around a quarter of their 9%+ intraday swoon, as did the ChiNext index which soared to a 20 day high, just a couple of percent from mid-December’s all-time peak.

Thus is the eternal dilemma of the central monetary authority: if the real-side is not open to a useful and profitable expansion of activity, the minute some new means of raising the table stakes is offered by the policymakers, the greater the energy becomes which is directed to playing the financial casino instead. 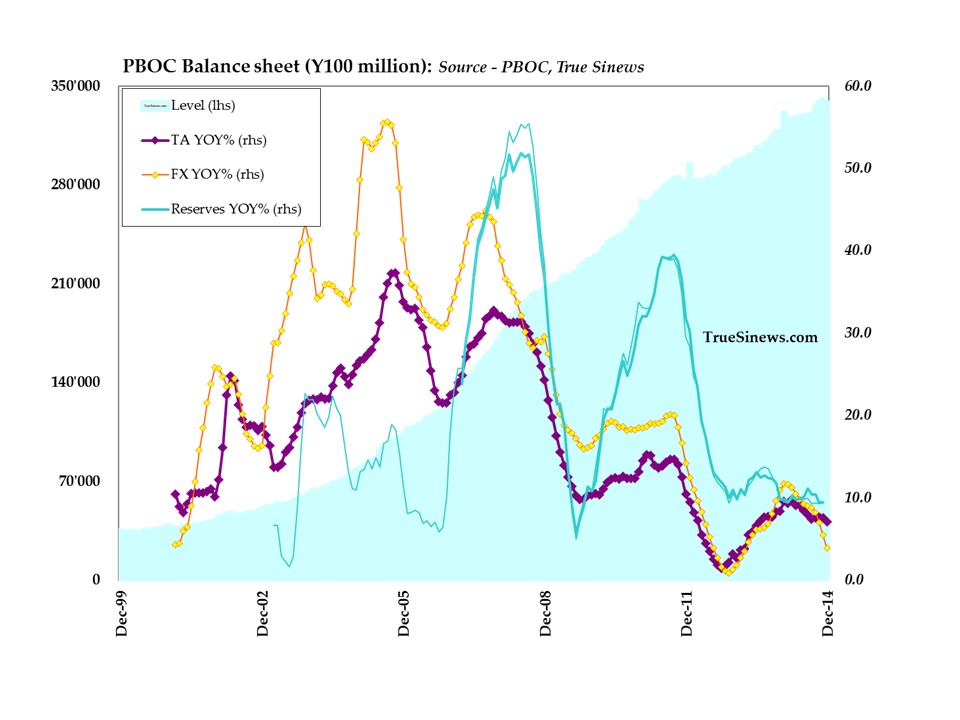 In fact, the PBOC has been relatively blameless in this of late, with its total assets increasing at an 18-month low pace of 7.1% as forex reserve additions dwindled (revaluation effects, capital flight, or the use of IPO proceeds to pay down offshore debt?) and domestic reserve additions of only 8.1% per annum took place – a number which, you might observe, is nigh on indistinguishable from that pertaining to nominal GDP and, like that datum is something only undercut in decidedly less vibrant times (explicitly, in mid-2003 and 2009 when we consider the behaviour of the money supply alone). 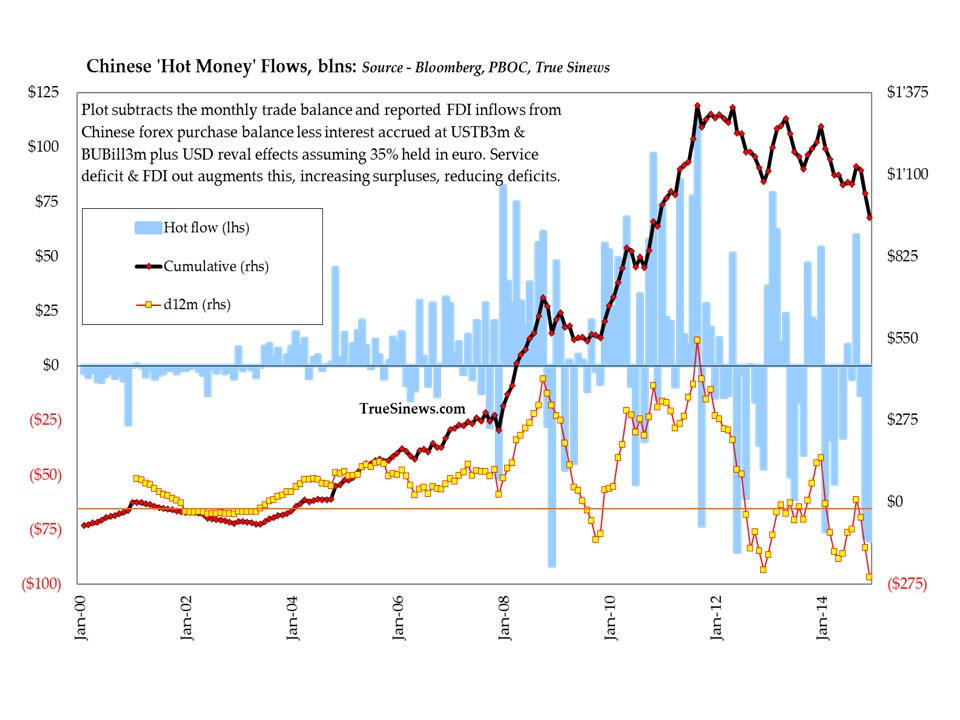 Indeed, it might be worth noting that the rate of monetary increase in once-booming China has fallen to less than half of that obtaining in a supposedly ‘deflationary’ Europe – 3.2% YOY versus 6.9%. Unlike in Europe, moreover, there is none of that necessary re-equilibration between money and credit taking place. 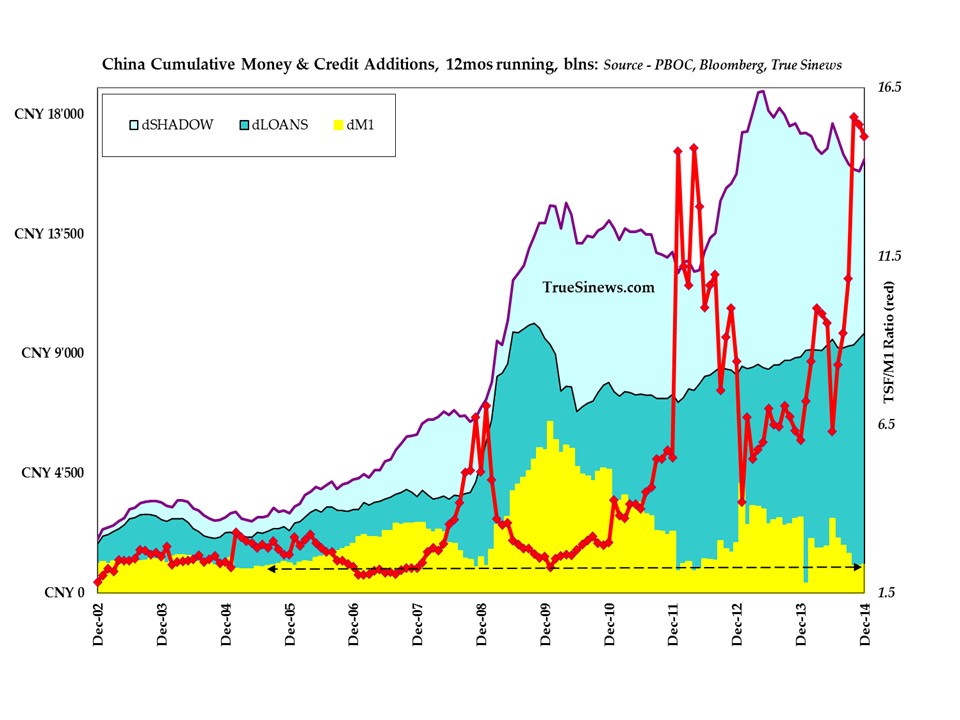 Though the two are not strictly comparable, the annual increment to Chinese M1 is no higher than it was in 2002 when NGDP was only a fifth of its present value and the addition was fully 15-16 times less than the tally of new levels laid out atop the pyramid of credit piled up above it. In Europe, by contrast, M1 growth (allowing for the breaks in the series caused by new entrants to the Zone) was only once briefly higher than it is now – a surge which came in the wake of Lehman’ collapse, of course. 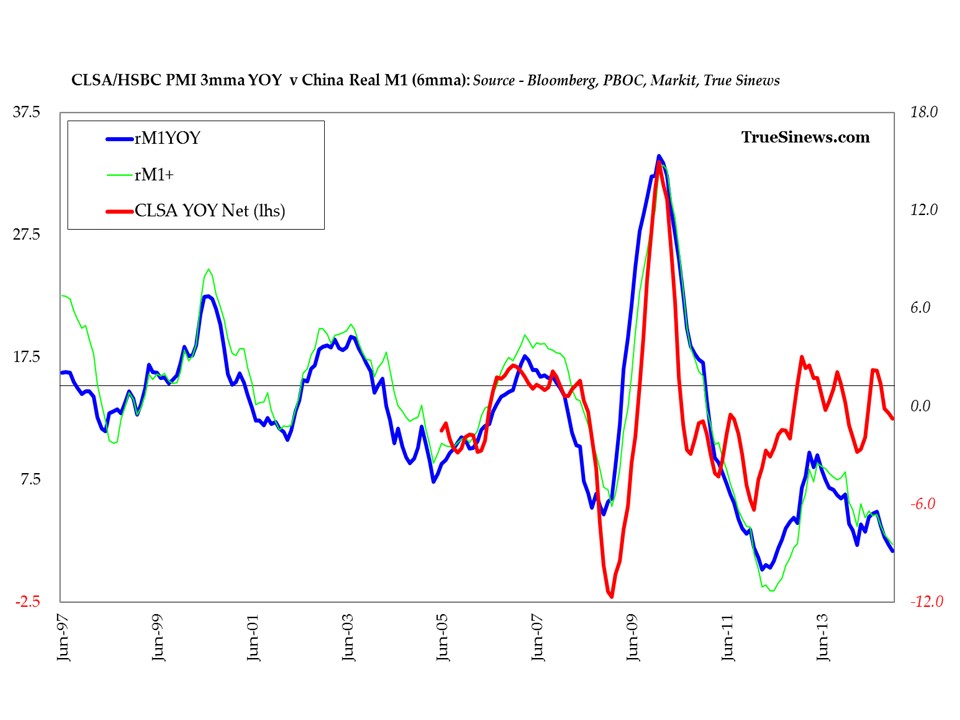 Contrary to the Chinese case, new money per unit of NGDP is thus two-thirds higher than it was in 2002 and, furthermore, the system is becoming ever more liquid, again in contrast to what is happening in China, with the ratio of M1 (the base) to M3 ex-M1 (the pyramid) rising from 72% in 2008 to 133% today.

Regardless of all this, a sagging European economy is no handicap for those wishing to use the unwholesome fruits of easy money by putting them to work boosting asset prices, which are rising without overmuch concern being expressed as to the relation of those latter valuations to the amount of wealth being generated by the entities upon which these represent claims and to which they constitute capital inputs.

For its part, China, however belatedly, seems to have seen the error of its ways and while it will not be immune to the temptations of fine-tuning and top-down meddling as the vice starts to tighten, it has trumpeted its recognition that micro-economic and institutional reform pave the only sure route to a renewed heightening of general well-being. Thus, though progress is currently being made, the road ahead is undoubtedly a rocky one along which there is no guarantee either that the viaduct which spans the deep ravine ahead will not collapse under the weight of the locomotive as it passes or else that the train’s engine drivers will not be frightened into abandoning their course well short of their final goal.

In Europe, alas, the opposite is still very much the case. Only allow the central bank to introduce some new and yet more heavy-handed means of hammering at interest rates, asset prices and currency parities – while the politicians sit idly by, still pampering themselves and their fellow office holders with the proceeds of a threadbare public purse – and all will soon be made right. That is, at least, what most outside the Bundesbank appear to believe. Widely held the supposition may be: if only it were true as well.

Instead, as Premier Li himself admitted, the Chinese economy faces ‘relatively large downside pressure’ in coming months and so, he insisted, it is vitally important to continue the attempt at restructuring. As President Draghi seems unable to admit, it will be just such a restructuring that eventually alleviates Europe’s pain, not his prestidigitations, however crowd-pleasing they may at first appear.

0 replies on “A Slow Boat in China”