Wracked by the actions of the various central banks – which gave us another key reminder that volatility does not equate to risk – yet not wishing to start rethinking their entire thesis, a characteristic loss confidence has started to set in among those who were telling themselves over the Christmas trukey just what geniuses they were. We could have an interesting couple of weeks in store – not helped by the fact that we are about to enter the great Chinese data avoid as the lunar new year approaches.

In China, the poorest industrial profit and revenue results in years, the slowest growth in the money supply, and the not unrelated presure on the yuan – where CNY6.27 looks increasingly important –  are still none of this is enough to halt the flood of hot money into equities. 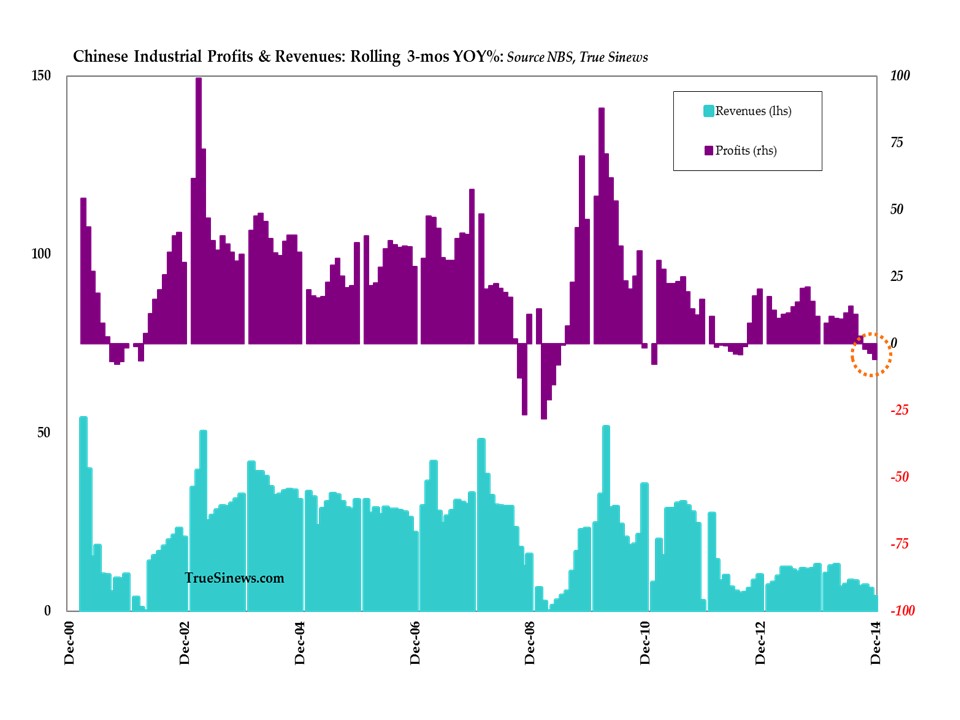 The main boards may have temporarily found a ceiling but the Nasdaq/Neumarkt equivalent, ChiNext, has just threatened to resume the upmove. Sentimentals, remember, can always trump fundamentals. Or, as Frederick Lewis Allen put it a l-o-n-g time ago: ‘Hope can be exchanged for cash on a speculative market.’

As for other stock markets, it appears that something of a tug-of-war has developed. Just enough bad news to keep the bulls from becoming too enthusiastic, but not enough gloom to cede dominance to the bears. Another one of those situations where you have to wait to see who takes control before throwing your weight behind the move. Eg, MSCI World ex-USA:-

And the USA itself. Still some upside if this broad brush picture is going to deliver some wonderfully symmetric culminating action. But…..

…buyer beware: the ‘one-off’ shocks are starting to add up and the resulting rise in uncertainty can be seen in the usual places – vols, junk and EM spreads, the gold/industrial ratio and, arguably, the safe haven dollar trade (or, if you prefer, the end of carry).

Look, too, at how swings in yield differentials between the bellies of the US and German curves tend to signal turning points in the economic cycle.

The T-Bond, too, is pausing for breath after making a minor new historic yield low. While below 2.45/50%, the post-87 profile suggests a bottom at 2.25% (as we have already pointed out), but if things get really hairy, we might have to widen the range and plump for 1.50% for the Bond and 1.10% for the T-Note. RIP all bond vigilantes – a short memorial service will take place, followed by a reading from Homer & Sylla.

As for commodities, the plain gold-in-dollar 2-year profile mapped out since 2013’s collapse looks balanced and, hence, potentially ready for a new trend move away from the mid-mean levels either side of $1300. Behaviour is somewhat harder to read of late for, since the turn of the year, the dynamic has not so much been dollar up, gold down (and v.v.) but euro weakness = gold strength. Such a confusion of signals – and hence of the underlying reasoning – is what we might expect at a turning point but do note that there is now a whole lot of positioning already in place betting on a further rise.

Industrial metals are again staring into the abyss,  as are iron ore, rebar, and coking coal on Shanghai.

Ags, too, are threatening support once more. Not only have harvests been good, but the collapse in crude is neutralising the single most important factor in the sector’s repricing these past ten years – biofuel. Ethanol is at 10-year lows, soy and palm oil are at levels not seen since 2009, sugar was first here all of four decades back and cheap petchems are forcing cotton and rubber lower, too.

Finally, oil itself. We have had almost three weeks of relative calm – itself a newsworthy event given what went on prior to that. But nothing seems able to actually reverse the trend, rather than simply suspend it. Specs are still heavily long, cracks are back to normal, production continues to defy the rig count, inventories are bulging, RSIs are now neutral – and all the while, value is building, not rejecting, right down here at the extremes.

Even allowing for the fact that the dollars you hand over for oil are themselves worth more these days, it is hard to resist the feeling that we will probe lower still before we are done. And some where down there lurks the 1974-2004 mean….

Written By
Sean Corrigan
More from Sean Corrigan
With the halls no longer decked with boughs of holly and the...
Read More