As the title of the blog suggests, we pay close attention to developments in money and credit since the twin precepts of our outlook are that ‘the credit cycle IS the business cycle’ and that ‘silver [i.e., money] is the true sinews of the circulation’.

It is all very well for both macro-economists and stock-pickers to look at flows, but unless a weather eye is kept on how they are being financed and what that implies for the future vulnerabilities of the contracting parties, a very important element is being overlooked.

Indeed, when, in the immediate wake of the collapse, Her Britannic Majesty somewhat querulously asked the foregathered luminaries of the DSGE crowd with whom she was mingling at the LSE, ‘why did nobody see it coming?‘, the one-line answer she might have been given is because none of them have ever cared much to look at the balance sheet, since they are trained to view finance as nothing more than a conduit to be safely neglected in their thickets of unrealistic matrix algebra.

In recent posts, we have dealt with some aspects of the debt issue – that ‘web of contracts’, as Axel Leijonhufvud calls it – which is the deadweight partly responsible for shackling our material aspirations to the ground (the other being the ghastly, taloned hand of the grasping and capricious, interventionist state). So, now, on the eve of the upcoming ECB meeting, let us take a quick look at a few of the monetary developments instead.

As a prelude to this, we should like to point out that, on our twitter account – where the compressed nature of the communications means that a certain sloganeering is not only permissible but almost de rigeur – we have adopted one or two mottos in the attempt to try to bind our monetary text-bites into a more coherent narrative.

One is simply, ‘Abenomics fail’ – shorthand for our disdain for a programme of pretending that an ageing nation of import-reliant savers can get rich by devaluing their currency and by promoting a speculative hunger for equities. Another leitmotif is the‘Ghost of ’37’ – a reference to the widely shared folk mythology that a combination of monetary and fiscal tightening in 1937 prematurely put paid to America’s burgeoning recovery from the earlier slump when in fact the proximate cause was that a new front was opened that year in the New Deal’s regulatory and ideological war on ‘Capital’ – i.e., on entrepreneurship itself.

The fiction persists however that it was an instance of what we might now call ‘austerity’ that did it. As if it alone did not suffice to stay the policy-maker’s hand, this stultifying belief mingles with the perverse incentive that while central bankers might have to endure a mild and momentary criticism of their approach if the ‘controlled’ inflation they so desire ever threatens to go critical, they know that they will be burnt in effigy and their memory forever accursed if they ever have the temerity to try to allow markets to function once again and any noticeable relapse in hot-house growth eventuates as a consequence.

Our most commonly used meme, however, is ‘QEuro = 2 much, 2 late’ – a blunt reference to the fact that Draghi’s long-awaited Whatever initiative has arrived well after any conceivable need for it has passed; indeed, that it has come at a point where the consequences may rapidly be revealed to be almost exclusively counter-productive.

Just look at the GfK readings of Germans’ desire to spend – now at the highest since Dec 2006. Or at the harder confirmation contained in the just-released retail sales numbers  – up 5.3% in real terms yoy – or at the fact that IG Metall managed a 3.4%-plus-benefits wage rise with barely a wave of a red, ‘Wir Streiken’ banner needed. We shall forebear to make overmuch of the fact that the Deauville sale of yearling race-horses also set new records last month.

Yes, French industry may be contracting more sharply again, if we take the latest Markit survey at face value; yes, the Greeks are still trying unsuccessfully to roll that infernal rock up their Hadean hill; yes, Austrian embarrassment is intense as that captive funding arm of local political corruption – Hypo Alpe – is again making the wrong sort of headlines. But money – ever more copiously provisioned money – is beginning to burn a hole in the pockets of more than just stock market plungers and would-be real estate moguls.

A look at the graph of European monetary trends shows us why. 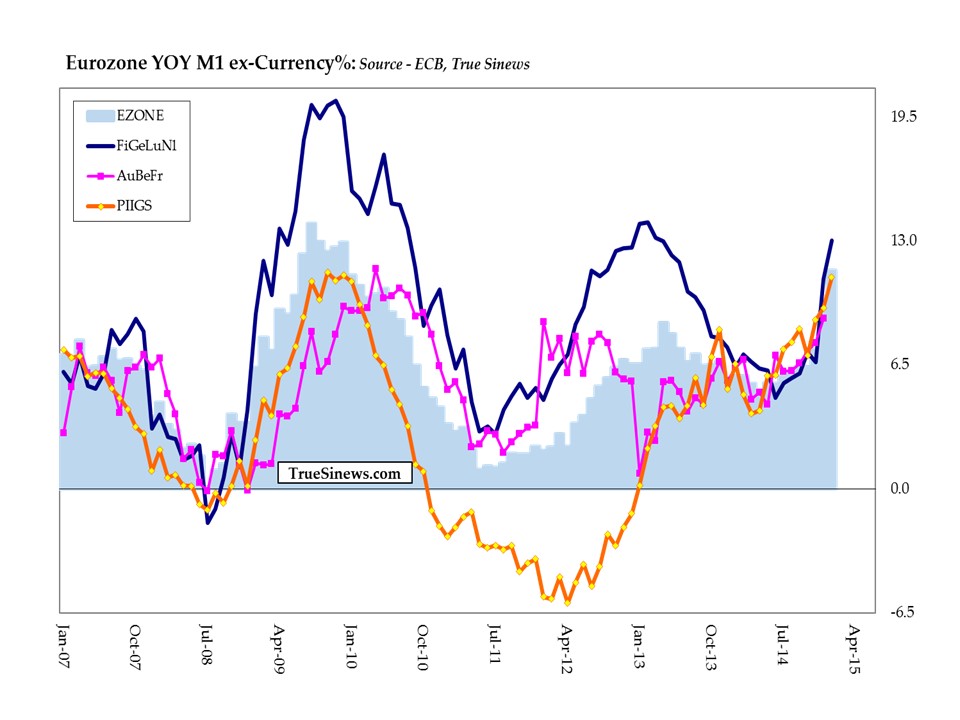 Not exactly a dearth of the folding stuff, is there, neither among the T2 creditors, the middle ranking countries, nor the sinful PIIS (Greece, for obvious reasons we exclude from the roll of shame, just now)?

Moreover, if we focus on changes in the balance sheets of the residents of the latter four problem children – specifically with regard to their deposits at and loans from the region’s banks – we arrive at the remarkable observation that, for the whole of the last 2 1/2 years, the non-financial private sector has improved its net position by just over €1 billion per working day for a €750 billion total – with two-fifths of that betterment coming from a household sector biased toward deposit acquisition and the remaining three-fifths resulting from corporates’ efforts at reducing debt levels. 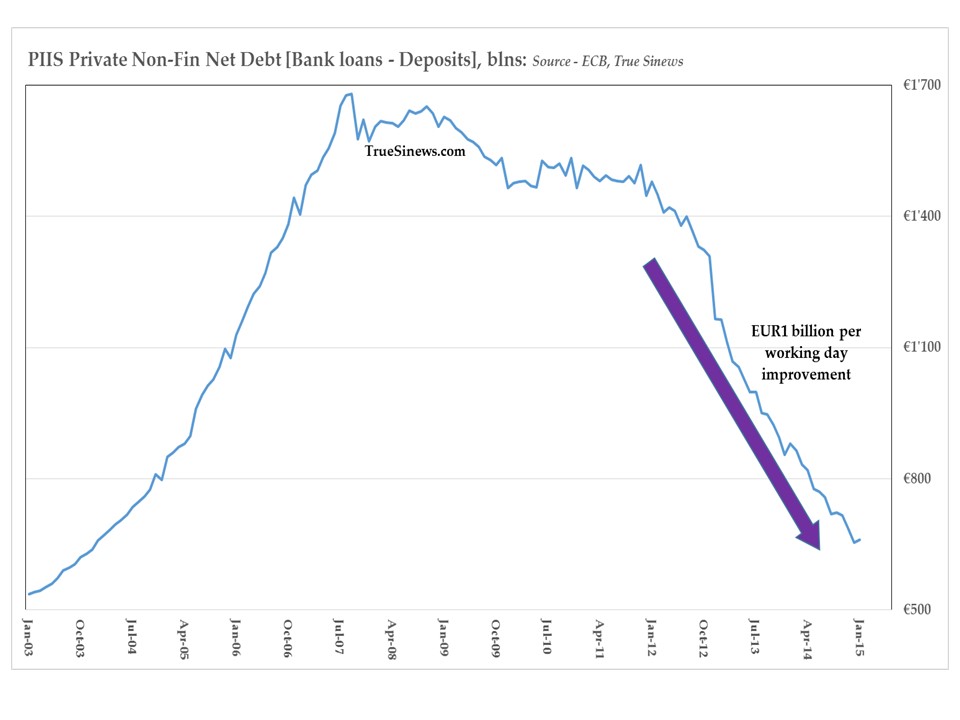 Indeed, corporate liquidity has not been this favourable since early 2006 while households are enjoying the biggest surplus to be found in our sample. As a pairing, the private sector is back where it was eleven years ago, having worked off the entire €1 trillion cumulative deficit it disastrously ran up between the end of 2003 and the latter part of 2007. 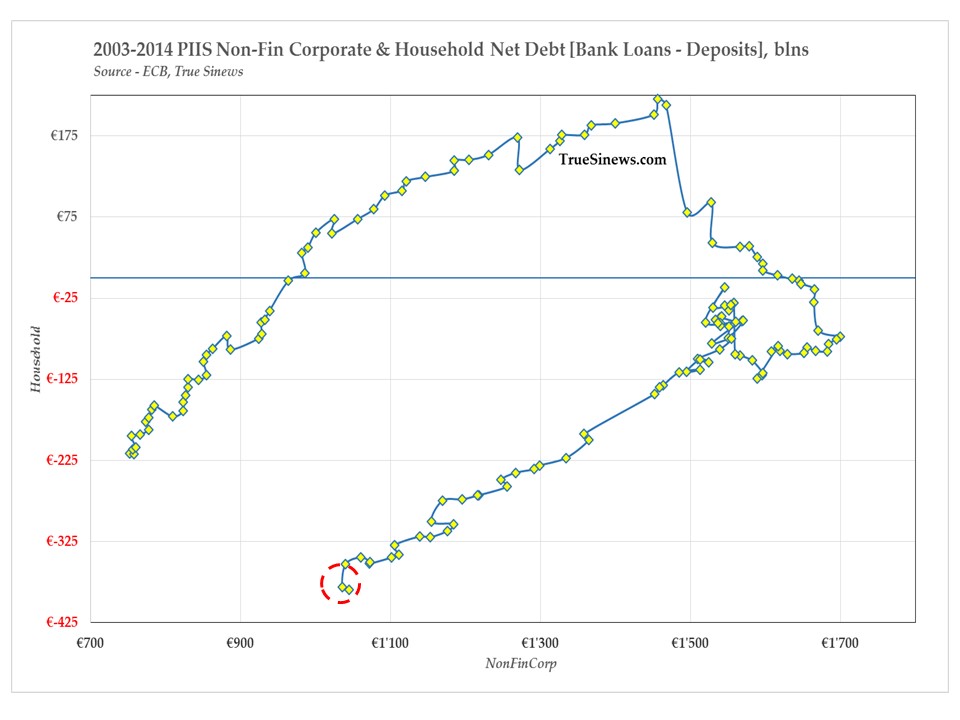 Malign consequences elsewhere are already becoming evident. For example, S&P has calculated that the actuarial shortfall in defined benefit pension plans worsened by anything up to €90 billion last year (widening an already substantial gap by a quarter in one bound). The agency went on to point out – rather superfluously, one might think – that things will only deteriorate again this year.

Insurers also face a squeeze between their long-term liabilities – many of which carry minimum pay-out clauses well above today’s nugatory bond yields – and the medium-duration assets they hold and roll in order to meet these. Despite the plaintive acknowledgement of their likely future difficulty – and who better to compute long-term probabilities than members of an actuarial industry? – they are all presently hiking dividends and raising pay-out ratios in order to disburse some of last year’s one-shot gains on equities and on the MTM value of their bonds in a crass attempt at trying to massage their share prices upwards!

It is supposed to be rapid rises in the price of goods which promotes such economic short-termism and which encouragesunwitting capital consumption, but here we see asset-price inflation inducing those who really should know better into aconscious dissipation of their substance.

Other harmful side effects are that despite what Nick Nelson of UBS told Reuters were “47 months uninterrupted of earnings downgrades,” and with nary a care that Q-IV revenues were down 6% yoy, record amounts of money are flowing into European equities. Presumably most of the foreign component is arriving with the currency exposure well-hedged in that same Gutenberg Trade manner by which the world and his wife went long Nikkei/short yen when the BOJ got the printing press humming back in 2013/14.

A glance at the following two charts (courtesy of Nikko Asset Management) might give some pause for thought, however, even as the markets ratchet ever upward. The first shows the eternal over-optimism with which the all-important earnings estimates for Europe are routinely framed at the beginning of every season and how they are doomed to dwindle inexorably as each successive year rolls on:

The second shows whence investor returns to date have been derived as a consequence of this (Answer: not through the agency of anything tangible):-

As the team at Nikko dryly conclude their examination of this trend:-

‘…there are several credible reasons to expect that QE will boost corporate earnings in Europe, though by not as much as in the US. However, the risk of disappointment relative to inflated expectations remains high.‘

And finally, of course, there is property – always the first and last outlet for the Middling Sort but, as ever, too, an unproductive, Ponzi-prone use of funds which is fraught with long term danger on that same account. Even in Hollande’s benighted France, SCPIs – a kind of local REIT – saw a 10% rise in inflows to set a new record last year, while BNP Paribas reported that foreign buying ‘drove European hotel investment’ to the extent that France, Germany, Italy, Spain and the UK attracted two-thirds more cash than the year before and so topped 2007’s pre-crash record.

Would you like some more? Well, German ratings agency FERI reported that institutions it surveyed there were intending ‘strong’ increases in allocations to residential and retail RE together with a widely expressed appetite for higher-risk and indirect investment vehicles. Property giants CBRE, for their part, noted that 2014 saw €218 bln ploughed into Europe with the final quarter’s €78 billion just failing to top 2006’s bubble highs. Sweden, Spain, and Ireland did, indeed, set new records, we are told, while Portugal and Holland were also notaly strong. Any prizes for guessing what might happen this year with bond yields negligible or even negative in most of these countries?

Given all the foregoing, one final Twitter tagline of ours is of relevance, viz., ‘CBs, 2 save the Few, ruin the Many’

Sadly, this is not likely to turn out to be much of an exaggeration. Sadly, too, Snr Draghi is unlikely to pay the slightest attention to our worries when he convenes his cabal for the scheduled away-day meeting in Cyprus this week.

Written By
Sean Corrigan
More from Sean Corrigan
Having already touched upon the UK’s shaky fiscal position, all that really...
Read More