After yet another masterly performance before Congress – one which was immediately confounded by the usual cacophony of cross-talk from the Pigeons and Doves (no Hawks!) among her colleagues – Madame Yellen has left no-one really the wiser as to what the all-things-to-all-men Federal Reserve thinks it is actually doing with regard to monetary policy.

Is she ‘patient’ or not? And is ‘patient’ a nudge-nudge, wink-wink code for a period stretching beyond the next few FOMC meetings or is it just a tacit admission that the Fed will start checking its parachute harness only after the plane’s engines have at last caught fire?

Given all this prevarication, have you lost patience with the whole weary rigmarole, as have we, Dear Reader? If so, can we suggest you join us in setting aside your frustrations by concentrating on the one abiding truth of current policy: that even if theredoes exist a door marked ‘EXIT’ in the haunted house in which the world’s central bankers have long confined themselves, it would be one guarded by that most fearsome of all the ghastly bogeymen of economic myth – the Ghost of ’37.

But why not, you ask? Is the Fed not right to hold fire in this world of ‘secular stagnation’ Is it not only prudent to avoid tipping the country headlong into ‘deflation’ by spooking the financial markets and so risking a full-scale reprise of the Lehman moment of six years ago?

Perhaps not. For even as has been belatedly recognised by the ‘professional second-hand dealers in ideas’ who write, for example, for the FT – when not flitting to Davos or popping up to sing for their supper at self-flattering symposia sponsored by billionaire financial St. Augustins (‘O Lord, help me eradicate all inequality, but just not by setting a personal example’) – what the world urgently needs is not any further incentive to take on debt. but a means of expunging some of its gross, existing burden of the stuff.

Yes, without any acknowledgement of the error of their ways and lacking any display of contrition at the long misery to which their pontifications have greatly contributed, the Clerisy are starting to realise that they may as well help Atlas to shrug off his crushing load and that the world must thereafter be ordered to allow the newly liberated Titan to enjoy as much freedom as possible (‘structural’ reforms must be enacted, as they put it) if he is to help rebuild both his and our prosperity.

It is almost mischievous to say so but, in the circumstances, a genuine bout of deflation could actually represent a useful Plan B. After all, few can argue that the authorities’ Plan A has so far been a rather dismal failure; that the Powers-that-Be have not managed to alleviate the real impact of all that debt as they had planned, in an inflation of anything other than the price of prestige property, race-horse yearlings, modernist daubings, and all manner of financial assets. To their mounting frustration, their efforts so far have achieved little more than to ignite a version of inflation which has served only to aggravate the divide between the rest of us poor saps and the same plutocratic 1% which is so vilified by the very bleeding heart Progressives who are to be found at the forefront of the mob noisily advocating the current policy mix.

Without wishing to call the glib ‘liquidationist’ slur down upon our heads, one might point out that the one guaranteed way to cancel debt is to allow a sufficiently rapid deflation that creditors can no longer hold out for the soothing money-illusion balm of a repayment in debased coin but must instead face up to the reality that their debtors are unable to comply with the terms of their mutual contract as originally drawn up.

If you agree with a man that you will feed him and his co-workers for a month in exchange for them delivering a tonne of coal to you at the end of the period and he later finds he and his team cannot possibly comply with his undertaking, it serves no very great purpose to redefine the mass which makes up a tonne to half its former value in place of either accepting the reduced physical repayment your debtor can make for what it is, or of otherwise working out some alternative scheme of mutually-agreed recompense which will at least allow him and his mates the chance to continue to make a living – an activity from which you might yet hope to derive some ancillary benefits.

Inflation is not, therefore, a panacea, especially when the principal means of injecting the posion into the economic circulation is by encouraging people to continue to borrow more than they should.

Deflation in this sense is, of course, unmitigatedly ugly but it is at least a purgative. The soothing inflationary alternative nurtures a more chronic disease in place of that febrile crisis, but this is an illness whose mortality rate may well turn out to be higher, not lower, than its more acute cousin. Arguably, too, it is one which introduces even more inequity into the system for while neither the struggling debtor, nor the prudent, middling sort see any benefit from the asset-heavy, differentiated increase in prices, the members of  the speculative class make out like the state-sponsored bandits they are.

QE may thus prove to be little more in form than an issue of letters of marque to our era’s financial privateers on a truly unimaginable scale. Every new higher close on the stock market and every notch lower in bond yields and credit spreads should therefore be added to the charge sheet of financial larceny, even if the move does not end up inducing a panicky rush for the wheelbarrows.

But, in any case, what do we mean by ‘deflation’? In truth this should imply an increased perception that money has become more scarce, whether because the quantity available has actually shrunk or because money – final-settlement, trust-no-man money – is being demanded in place of the Good-time Charlie credit which was formerly allowed to assume some of its functions. 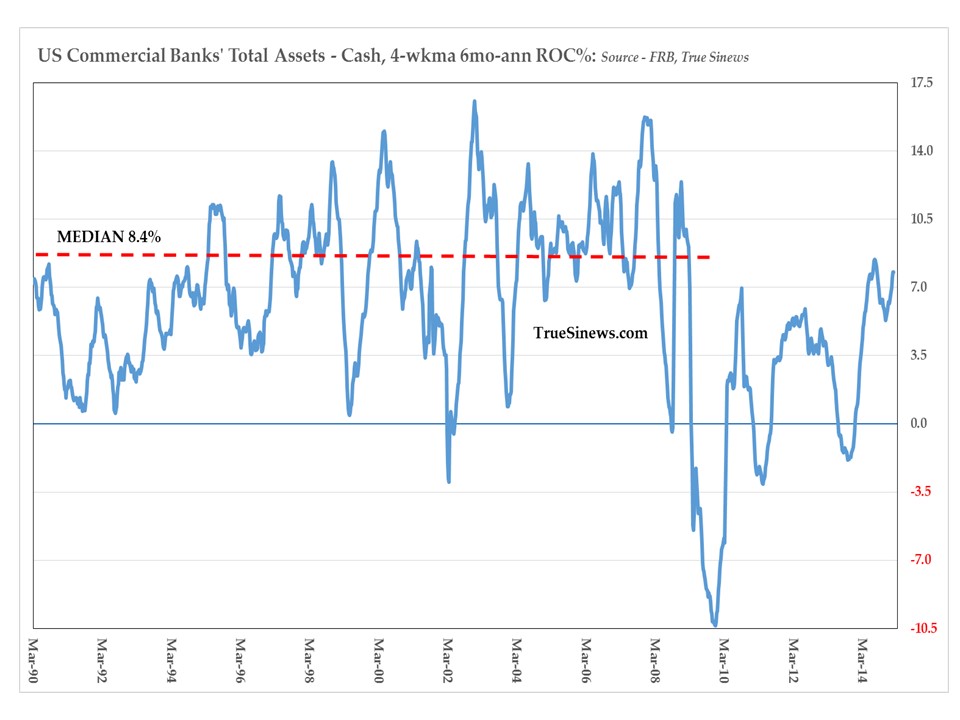 On that score, we can hardly talk of the United States being at risk of ‘deflation’. To consult but two of the more timely gauges of the financial temper of the times, commerical bank balance sheets – minus the hoard of excess reserves they have been forced to pile up at the Fed – are again growing smartly, rising by 7.8% YOY, close to the best in five years and not too far removed from the 8.4% median of the two decades preceding the collapse of Lehman. Money proper is also not in short supply, rising 10.4% nominal, 8.1% real in the past twelve months and so moving far, far above the long-term trend. 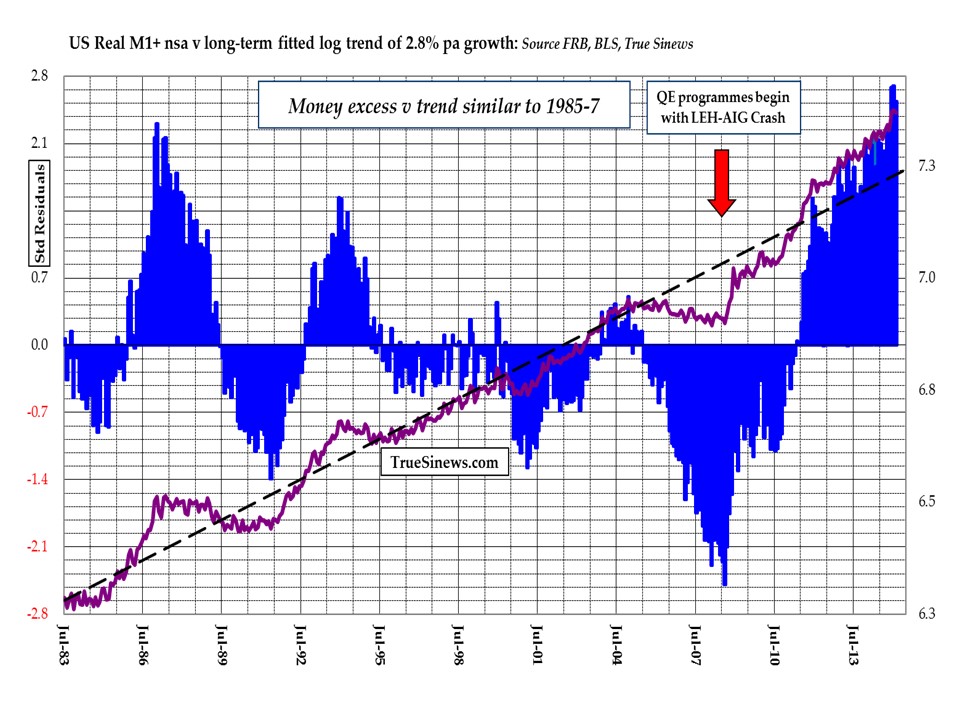 Even if we do succumb to the dubious practice of defining deflation by means of a simple fall in what we imagine to be the general price level, it is not at all clear that any ‘threat’ to any but the most confirmed sufferer of katatimophobia exists either at present.

Take the Cleveland Fed’ s Median CPI index, for example, an index whose primary virtue is that it throws out the outliers, high and low, and so is less affected by either positive or negative ‘shocks’ to small numbers of its constituents.

As it has for some little while now, this is giving a thoroughly, unexceptional, if not impressively stable reading: one which, moreover, manages to meet that cabbalistic ideal of modern central bankerhood of a rise of close to 2% per annum – at which sacred pace, we are constantly assured, the doors to earthly paradise will instantly be thrown open. 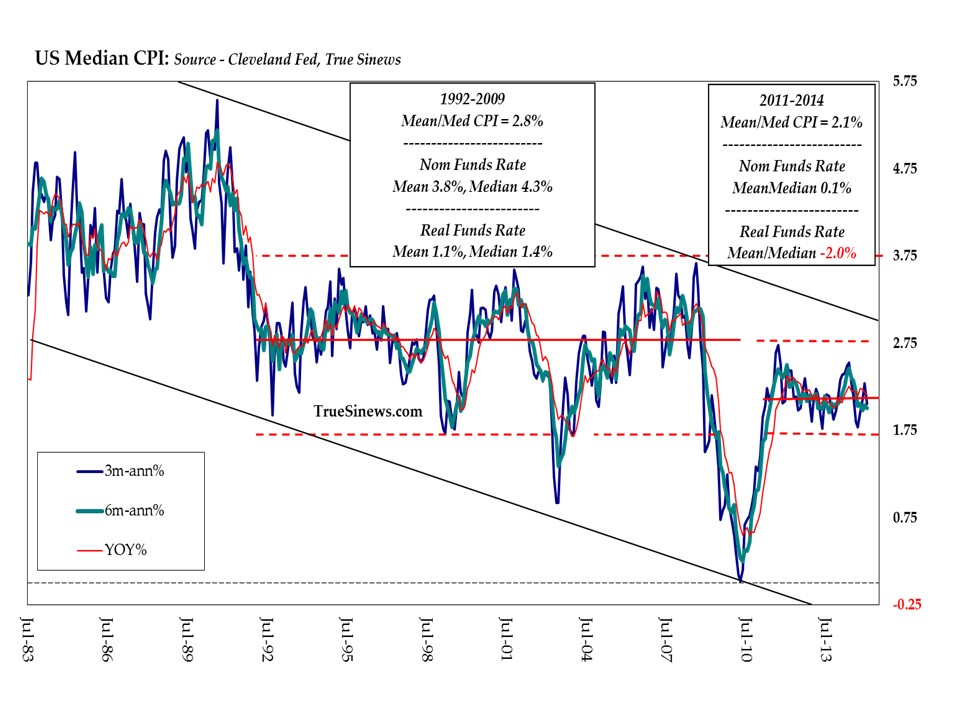 And lest this observation give rise to the opposite argument that if the maintenance of this Babylonianly perfect rate requires no countermeasures on the downside, it need call forth no monetary tightening either, just be aware that, as for much of the past four years, this leaves the real Fed Funds rate at highly unsettling 2%-negative. For comparison, the seventeen years of the so-called ‘Great Moderation’ between 1992 and 2008 saw a typical CPI rate not much more elevated than at present – at 2.7% – but also experienced a nominal funds rate of around 4% and an ex-post real one of plus-1.2%.

Given that, with the benefit of hindsight, this supposed golden era was the one in which were actively sowing the seeds of our own ruin, it might give pause for thought about quite how much harm our masters ‘ stubbornly accommodative stance is causing us again today.

Written By
Sean Corrigan
More from Sean Corrigan
Several months ago, when we were trying to summarise our best guess...
Read More