Ben Bernanke presided over the Federal Reserve for two terms, from 2006 through 2014. A year and half into his first term, he began driving the Federal Funds Rate down. By the end of his frantic interest episode, this key overnight lending benchmark had been crushed. It hit bottom, and it hasn’t sprung back in over 6 years since.

Everyone is harmed by zero interest policy. Who suffers the most is open to debate, but one obvious candidate is the retiree who lives on a fixed income. These are people who worked and saved their whole lives, and now they depend on interest to buy groceries and heat their homes. For them, zero interest is like breathing air without oxygen. They suffer a slow death by suffocation.

In writing about this class of people, economist John Maynard Keynes used a term he intended to be pejorative—the rentier. In Keynes’ view, those who invest capital to earn a yield are parasites. In The General Theory of Employment, Interest, and Money, he asserted that the rentier is a “functionless investor” (i.e. gets paid for doing nothing). Keynes called for “the euthanasia of the rentier” by government suppression of the interest rate.

Recently, former Federal Reserve Chairman Ben Bernanke has begun blogging at the Brookings Institution. He wrote that legislators said he was “throwing seniors under the bus.” He reassures us that he “was concerned about those seniors as well.”

That is a neat little example of context-switching. These unnamed legislators did not ask Chairman Bernanke how he felt as he was throwing senior citizens under the bus. His feelings are not the issue. The issue is whether zero interest does, in fact, throw seniors and other rentiers under the bus. Bernanke can’t deny that, and he doesn’t try.

Instead, he offers this, “But if the goal was for retirees to enjoy sustainably higher real returns, then the Fed’s raising interest rates prematurely would have been exactly the wrong thing to do.” Got that? We have to keep interest low, so seniors can earn more interest.

This is indeed the whole point of irredeemable paper money and central banking. The decision to extend credit, and at what interest rate, has been taken away from the people. The saver is totally disenfranchised. The power to set rates has been concentrated, and placed into the hands of the committee who runs the central bank. It’s just how irredeemable paper money works.

We free marketers should always keep something in mind. The regime of the dollar centrally planned. Although then planners deserve criticism, we should not focus on them. We should take care not to imply that any other planner would do better.

There is no such thing as a good central planner. There are only central planners that destroy capital less quickly and those who destroy more quickly. Sometimes, people may think that a Fed chairman is not so harmful during his tenure, only to realize the full extent of the destruction later (for example, Alan Greenspan).

Bernanke thinks he is defending himself, when he makes his most damning statement. “A premature increase in interest rates engineered by the Fed would therefore have likely led after a short time to an economic slowdown and, consequently, lower returns on capital investments. The slowing economy in turn would have forced the Fed to capitulate and reduce market interest rates again. This is hardly a hypothetical scenario: In recent years, several major central banks have prematurely raised interest rates, only to be forced by a worsening economy to backpedal and retract the increases.”

So interest rates have to go down when the economy is weakening. Consider the interest rate trend since 1981. 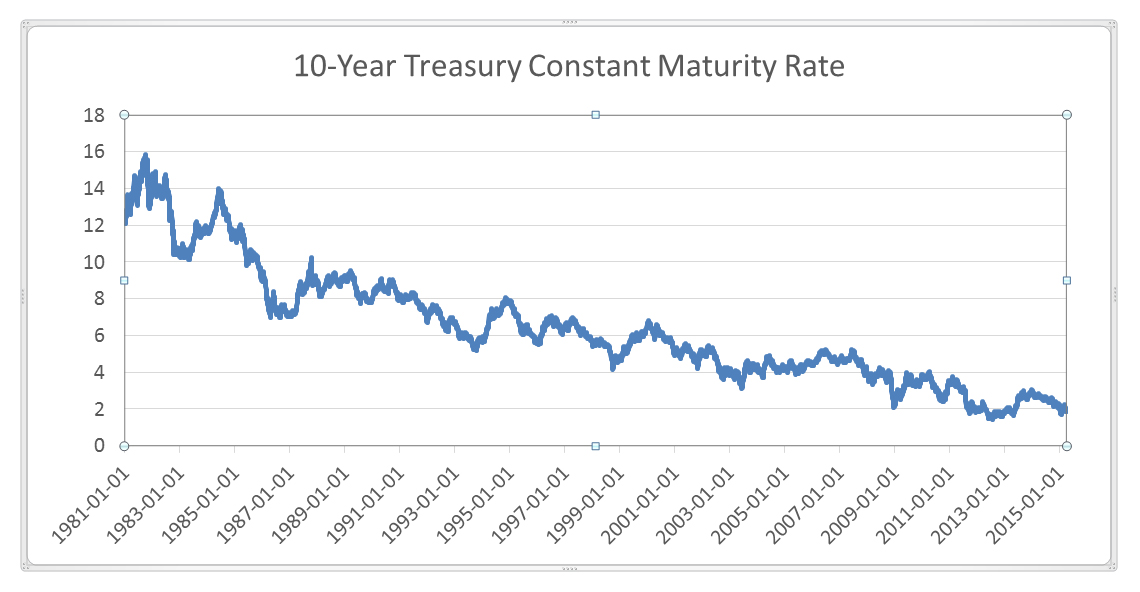 (Courtesy of the Federal Reserve Bank of St. Louis)

Why has the rate been falling for over three decades? Why has the economy been weakening for 34 years? It’s even worse in Japan and Germany, and even worse than that in Switzerland (which sports a negative rate on the 10-year bond).

Bernanke and his colleagues did not see the crisis of 2008 coming, even as they centrally plowed the world into it. Despite his crocodile tears, savers all have bus tire tracks on their backs. When I was in grade school, kids could work a paper route, and with compounded interest, pay for a college degree. No longer. Workers can set aside 10% of their salaries, if they wish, yet they have no hope that it will ever support retirement. Seniors are forced to spend their capital, fearing to outlive their money.

This is the central banking endgame. Have you ever seen one of those humorous signs that says “The beatings will continue until morale improves?” Similarly, the interest rate will keep falling until the economy improves. The Bernanke’s of the world will never find an opportunity to raise rates.

If we don’t change the regime, rates will continue to fall into the black hole of zero—and negative, as in Switzerland and Germany.

Instead of giving us an apologia, Ben Bernanke has a unique opportunity to show the world that central banking has weakened the global economy. Central banking cannot plan us out of the quagmire it has planned us into. Bernanke could give a clear statement, and explain that for all of his intelligence and education, it availed him not. The irredeemable dollar cannot be fixed.

What he should say is that it is now time for the world to consider a four-letter word that has been all but banished for decades. Gold.