I am sometimes asked what investors should look for if they are thinking of investing in a cryptocurrency. My initial reaction is that I wouldn’t: these things are very risky. In any case, what the heck would I know? I only teach this investment stuff, and my own investment performance is dismal.

But then I got to thinking: what are the key stages of due diligence as they apply to a potential investment in a cryptocurrency?

Warning: I have absolutely no qualifications to give any financial advice and under U.K. law I am not allowed to do so. So you have been warned …

Anyway, FWIW, my advice is as follows:

My starting point is the venerable principle ex nihilo nihil fit: nothing comes from nothing. Any cryptocurrency involves an attempt to create a currency – that is, a currency with positive exchange value for real goods and services – from, essentially, nothing. But if it is that easy to create ‘owt from nowt’, as they say in my native Yorkshire, then everyone would be doing it and most of them will soon fail. Indeed, this is exactly what we see happening in the cryptocurrency space.

So the first question is why should we believe that any particular cryptocurrency is going to be an exception to this general rule?

There is a related question: how do we know that the cryptocurrency you are thinking about is not some ‘pump and dump’ scam in which the currency is talked up on the social media by enthusiastic supporters and then dumped on the market to unwitting victims who bought it up at inflated prices? After all, we have seen a few of those already. In fact, many of the alt cryptos are little different from the penny stocks in Leo Di Caprio’s, “Wolf of Wall Street”.  Crap, basically.

But I digress. The short answer is that we usually don’t.

Having satisfied yourself on these points, you then go through the following checklist to eliminate the more obvious duds:

If you feel that the proposed investment meets all these criteria, then it is worth considering further; otherwise, you’d best cross it off your list.

This checklist is easier to explain if we have an example to walk through. Let’s take LEOcoin, a new(ish) cryptocurrency that had its U.K. launch in London last month. I shall take this as an example but I shall refrain from drawing any conclusions of my own and leave that task to the reader: after all, the first rule of due diligence is that you have to do it yourself.

LEOcoin is a brand new digital currency … [s]upported by a large community of established and aspiring entrepreneurs.

LEOcoin is a big idea. It is designed to be a world currency and the currency of choice for entrepreneurs. We combine development skills, International infra-structure, real world entrepreneurial know how, a Global network and user base, and a Global vision in our DNA, creating a platform for growth second to none.[1]

Another one of their pamphlets elaborates further:

Bitcoin was the prototype LEOcoin is the future …

LEOcoin is a Big Idea. It is conceived to be a World Currency and the currency and payment method of choice for entre­preneurs. The crown represents the aspiration that this will be a future King of currencies. The crown has three spikes reminding us of the three main values of LEOcoin:

The lion is a global symbol recognised in all cultures as a symbol of strength, integrity and leadership. All of us are fa­miliar with lion statues guarding the entrance to buildings, its use as a heraldic symbol, and its associations with sover­eignty and royalty. All of these associations and meanings are appropriate for LEOcoin.[2]

The Shield represents the idea that the Lion fights for the rights of the LEOcoin community, for their interests and stands staunch against any threat.

So you rate this on the substance vs. BS scale and then turn to specifics and USP: I found out that LEOcoin is some kind of extension to an outfit called LEO, which describes itself as a community with 100k+ members worldwide. LEO has been operating since 2012 and offers training resources to would-be entrepreneurs.

LEOcoin itself was conceived in May last year and launched in July, and I was impressed by this remarkably short lead-time: it usually takes me ages to work out my big ideas. LEOcoin claims to be 100% anonymous, unlike other cryptocurrencies, which are only partially anonymous – I confess that I am not sure how it manages to achieve perfect anonymity when the others don’t but let’s move on – and very user friendly with low fees, ease of use, etc. It also claims to have state of the art security and have a mining or transaction block validation process that is some combination of Proof of Work and Proof of Stake, with the latter helping to make it more energy efficient than, say, Bitcoin. It also offers strong inducements to get your family and friends involved so they can share the benefits.

What about endorsements? Well, one thing is for sure: LEOcoin has friends in high places – no less than the U. K.’s Deputy Prime Minister, the Rt. Hon. Nick Clegg. On January 28th, its founders Dan Anderson – though he sometimes spells his surname Andersson – and Atif Kamran met him and several other ministers at the Cabinet War Rooms. Here is a nice picture of them taken from the LEOcoin website: 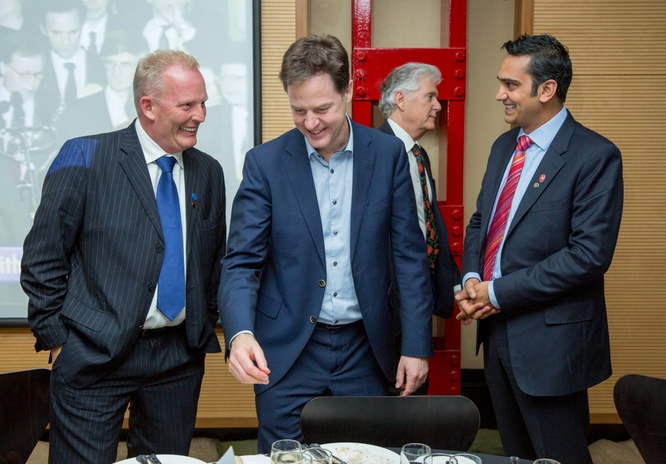 LEOcoin is a British innovation and has the potential to fundamentally change the way the world thinks about currencies. I had an excellent discussion with the Deputy Prime Minister, Nick Clegg, exchanging views on how the UK and other financial centres across the world would benefit from the burgeoning interest in cryptocurrencies like LEOcoin. The Deputy Prime Minister was very interested to hear about the launch of LEOxChange and said that he would keep a close eye on the City’s reaction.[3]

I then started to look further into founders of LEOcoin and boy did I get a surprise! It turns out that they have an interesting history and are well-known on the web. A sample of links is given below:

The gist of these and other sites is to accuse Anders(s)on and Kamran of having masterminded global Ponzi schemes with large numbers of victims in China, Bangladesh, Pakistan, Slovenia and other countries. Oh my!

Of course, we should not jump to conclusions: it is entirely possible that these are just malicious allegations against perfectly decent businessmen – one has to keep an open mind – but one does wonder why so many allegations are being made.

Of particular note – because of the reputable sources, which cannot be dismissed as malicious internet gossip – are allegations against Mr. Kamran regarding his activities in Pakistan. A preliminary investigation led the Securities and Exchange Commission of Pakistan in 2011 to issue a public warning that Unaico was an illegal Ponzi scheme:

This warning was followed by reports that the Pakistani National Accountability Bureau had closed Unaico down following a criminal investigation and that Mr. Kamran was now on the run and had been placed on the Pakistani Exit Control List prohibiting him from leaving the country:

In fairness, I should add that both individuals are aware of these allegations and have issued rebuttals:

So Mr. Anders(s)on acknowledged that he is the former President of SideTalk/Unaico but denies any wrongdoing and points out in his defence that he had “led numerous fortune 500 companies” – and a claim like that is presumably easy enough to verify although I haven’t been able to verify it myself.

Then there is Mr. Kamran:

To quote from his site:

Many rumors even claim that Atif Kamran is on the run from the law in Pakistan because of the Atif Kamran scam with Sitetalk, but if people take a minute to think about it, they will realise that it is just a rumour and nothing more. Atif has recently launched a new business venture called LEO. He co-owns this company with Dan Andersson, and the global headquarters is located in the U.K. If he were really on the run from the police, then England would be the wrong place to do it as he could easily be found there!

The fact of the matter is that Atif Kamran is not a scammer in any way, shape, or form. He is a reputable multi-level-marketing expert that owned a company that went bust. Millions of companies do not succeed when they begin start-up businesses, but that doesn’t make them or the people that own them scammers. It simply means that they tried hard and failed just like others who have the dream of owning their own company. There is no proof that the Atif Kamran scam is true, and Atif’s new company LEO is proof that he is a good businessman that is trusted by millions of people around the world.

In short, Mr. Kamran says he is innocent and in his defence, he openly makes himself available to law enforcement if they (or their colleagues overseas) have any questions. In fact, the only thing he omitted to provide is an address at which they could contact him.

So there you have it: two very divided sets of opinions. On the one hand, those saying that Anders(s)son and Kamran are scam artists, criminals even; on the other, their defenders, who strenuously deny any wrongdoing but concede that some of the earlier ventures that they led were failures.

And what do I think? What I think is that we can all agree that LEOcoin could be said to offer one of the more interesting investment opportunities available in the cryptocurrency space.

0 replies on “Wanna Invest in a Cryptocurrency? How about LEOcoin?”