Financial markets in the United States and around the world are all waiting with “bated breath” for when the Federal Reserve modifies its “easy money” policy and starts to raise interest rates. No one, however, asks a simple question: Why is the American central bank in the interest rate setting business?

In May 20th, the minutes were released of the April 2015 meeting of the Open Market Committee (OMC) of the Federal Reserve. The Open Market Committee decides when and by how much America’s central bank should intervene into the financial markets to influence the amount of money and credit in the banking system and, therefore, over time, in the U.S. economy as a whole.

The members, it seems, were still divided as to whether or not the OMC should start nudging interest rates up through monetary policy, or keep them at the low levels they have been at for years, with a majority leaning to not doing so until maybe September.

In its usual ambiguous language, the published summary of the OMC meeting stated that, “Many participants . . . thought it unlikely that the data available in June would provide sufficient confirmation that the conditions for raising the target range for the federal funds rate had been satisfied, although they generally did not rule out this possibility.”

The next day, Friday, May 21st, Federal Reserve Chairwoman, Janet Yellen, spoke before the Greater Providence Chamber of Commerce in Rhode Island and said she, “Thinks it will be appropriate at some point this year to take the initial step to raise the federal-funds rate target and begin the process of normalizing monetary policy.”

But she added that, “The Fed’s objectives of maximum employment and price stability would best be achieved by proceeding cautiously.”

How the Fed Creates Money and Influences Interest Rates

A key Federal Reserve policy instrument or “tool” is, as Yellen stated, the Federal Funds rate. This is the rate of interest that banks charge each other for overnight or short-term borrowing.

Every bank is required under Federal Reserve rules to maintain a certain amount of cash reserves against its outstanding depositor liabilities. On a daily basis, sums of money deposits flow in and money withdrawals flow out of every bank and financial institution. Sometimes banks find that the withdrawals have exceeded deposits into their vaults, and they are threatened with temporarily falling below that required minimum of cash reserves. At other times, the reverse may be the case, and deposits have exceeded withdrawals resulting in “excess reserves,” that is, those above the minimum required.

Banks borrow and lend funds between each other to cover and smooth out these temporary fluctuations in their deposit and withdrawal flows of cash, and a rate of interest emerges on the market reflecting the availability or “tightness” of such excess funds for some banks to lend to others running a bit short, short-term.

The Federal Reserve can influence this Federal Funds interest rate by purchasing or selling U.S. government securities. The Federal Reserve is prohibited by law from directly lending to the U.S. Treasury. The Treasury first borrows money to cover the government’s budget deficit by issuing IOUs – short-term or longer-term securities – to financial institutions or larger private lenders.

The Federal Reserve then goes into what is called the “secondary market” and offers to buy some of those securities being held by financial institutions or individuals, and pays for them by creating new money that then enters the banking system when those who have sold those government securities to the Federal Reserve deposit the check payments into their bank accounts.

The banks receiving those additional deposits of this new money now have larger excess cash balances with which to extend loans (after setting aside a small fraction as a required cash reserve against the depositor’s newly deposited money).

Finding themselves with larger available funds to lend, banks with try to attract interested and willing borrowers by lowering the rates of interest at which they offer to lend, given such things as the potential borrower’s creditworthiness and the type and term of the loan.

This includes the short-term Federal Funds rate at which banks are lending to each other. Money is said to be “easy” when the Federal Funds rates is low or falling, since this means the banking system is awash with cash to facilitate the reserve requirements of those banks briefly short of required reserves.

This process is reversed when (or if) the Federal Reserve sells government securities rather than buying them. The purchasers of those Treasury securities from the Federal Reserve’s portfolio pay for them out of their bank accounts. This “drains” reserves out of the banking system, tending to push up interest rates, as funds for lending purposes (all other things remaining the same) are reduced. 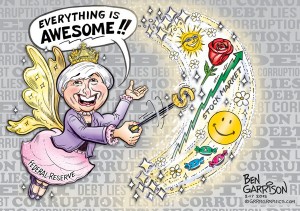 Since 2009, the Federal Reserve has been adding loanable funds into the banking system is such a large amount (around an extra $4 trillion) over the last five and a half years that the Federal Funds rate, when adjusted for the rate of price inflation has been “negative” virtually the entire time, as have one-year Treasury securities.

And reflecting this, interest rates on various commercial and other loans have been “dirt cheap,” again, especially when adjusted for price inflation as measured, say, by the Consumer Price Index.

It may be asked, why, if this is the case, price inflation has not been much higher with $4 trillion of extra loanable funds in the banking system? Sure, with that much additional money in the economy prices in general should have been rising much higher than the CPI measured rate of price inflation of far less than two percent a year.

Fearful of the price inflation its own “easy” monetary policy might generate, the Federal Reserve has been paying banks not to lend a sizable portion of that $4 trillion by offering banking institutions a rate of interest slightly above what it could earn by lending to you and me. Thus, nearly $3 trillion of the $4 trillion have sat in the banks as unlent “excess reserves.”

In viewing and treating interest rates as “policy tools” to influence the general levels of employment and prices in the economy, the Federal Reserve prevents interest rates from doing their “job” in a functioning market economy.

Market-Based Interest Rates have Work to Do

In the free market, interest rates perform the same functions as all other prices: to provide information to market participants; to serve as an incentive mechanism for buyers and sellers; and to bring market supply and demand into balance.

Market prices convey information about what goods consumers want and what it would cost for producers to bring those goods to the market. Market prices serve as an incentive for producers to supply more of a good when the price goes up and to supply less when the price goes down; similarly, a lower or higher price inﬂuences consumers to buy more or less of a good. Finally, the movement of a market price, by stimulating more or less demand and supply, tends to bring the two sides of the market into balance.

Market rates of interest balance the actions and decisions of borrowers (investors) and lenders (savers) just as the prices of shoes, hats, or bananas balance the activities of the suppliers and demanders of those goods. This assures, on the one hand, that resources that are not being used to produce consumer goods are available for future-oriented investment, and, on the other, that investment doesn’t outrun the saved resources available to support it.

There is one crucial difference, however, between the price of any other good that is pushed below that balancing point and interest rates being set below that point. If the price of hats, for example, is below the balancing point, the result is a shortage; that is, suppliers offer fewer hats than the number consumers are willing to buy at that price. Some consumers, therefore, will have to leave the market disappointed, without a hat in hand. 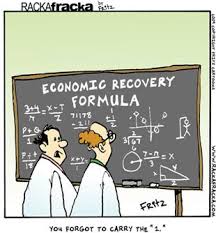 In contrast, in the market for borrowing and lending the Federal Reserve pushes interest rates below the point at which the market would have set them by increasing the supply of money on the loan market. Even though savers are not willing to supply more of their income for investors to borrow, the central bank provides the required funds by creating them out of thin air and making them available to banks for loans to investors. Investment spending now exceeds the amount of savings available to support the projects undertaken.

Investors who borrow the newly created money spend it to hire or purchase more resources, and their extra spending eventually starts putting upward pressure on prices. At the same time, more resources and workers are attracted to these new investment projects and away from other market activities.

The twin result of the Federal Reserve’s increase in the money supply, which pushes interest rates below that market-balancing point, is an emerging price inﬂation and an initial investment boom, both of which are unsustainable in the long run. Price inﬂation is unsustainable because it inescapably reduces the value of the money in everyone’s pocket, and threatens over time to undermine trust in the monetary system.

The boom is unsustainable because the imbalance between savings and investment will eventually necessitate a market correction when it is discovered that the resources available are not enough to produce all the consumer goods people want to buy, as well as all the investment projects borrowers have begun with the newly created money for which real savings does not exist to complete or fully sustain them.

Federal Reserve Policies Bring About the Boom and the Bust

What is important to understand is that while price inflation carries it own negative effects on the economy by eroding the real value, or buying power, of the money in people’s pockets, the most serious consequences of monetary expansion and interest rate manipulation are those distortions and imbalances brought about in the underlying supply and demand relationships between savings and investment in the economy.

That is why even if price inflation, as measured by such statistical methods as the Consumer Price Index, may seem moderate or even near zero, as in recent circumstances, the most serious effects brought about by Federal Reserve monetary policy are those beneath the surface of the macroeconomic aggregates of total employment, total output, or the “general price level” of goods and services.

Janet Yellen and the other members of the Board of Governors may be waiting for price inflation to rise into the neighborhood of two percent a year (their desired “target” for inflation) before being seriously concerned about the impact of their own easy money policies. But by that time, beneath that macroeconomic surface of statistical aggregates and averages, the savings and investment patterns and the use and allocation of labor and other resources among different sectors and activities in the economy will have been given a “wrong twist.”

As a consequence, Yellen’s monetary and interest rate policies meant to assure full employment and stable prices will have set the stage for another “bust” following another unsustainable “boom.”

In her address in Rhode Island Janet Yellen recalled taking economics classes at Brown University and thinking, “Gee, I didn’t realize how much influence the Federal Reserve has on the health of the economy. If I ever have a chance at public service” working at the Federal Reserve “would be a worthwhile thing to do.”

The only way to bring an end to these cycles of booms and busts is to end Federal Reserve power and authority to manipulate the money supply and interest rates. But that is unlikely to happen any time soon with “activist” policy addicts like Yellen running the central bank who think it is “a worthwhile thing to do.”

In recent months talking heads, disappointed with the lack of economic recovery, have turned their attention to wages. If only wages could grow, they…