China’s stock market is purportedly all fixed and Thursday’s 6% bounce is just the beginning. Indeed, Goldman Sachs has already reiterated that the whole thing is on the level, and that stocks will again be taking flight:

Right. The Chinese economy is in an obvious deepening swoon and the median company on the Shanghai exchange had a PE ratio of 60X before the recent break. But no matter. Not only does everything financial race the skyscrapers to the sky in the land of red capitalism, but valuation upside is apparently whatever the comrades in Beijing want it to be.

Says Goldman’s chief stock tout for China,“It’s not in a bubble yet.”.

Why? Because “China’s government has a lot of tools to support the market.”

To be sure, the confident Mr. Kinger Lau was still in diapers when Mr. Deng proclaimed that it was glorious to be rich. Or stated differently, when Deng set aside Mao’s mistaken maxim that power comes from the barrel of a gun in favor of the thoroughly modern notion that prosperity comes from the end of a red hot printing press. 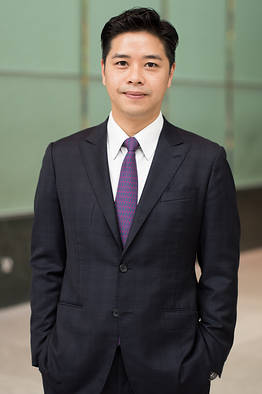 Actually, that’s the heart of the matter. Mr. Lau and perhaps 50 million other Chinese punters believe that growth and wealth are gifts of the state. That is, they believe red capitalism works because the comrades in Beijing are always ready to inject “whatever it takes” by way of stimulus, guidance, controls, ever more debt and now, apparently, prison sentences, too, to keep the bubble expanding.

That millions of Chinese citizens are being annihilated financially is hardly surprising. After all, the $3.5 trillion lost in the four weeks since the June 12th peak was pure casino wealth. It did not even exist as recently as March 17.

That’s right. The Shanghai composite first reached the 3500 level (during this trip) exactly 60 days before hitting the June 12 high of 5180. So what amounted to a 50% gain in no time ended up a 30% loss in even less time. 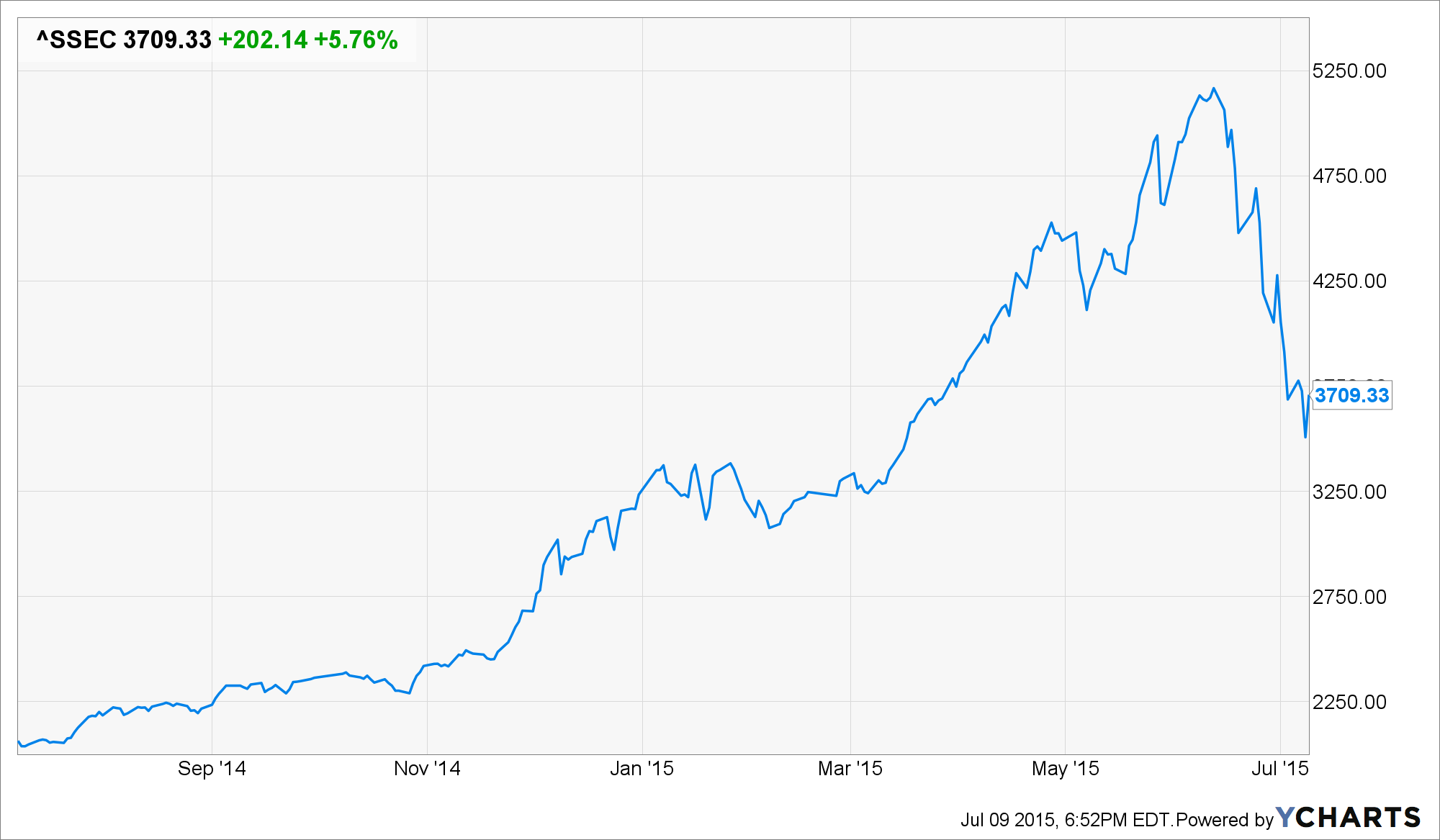 There is no need to be pedantic about this. There is no known form of honest economics in which a $3.5 trillion bubble—equal to 35% of GDP—-can go through a birth and death cycle in a mere 80 days. Nor should anyone in their right mind believe that the Shanghai/Shenzhen casinos have any resemblance to an actual stock market.

After all, during Wednesday’s plunge it seems that trading in 1350 of the 2900 companies listed on these exchanges were halted by the companies themselves and another 750 were halted by 10% limit down rules. Yes, you can apparently stop a selling panic, at least momentarily, when 70% of the names go radio silent——especially when, at the same time, the heavy hand of the state suddenly morphs into the shape of a mailed fist.

Stated differently, the desperate comrades in Beijing threw open the People’s Printing Press of China to fund ostensibly unlimited margin loans while simultaneously opening the doors to a cavalcade of paddy wagons instructed to round up anyone with the temerity to sell a stock. And in case the meaning of mobilizing the gendarmes was not self-evident, every company which had sold stock during the last six months got an personalized order to buy back this same shares forthwith.

All of this desperate action, of course, is only suppressing the problem, not solving it.

The (trading) suspensions, which cast doubt on authorities’ pledge to give markets a greater role in the world’s second-largest economy, mean that the Shanghai Composite Index’s 5.9 percent tumble on Wednesday was probably understated. Investors who got stuck in their positions are turning elsewhere to raise cash, fueling the biggest drop in a month in Chinese government bonds.

Indeed, the regulatory authorities in Beijing are so desperate that they are allowing margin calls to be answered by pledging the millions of empty apartment buildings that Chinese punters were earlier lured into acquiring. Now that would make even Charles Ponzi envious.

So are these people out of their minds? China is a powder keg of debt. In fact, some $28 trillion of it. And, according to the bean counters at McKinsey, upwards of $21 trillion of that was created in just the last 90 months—–during which time China’s GDP rose by only $5 trillion.

Apparently, even the comrades in Beijing had gotten a tad nervous about the sustainability of creating $4 of debt for each $1 of new GDP. Indeed, their “reform” plan was to unleash “market forces” and to encourage companies to shed their mountains of debt by raising equity capital in a vibrant stock market.

Well, the stock market got vibrant all right and during the past year several hundred billion of new equity was raised via IPOs and secondary offerings. But the debt pea was just being moved under another shell.

In fact, margin debt soared by 5X in less than one year. Nothing like this has occurred anywhere in the world since, well, 1928-1929 on Wall Street.

But the debt-fueled mania that under-pinned America’s Great Crash turns out to be tame by comparison. That’s because the above graph only covers official margin debt supplied by stock exchange brokers. It appears that China’s out-of-control shadow banking system provided again as much, and without any rules as to collateral maintenance or the financial capability of borrowers.

So compute the sum of combined margin loans from stock brokers and shadow bankers and express the result in US dollars. What you get is about $800 billion—–of which upwards of $600 billion was advanced in just the last 12 months!

Now that’s 6% of GDP mainlined right into casinos that are 80% comprised of mom and pop retail investors. That the resulting bubble has burst and made of mockery of Beijing’s market based reform plans is evident enough. What is truly frightening is that China’s authorities are so desperate that they are now attempting to reflate the very same speculative bubble that brought their financial system to the brink.

What is even more telling, however, is that the clueless ramblings of a naïve kid just out of the London School of Economics gets the Goldman Sachs imprimatur. And that embarrassing state of affairs is the key to the global financial calamity just ahead.

As Nixon might have said, they are all Keynesian statists now. Once upon a time, the grey beards of Wall Street would have been horrified by the printing press economics of today’s central banks, and would have had no trouble at all seeing that China is the greatest eruption of unsustainable debt, wasteful construction and rampant speculation in human history. It has precisely nothing to do with capitalism or any possible form of sustainable economic growth and wealth creation.

In the process of taking its debt from $2 trillion in the year 2000 to $28 trillion at present, in fact, China has erected an endless string of uneconomic public facilities and industrial white elephants that boggle the mind. For instance, it has 1.1 billion tons of steel capacity——400-500 million tons more than its domestic economy will ever be able to use on a sustained, sell-through basis. In fact, its “excess” steel capacity is greater than the total steel industries of the US, Europe and Japan combined!

Likewise, it ramped up a cement industry of 2 billion tons that is double or triple what will be needed when its construction of empty apartment buildings, unused airports, carless highways and bridges and pointless high speed rail lines finally comes to an end. Indeed, during the three years ending in 2014, China produced more cement than did the US during the entire 20th century.

The parade of excess capacity and white elephants is virtually endless and includes copper products, aluminum, solar panels, construction machinery, ship-building and every manner of consumer goods. That used to be called “malinvestment”, and its what happens when central banks flood the world with uneconomic credit and governments override every semblance of financial discipline and honest calculation via endless bailouts and safety nets for gamblers.

So now China’s domestic hothouse has reached the limits of credit fueled asset expansion. The great maw of its absurdly overbuilt industries is already heaving up deflationary gales on world markets. Its iron ore and steel industries, for example, are literally crashing and flooding markets with more cheap steel than has ever before been imagined:

Ore with 62 percent content delivered to Qingdao sank 5.1 percent to $49.60 a dry ton on Tuesday, falling for a ninth day to the lowest since April 13, according to Metal Bulletin Ltd. Prices entered a bear market on Monday, dropping more than 20 percent from a June high. On the Dalian Commodity Exchange, futures plunged 7.2 percent to a record low on Wednesday, while the August contract on Singapore Exchange Ltd. fell to $42.20.

The trend echoes a similar one in steel in the second half of last year, when Chinese exports of excess supplies sent prices tumbling 30 percent. The nation’s aluminum industry quadrupled in the past decade with smelters churning out record amounts of the metal used in everything from packaging to car bumpers.

Metals including nickel and silver on the Shanghai Futures Exchange fell to their daily limits, while rubber entered a bear market. The volume of copper traded was almost six times the three-month average. Steel rebar and iron ore, as well as eggs, sugar and soybean meal dropped to the lowest level allowed by their exchanges.

Beijing’s profoundly stupid attempt to keep the Ponzi going by levitating the stock market is now coming home to roost domestically, as well. An increasing number of car buyers in China are canceling their purchases and risking forfeiture of their down payments after a stock-market rout.

At the end of the day, the firestorm now engulfing the China’s stock market will shake the regime itself. China’s current maximum ruler, Xi Jinping, is self-evidently an economically illiterate thug. Accordingly, there is no measure he will not try in order to arrest the current meltdown.

But as one observer noted, he has put the regime on the line. When the current desperate measures finally fail, China will descend into social and economic chaos:

By urging households to buy stocks, Xi has put his credibility—as well as that of the Communist Party—on the line. The stimulus measures’ failure may incite outrage among those very mom-and-pop investors who have lost everything. Though it’simpossible to tell what might ignite it, mass social unrest in China would shake the entire world.

The downside of that wager is profound indeed. The government’s creation of the Chinese bull market has disproportionately benefitted state-owned companies—and therefore the Communist Party—by replacing government-guaranteed debt with equity. That equity, of course, has been funded by the little guy—the second, and much bigger, part of the problem. When the state press and government officials began pumping stocks about a year ago, they essentially made a promise to protect the savings of tens of millions of households.

The ramifications of regime failure in China are surely inestimable. But one thing is certain. The present worldwide faith preached by Goldman and its imitators in the ability of governments and their central banking branches to keep the bubble expanding will suffer a fatal rebuke.
None too soon.
Tags from the story
Central Banking, China, Economic Cycles, Markets
Facebook Twitter Pinterest
LinkedIn Email

Written By
Max Rangeley
More from Max Rangeley
In short, the dot-com bust was the last chance for the Fed...
Read More

0 replies on “Stockman: Why China’s Market Isn’t Fixed And The Global Bubble Will Keep Imploding”