Everyone seems to be focusing on Greece these days – a country so indebted that it needs even more loans to repay just a fraction of its gigantic credits. Clearly this is unsustainable and something has to give. Even the IMF agrees.

But what about the other Southern European countries?

Actually, Portugal’s financial situation is looking particularly shaky, and any hiccups could have serious cross-border repercussions from Madrid all the way to Berlin.

The prevailing narrative is that Portugal has been a star pupil compared to Greece, with austerity delivering much better results:

So it is understandable that hopes for Portugal’s future are much rosier than in Greece… AND YET ITS FINANCIAL SITUATION IS ALSO UNSUSTAINABLE!

We realize that this is quite a bold statement. So to support our argument we will use some simple math to show where government finances stand after five years of austerity.

The Bank of Portugal (“BdP”), Portugal’s central bank, publishes debt statistics of key sectors in the economy on a quarterly basis. The link to the latest publication can be found here.

As of March 2015, non-financial public sector debt stood at €288 billion, or 166% of GDP. You may think that there’s something odd right there because you are used to hearing that the Portuguese government “only” owes 130% of its GDP. That’s because the media generally uses Maastricht treaty calculations, not the total amount that the government owes as a whole (which includes public companies, for instance). But what’s 36 percentage points of GDP among friends?

See what we are getting at here?

USING FAIRLY OPTIMISTIC ASSUMPTIONS, THE PORTUGUESE ECONOMY IS UNABLE TO GROW ENOUGH TO COVER THE INTEREST ON ITS GOVERNMENT DEBTS, LET ALONE AFFORD ANY PRINCIPAL REPAYMENTS!

As a result, government debt-to-GDP can only rise from here, especially as the government seems incapable of balancing the books.

Portuguese Government Debt as % of GDP

It should be obvious why Portugal’s creditors expect more austerity still: the government needs to generate a big budget surplus to at least stabilize the debt situation (and a gigantic one to actually start paying down the debt). But with an ageing population, sluggish internal demand and the recessionary impact of having to further reduce government expenditures in this context, the hurdle keeps getting higher. And if the global economy goes into a recession, the government’s debt ratios might just explode higher from here.

A Portuguese default could be much more problematic than Greece’s for a couple of reasons: i) despite trillions in central bank intervention and taxpayer funds at risk, it becomes undeniable that the Southern European crisis is far from being resolved – Mario Draghi’s “whatever it takes” was just not enough; ii) European taxpayers are primarily on the hook in case of a Greek debt haircut, but there are still plenty of private creditors left in Portugal – including from Spain, France and Germany. So things could escalate fairly quickly.

“But Portugal Can Grow its Way Out of this Mess!”

As any skeptic would argue: Portugal’s debt-to-GDP statistics are skewed because if the economy was operating normally the GDP would be much higher and the debt ratio would thus be much more manageable…

Sorry, but this is a speculative statement – and certainly not based on fact. That “normal” GDP was inflated by way too much debt, both public and private, accumulated over many years.

Of course anything can happen in these uncertain times, but there’s a large body of evidence suggesting that Portugal is in big financial trouble. Far from us wanting to be the prophets of doom here, but to come up with a viable solution we need to fully understand the problem first. 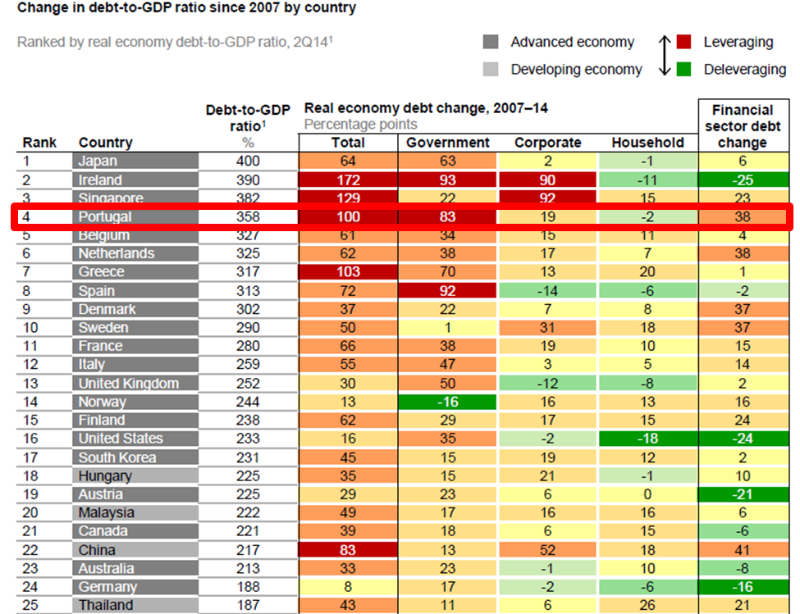 So what do bond investors make of all of this?

Evidently, that the European Central Bank has their backs, because 10-year Portuguese bonds are currently trading at only 186 basis points over German Bunds, compared to Greece at 1043 basis points and the US at 155 basis points (in USD of course).

But should they be concerned?

Here’s what José Socrates, Portuguese Prime Minister from 2005 to 2011, had to say about the country’s financial situation, soon after leaving office:

“For countries like Portugal and Spain, the idea that we now have to pay the debt is a childish idea. Sovereign debts, as it is taught in economics – that’s what I have studied for some time – are by definition eternal. Debts are to be managed. That’s what I studied. Of course we should not let debt grow too much because that’s a burden on expenses (…)”.

Yes. They should be very concerned indeed. And so should the rest of us.

By Dr Frank Shostak On March 11, 2021, the US President Biden introduced his $1.9 trillion COVID-19 stimulus plan. The President also announced a…