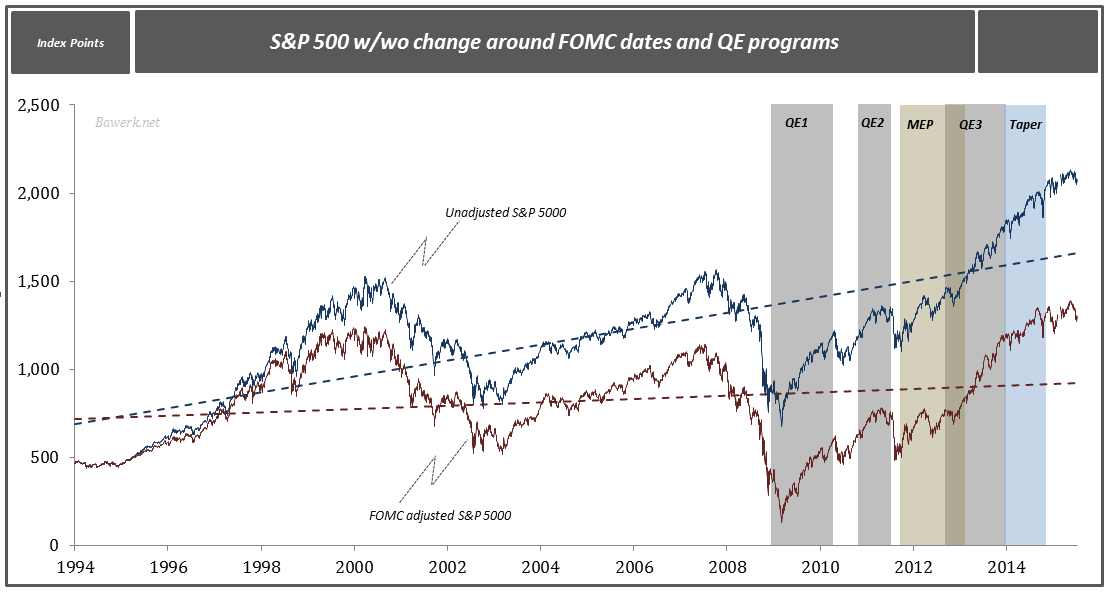 The Humphrey-Hawkins Full Employment and Balanced Growth act signed into law by President Jimmy Carter on October 27, 1978, tried to translate into practical reality the right of all Americans to get useful paid employment at fair rates by embracing Keynesian economic theory. If someone magically has a right to work, someone must necessarily lose their right not to employ. And what is fair? Is the going market rate fair, or is that too low? Or even too high?

The act wants to achieve a rate of unemployment of no more than three per cent among individuals aged 20 or more and four per cent for people aged 16 or more. In addition the act (remember, this was enacted in the late 1970s) wants to reduce the consumer price inflation to no more than 3 per cent (Section 4).

Generally, Keynesians tries to fix both quantity and price, and as we all know, that is a logical impossibility. But hey, Keynesianism is not about logical consistency, it is about power.

Messrs Humphrey and Hawkins want to achieve all this primarily by relying on private sector expansion (Section 2), but where there are bottlenecks the President must step in to alleviate to not create inflation. Unless scarcity is abolished in a Garden of Eden state of affairs there will per definition always be bottlenecks in any society. Fittingly, nowhere is the expansion of money and credit mentioned as a tool to fight inflation.

In addition, to stabilise prices the act established stockpiles of various commodities which can be used to smooth out fluctuations in price signals given to the very same private sector the act pay lip service to (Section 8)

And for good order, since the free market society is deemed to push the proletariat down to subsistence level, if they can get work at all, the act requires the President to initiate public works projects and the development of “shovel ready” projects that can be started in short order to move the masses of the unemployed to productive work, such as digging holes and filling them back up.

The inconsistencies and wrongheaded policy recommendations that are baked into less than 30 pages are too much to address here, but we will look at one interesting outcome that has come from this. And no, we don’t mean Yellen’s recent blabber to congress. That is inconsequential and useless for all but highly leveraged “hedge” funds in need of knowing when they get another 25 basis points deducted from their profits.

We are talking about the institutional change at the Federal Reserve. Somehow these people believe that changing the rate of interest in the interbank market among Wall Street institutions is a good tool to secure the right Joe Sixpack in Stickney, SD has to a fairly paid job.

Couple Humphrey-Hawkins with a belief in the upper echelons of academia that has smitten every member of the political class, that as long as people feel rich they will spend more money and hence goose GDP numbers, and voila the whole thing become self-funding and self-perpetuating. We wrote more about this in our post titled Goebbelnomics.

If this is indeed the case we would expect a bias in favour of higher stock prices among members of the FOMC, because they could utilise this simple transmission mechanism to boost employment.

To test this hypothesis we made a simple adjustment to the S&P500 index. We assumed there were no change in the index on the days around the FOMC press release and then compared this to the original index value.

The result is striking as it goes to show how biased the FOMC has become. An unbiased FOMC would have no lasting impact on the stock market and the difference between the two series should be negligible. However, the unadjusted actual series is 37 per cent higher than the one which does not move on FOMC dates. The simple trend line on the adjusted series shows no notable leaning, while the original series clearly does. 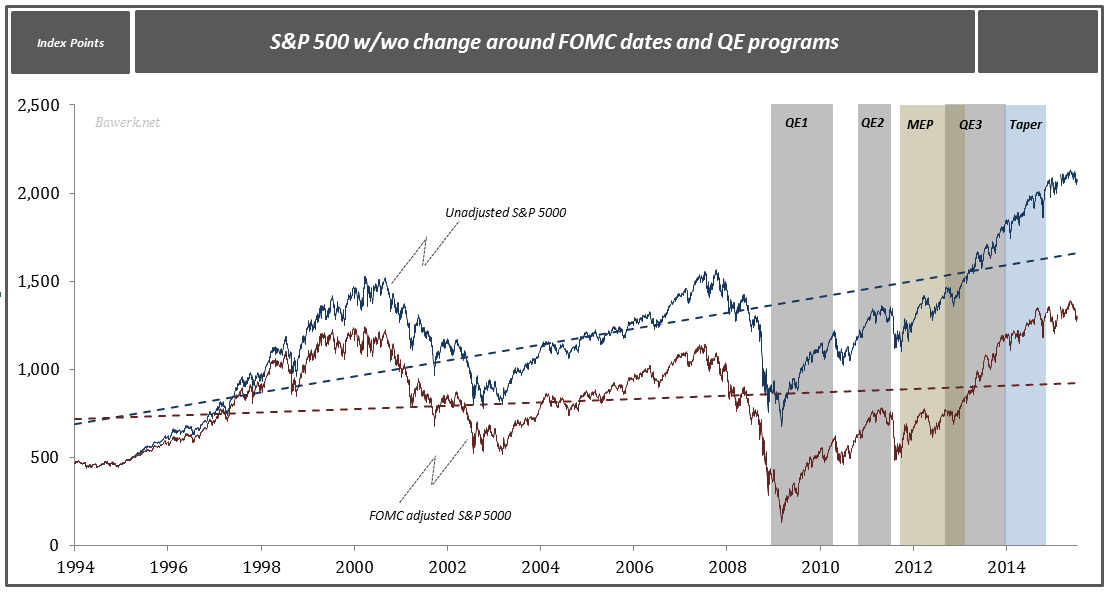 We can take this a step further and substitute the FOMC adjusted S&P 500 series for the original and calculate what the cyclical adjusted price earnings (CAPE) ratio would have been. 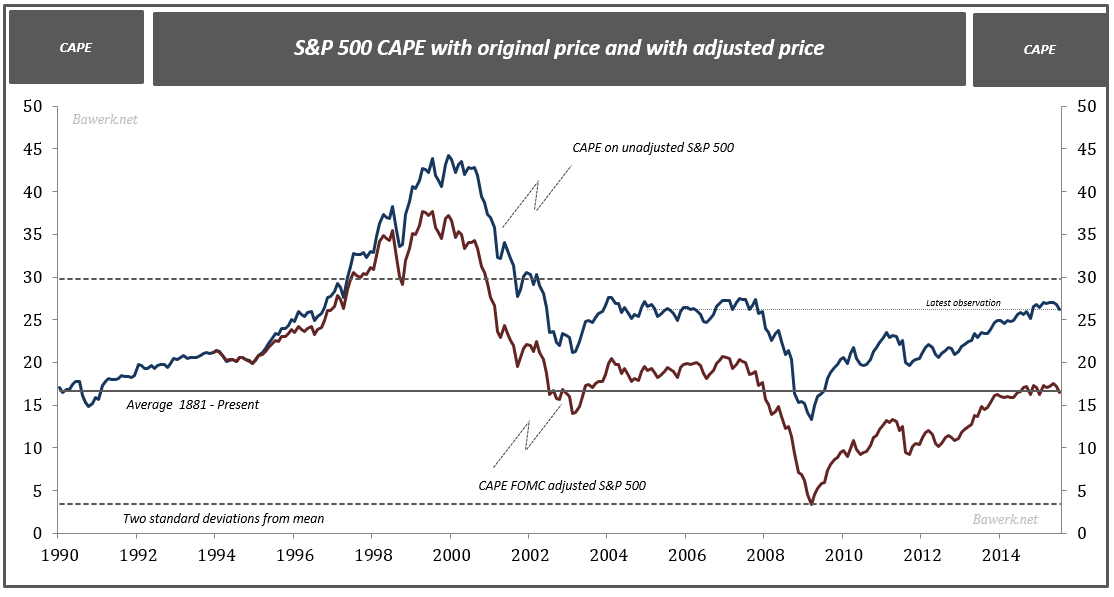 So what does all this have to do with Humphrey-Hawkins? For the FOMC to reach its mandate of full employment they boost stock prices which then creates employment in bubble jobs. In The United States is not Greece… we outlined the idea of a job quality index which counts jobs based on their pay and hours; service based jobs typically score very low. For example one mining job counts for 1.35 jobs, while a job in leisure and hospitality only counts 0.38 with this methodology.

When people feel rich, they spend more money on the low quality bubble jobs, and hence employment reacts accordingly. This is obviously entirely unsustainable as spending paid for byfeelings manipulated by the FOMC accounts to nothing more than pure capital consumption, and the money flow will disappear as soon as the FOMC tighten the screw and the good feelingdisappears along with the stock market gains.

The third and last chart shows you exactly how corrupted the FOMC have become. By altering the stock market index they believe they can reach the Humphrey-Hawking requirement, all in the spirit of free market enterprise we are sure.

And that ladies and gentlemen is what a modern centrally planned society looks like!

0 replies on “Eugen von Böhm-Bawerk: How the FOMC got institutionally corrupt”