In several articles we have shown how the world changed from the 1970s with the breakdown of the old Bretton-Woods system. For example, in China’s unfortunate dependence on the Eurodollar expansion we showed how economies like Japan and China boomed on the back of what appeared to be real demand for their products, but was nothing more than an un-backed expansion of the world reserve currency; which promptly collapsed when further ‘dollar’ expansion came to an abrupt halt, either as a result of political intervention (Plaza Accord) or because of too much capital consumption and subsequent financial crisis (Lehman).

In Goebbelnomics – paper propaganda we showed how today’s monetary masters and their henchmen tries to condition the broad masses of people to spend and borrow money in a fallacious belief that an ever increasing level of spending – i.e. increased velocity of money – can maintain an economic perma-boom and by extension abolish the dreaded business cycle.

We will change tack a bit from here and now show how exponentially issuance of ‘dollars’ structurally changed the US economy itself and why it will eventually end in tears.

Exhibit 1 depicts the structure of the US labour market where we calculate the share of the labour force employed in primary, secondary and tertiary sectors of the economy.

In the early 1800s most people in the US were unsurprisingly working in primary, or agricultural, occupations. Almost 90 per cent of all workers were employed in this line of work, while only a tiny fraction worked in manufacturing and service based industries.

The reason was simply because agricultural output could scantily support more than the family working on the farm, producing very limited surplus to support other parts of the economic structure. However, as increased productivity in farming, first through opening up the western frontier and mechanization and later through crop yield improvements, surpluses grew and thus freeing up resources to be allocated to other sectors.

Source: Meiburg and Brandt “Agricultural Productivity in the US 1870 – 1960“, US Department of Agriculture (USDA), Bawerk.net

A relatively free and unhampered market meant workers got the right incentives to find different work than farming as a better life could be had by shifting from primary to secondary and tertiary sectors. In addition, change was slower, so shifts were to a larger extent allowed through generational leaps rather than costly individual reallocation.

As more capital and labour found its way into manufacturing its productivity grew and could in turn support more service workers by freeing up resources through new innovations permitting production for the masses. Henry Ford’s assembly lines spewing out Model-Ts come to mind. From 1800 to the 1970s the share of manufacturing and service employment grew more or less in tandem as a manufacturing worker could more easily support more service sector workers.

From the 1970s on the other hand the share of manufacturing employment in the labour force started to diverge from that of service sector jobs.

If manufacturing output witnessed a sudden surge in productivity akin to that of bushel per acre in the agricultural sector from about 1940 we could conclude that this was a sustainable trend. But that is not what happened. On the contrary, from the 1970s US labour productivity growth slowed down considerably and the hyped productivity “surge” in the 1990s only helped slow the downward trend which actually accelerated its downward slide after the brief Clintonian hiatus. 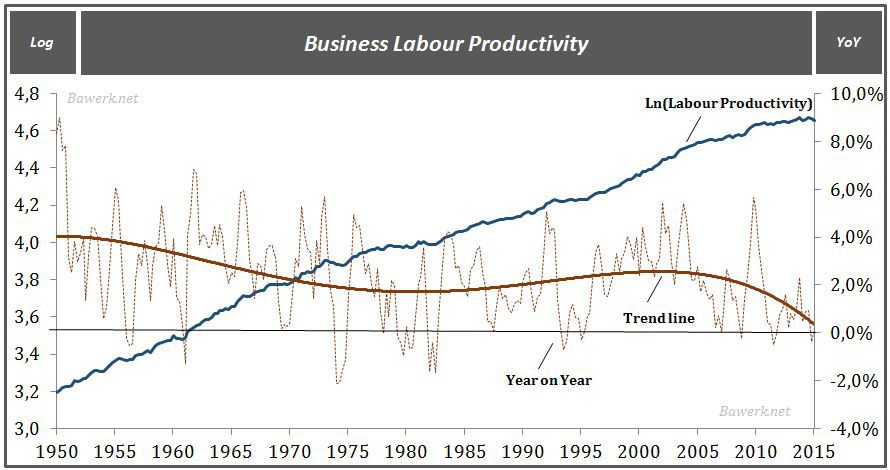 So no, manufacturing productivity cannot explain the diverging trend in employment from the 1970s, but the rapid expansion of ‘dollar’ issuance can.

Instead of relying on increased productivity domestically, Americans exorbitant privilege made sure they could consume tradable goods from vassal states such as Germany, Japan and South Korea more or less for free.

When the Chinese voluntarily entered the scheme of getting paid in non-redeemable claims to non-existent US manufacturing output the edifice took on a whole new dimension. The paradox of accepting these claims is so absurd simply because had China and the vassal states not accepted them, they would continue to be money good; securely backed by a healthy manufacturing base. It wasn’t until the Americans were free to issue unlimited amounts of ‘dollars’ that these claims lost their soundness in a rambunctious belief in the never-ending global supremacy of US manufacturing.

Now the damage is done. The gross misallocations that have plagued the world economy for well over four decades cannot be corrected without a cataclysmic event that will dramatically change living standards as the US realign their manufacturing and service sectors. But it cannot continue indefinitely either. Something will have to give.

Needless to say, when it does “give” it will obviously have worldwide consequences. The major exporting nations will understand that they are overexposed to manufacturing to the same extent that the US is overexposed to service sector industries. Further down the value chain commodity producers will see less demand for their produce as manufacturing powerhouses falters.

The best case scenario is that this process will be orderly with capital and labour reallocations steady over several years, if not decades. A more likely scenario is that it happens more sudden in a global depression where all forms of general government balance sheet expansion becomes counterproductive as people loses confidence in both central banks and various fiscal regimes.

Next week, in the second episode, we will show how this has affected the US worker more specifically.

Reading through Security Analysis, the roadmap for investing first published in 1934 by Benjamin Graham and David L. Dodd, I learned something quite interesting: The basis…