In short, the dot-com bust was the last chance for the Fed to pivot and liberate the American economy from the corrosive financialization it had fostered. A determined policy of higher interest rates and renunciation of the Greenspan Put would have paved the way for a return to current account balance, sharply increased domestic savings, the elevation of investment over consumption, and a restoration of financial discipline in both public and private life. Needless to say, the Fed never even considered this historic opportunity. Instead, it chose to double-down on the colossal failure it had already produced, driving interest rates into the sub-basement of historic experience. This inexorably triggered the next and most destructive bubble ever. – David Stockman, The Great Deformation

Over the course of the roughly twelve and a half years from Black Monday to the beginning of the end for the dot-com bubble, the Fed effectively engineered a mania by facilitating the explosion of bank loans, GSE debt, and the shadow banking complex, which together grew from under $5 trillion in 1987 to $17 trillion by the beginning of 2000.

For evidence that this expansion was indeed the work of monetary authorities and was not funded by an increase in America’s savings, look no further than the following chart which shows an accommodative Fed and an increasingly savings averse American public: 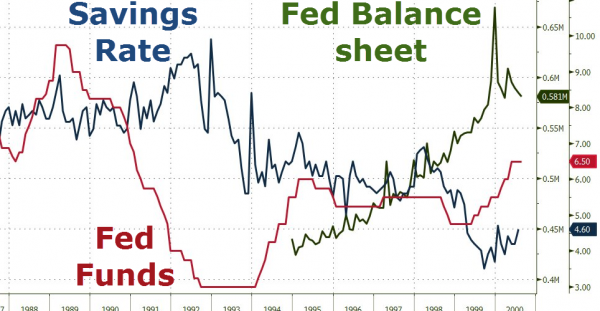 When the Nasdaq collapsed, the Fed was given an opportunity to restore some semblance of order and discipline to a market that had learned to rely on the Greenspan put. Instead, it chose to inflate a still larger bubble and now, courtesy of Janet Yellen’s friends at the San Francisco Fed, we know precisely why.

From the San Francisco Fed

Wild swings in asset prices over the past 20 years and the associated boom-bust cycles have sparked considerable debate about how monetary policy might play a stabilizing role.

We can now calculate how much interest rates would have had to increase relative to the historical record to keep housing prices in check. Figure 4 displays the historical U.S. post-World War II ratio of house prices to income, stated in log terms so that changes can be read approximately as percentage changes. That ratio had declined steadily until 2002. Using a linear approximation from 1950 to 2002, we extrapolate the trend rate through 2006. We then calculate the percent difference between actual observed house prices and this trend, which turns out to be about 40%. A similar number would result from comparing house prices to the consumer price index, so this difference is not particular to our choice of normalization. The United Kingdom suffered a similar 40% house price boom. Since a 1 percentage point increase in the short rate translates into about a 4.4% decline in house prices, keeping house prices on trend would have required about an 8 percentage point increase in the federal funds rate in 2002 according to our calculations. 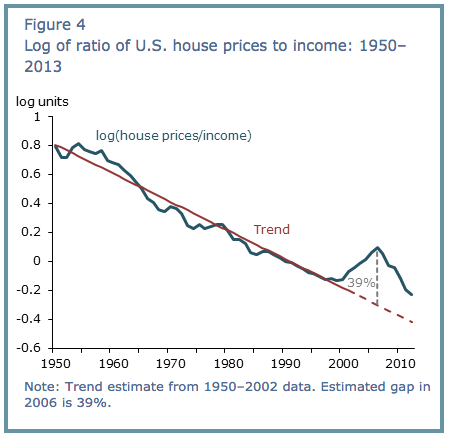 What actually happened? The federal funds rate, the Fed’s short-term policy rate, stayed between 1% and 1.25% from the end of 2002 until the middle of 2004. Starting in June 2004, the federal funds rate rose 4.25 percentage points, reaching 5.25% by June 2006. In our experiment, the rate would have been about 8 percentage points higher at the end of 2002, but would have ended at about the same level observed in June 2006. That is, preemptive interest rate policy would have been extraordinarily tight in 2002 then would have gradually abated to around the level eventually reached in June 2006. By our calculations, such a large increase in interest rates would have depressed output more than the Great Recession did, roughly speaking.

What is the takeaway then? Slowing down a boom in house prices is likely to require a considerable increase in interest rates, probably by an amount that would be widely at odds with the dual mandate of full employment and price stability. Moreover, the Fed would need a crystal ball to foretell house price booms. In restraining asset prices, while the power of interest rate policy is uncontestable, its wisdom is debatable.

Got that? In other words, the Fed would have needed to hike rates by 800 bps in the wake of the dot-com collapse in order to prevent the housing bubble. That would have purged the system and gradually, the FOMC could have eased by around 300 bps over the next four years. That policy course would have prevented the speculative bubble that brought capital markets the world over to their knees in 2008.

And why didn’t the Fed do this? Because “such a large increase in interest rates would have depressed output more than the Great Recession did, roughly speaking.” In other words, thanks to Alan Greenspan, the US economy cannot function under a normalized monetary policy regime, “roughly speaking.”

We suppose the only question now is this: if rates needed to be 9.25% in 2002 in order to completely disabuse markets of the idea that the Fed will everywhere and always move to support asset prices, how high should rates be today?