US real gross domestic product (GDP) grew faster than initially thought in Q2. GDP expanded at a 3.7% annual rate instead of the 2.3% rate reported last month and 0.6% in Q1. Most experts, in response to this figure, are now arguing that the US economy is strengthening visibly.

This, coupled with a relatively stable price level, raises the likelihood that the economy is approaching the path of healthy economic growth with stable price inflation. 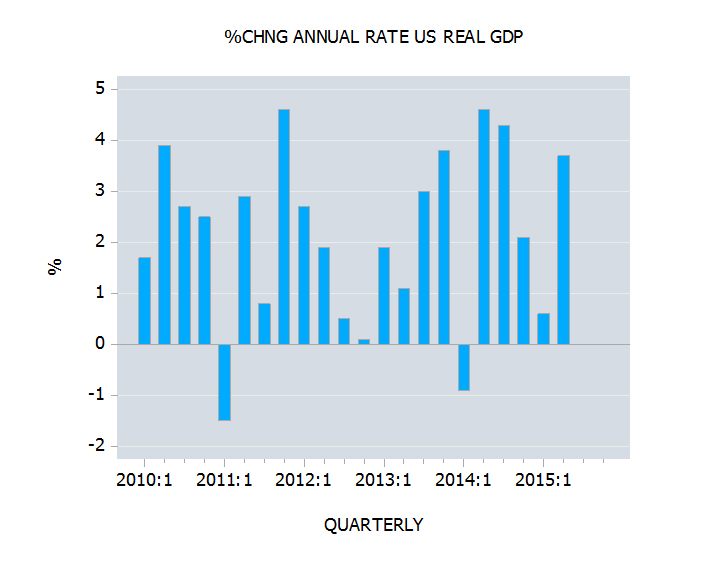 As simple as it sounds however, this cannot be done since we cannot add up potatoes to tomatoes to obtain a meaningful total. So from this perspective we cannot ascertain the total real wealth in an economy.

We suggest that real GDP doesn’t measure the real strength of an economy but rather reflects monetary turnover adjusted by a dubious statistic called the price deflator.

Obviously then the more money is pumped, all other things being equal, the stronger the economy appears to be.

In this framework of thinking one is not surprised that the Fed can drive the economy since by means of monetary pumping the central bank can influence the GDP rate of growth.

Whilst we cannot establish total real wealth we can, however, ascertain factors that undermine the real wealth formation.

One of the key factors here, apart from government outlays, is the monetary policy of the Fed.

Furthermore, since December 2008 the Federal Reserve interest rate target was kept at 0.25%.

Now, even in terms of the Government own data such as real income, economic activity doesn’t look that great, with the growth momentum of real income actually showing a visible softening.

The yearly rate of growth fell to 2.2% in Q2 from 3.3% in Q1. The key factor behind this emerging softening is a fall in the growth momentum of money supply during October 2011 to October 2013.

We suggest that this fall is positive for the health of the economy since it puts pressure on various bubble activities that undermine the wealth generation process.

0 replies on “Real GDP and the strength of US economy”