Right up until China threw the financial world into a frenzy by devaluing the yuan right smack in the middle of a stock market meltdown that Beijing was struggling to contain, bond market liquidity was all anyone wanted to talk about.

Of course we’ve been talking about it for years (literally), as have a few of the sellside’s sharper strategists, but earlier this year the mainstream financial news media caught on, followed in short order by the rest of the Wall Street penguin brigade, and before you knew it, even the likes of Jamie Dimon were shouting from the rooftops about illiquid corporate credit markets.

The problem, in short, is that the post-crisis regulatory regime has made dealers less willing to warehouse bonds, leading to lower average trade sizes, sharply lower turnover, and a generalized lack of market depth. That in turn, means that trading in size without triggering some kind of dramatic move in prices is more difficult.

But that’s not the end of the story.

Seven years of ZIRP have i) herded yield-starved investors into riskier assets, and ii) encouraged corporates to take advantage of voracious demand and low borrowing costs by issuing more debt. The rapid proliferation of ETFs and esoteric bond funds has encouraged this phenomenon by giving investors easier access to corners of the bond market where they might normally have never dared to tread. These vehicles have also given investors the illusion of liquidity.

Ultimately then, the picture that emerges is of an increasingly crowded theatre (lots of IG and HY supply and plenty of demand) with an ever smaller exit (dealers increasingly unlikely to inventory bonds in a pinch).

With that as the backdrop, we bring you the following excerpts from a new paper by Alliance Bernstein:

We agree that low liquidity is a risk—but by focusing on regulations, we think most investors are underestimating the gravity of that risk. While new regulations have contributed to the problem, there are sev- eral less obvious causes that have the potential to make the liquidity crunch worse.

Some stem from global central bank policies: easy money has driven government bond yields to record lows and forced yield-hungry small investors to crowd into the same trades. Another driver is caution by large institutional investors, who are less and less willing to take the long view in bonds and ride out short-term market volatility.

While regulatory changes have reduced the supply of liquidity, these trends have drastically increased the potential demand for it. None on its own is likely to trigger a major market crisis. But taken together, they’re creating a lot of dry tinder. And the next shock to hit markets— that prompts everyone to sell—might be the spark that sets every- thing ablaze. With volatility in fixed-income markets rising, investors can’t afford to take this risk lightly.

And here’s some further color on central banks’ role in creating these conditions (note the bit about what happens when markets that are driven solely by central bank liquidity suddenly reverse course):

When liquidity evaporated in 2008, central banks worldwide stepped in to provide it by slashing interest rates and eventually buying huge amounts of government bonds. These were emergen- cy policies, for use in an emergency. They were designed to flood the financial system with money, encourage risk-taking and get the economy moving again. Investors responded as policymakers hoped they would—by charging into riskier assets to earn a decent return.

If rallies are being driven by central bank liquidity rather than fundamentals, it follows that sell-offs should be, too. In fact, over the past two years, markets have undergone a series of sell- offs—one might call them miniature fire sales—in which bonds, stocks, commodities and other assets have all declined. None of these episodes have lasted as long or done as much damage as the sharply correlated declines in 2008—at least, not yet. Still, the pattern is disturbing.

Ironically, central bank policies that were applied with the best intentions and designed in part to boost liquidity are helping it to dry up. These easy money policies aren’t over yet. But with the Federal Reserve likely to raise interest rates later this year, the beginning of the end is in sight.

Finally, here’s a bit more on the relationship between reduced dealer inventories, increased access to the bond market for “mom-and-pop”, ETF liquidity, and what happens when someone yells “fire”:

While banks have been retreating from the bond market, investors have been charging into it. This is a direct result of central banks’ easy money policies: by driving interest rates to record lows, these policies pushed investors—even income-starved mom-and-pop investors—into riskier assets, such as high-yield bonds and emerging-market debt, to earn a decent return. In 2014, retail-oriented mutual and exchange-traded funds owned nearly 23% of the US high-yield market, up from 15% in 2006. Retail ownership of investment-grade bonds more than doubled over the same period.

The result: large numbers of investors are crowded into the same trades. That causes prices to trend strongly in one direction, but may leave the market vulnerable to a sudden correction if everyone wants to sell at once.

The fact that small investors are playing a bigger role in these mar- kets is important, because they tend to move into and out of assets often, depending on the latest headline or price trend. In recent years, investors have charged into—and out of—various assets, including high-yield bonds and emerging-market debt, with alarming frequency (Display 4). 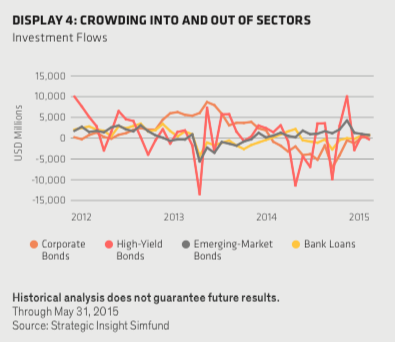 What’s more, a great many investors—and we suspect this even goes for some large ones—are venturing into riskier corners of the credit markets because central banks’ low-interest-rate policies have made it hard for them to find income elsewhere. Many are taking on more risk than they ordinarily would. When interest rates start to rise, government bonds or even cash may suddenly look more attractive, potentially causing a rush for the door.

In theory, investors can exit an open-ended mutual fund or an ETF at will. But the growing popularity of these funds forces them to invest in an ever larger share of less liquid bonds. If everyone wants to exit at once, prices could fall very far, very fast. A lucky few may get out in time. Others will probably get trampled.

Note that the last passage there is precisely what we began warning about earlier this year and indeed, the relationship between retail flows, ETFs, and shriking dealer inventories was recently the subject of a live debate between Carl Icahn and Larry Fink during which Icahn called BlackRock a “dangerous company” for providing the vehicles through which investors have been allowed to crowd into bonds.

For an in-depth look at what we’ve called “ETF Phantom liquidty” see our complete guide here, but for now, recall that as Howard Marks warned earlier this year, an ETF “can’t be more liquid than the underlying and we know the underlying can become quite illiquid.” This means that in the event flows into HY (or any other type of fund for that matter) suddenly become largely non-diversifiable (i.e. unidirectional), fund managers will either need to meet redemptions with borrowed cash or else venture into the illiquid markets for the underlying bonds and risk tipping the first dominoe on the way to a firesale.

With that, we’ll close by reiterating the fact that no fund manager in the world will be able to line up enough emergency liquidity to avoid tapping the corporate credit market in the event of panic selling in the increasingly crowded market for bond funds. In other words, when the exodus comes, the illiquidity that’s been chasing markets for the better part of seven years will finally catch up, and at that point, all bets are officially off.

Written By
Max Rangeley
More from Max Rangeley
In short, the dot-com bust was the last chance for the Fed...
Read More