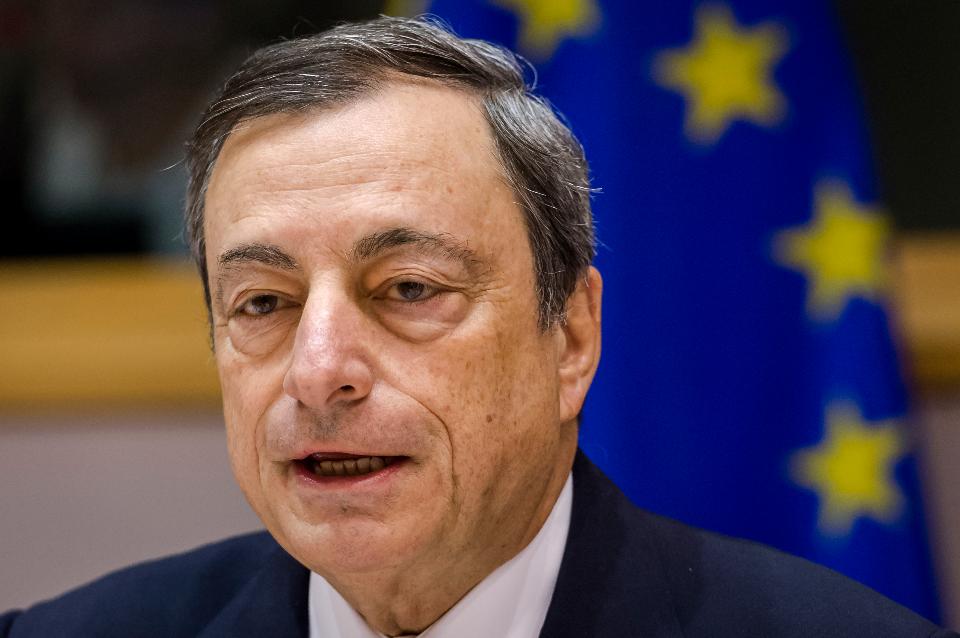 In anticipation of the U.S. Federal Reserve’s first rate hike in nearly a decade, $500 billion in capital outflows slammed emerging markets (EMs) last year–a slow-motion version of the 2013 “taper tantrum,” when the Fed signaled that the era of quantitative easing was coming to an end. IMF Managing Director Christine Lagarde has warned of a deeper and more disorderly downturn going forward if the pace of Fed tightening is more aggressive than markets are discounting.

Many of those EMs hit in 2013 remain in the crosshairs today, owing to sizable current account deficits and large sovereign or corporate dollar-denominated debt. Brazil, Russia, South Africa and Turkey look particularly vulnerable, caught between the rock of a faltering economy and the hard place of surging imported inflation.

Yet global monetary conditions today are actually more favorable for them than they were three years ago.

With the Fed’s rate hike on December 16, monetary policies in the developed world are entering a period of unprecedented divergence. While the United States tightens, the euro zone and Japan are set to continue pumping out massive amounts of new central bank liquidity through their own quantitative easing operations. This is creating unique conditions in global financial markets.

Playing the role of the Fed

As shown in the figure below, the European Central Bank (ECB) and Bank of Japan (BoJ) are effectively playing the role the Fed played three years ago with their large-scale asset purchase programs. In 2013, the Fed poured $1.1 trillion of new liquidity into financial markets, much of which made its way abroad. In 2015, the ECB and BoJ pumped in $1.1 trillion, and are set to pump in at least another $1.5 trillion in 2016. These euros and yen are at least as likely as the Fed’s dollars to find their way to emerging markets. 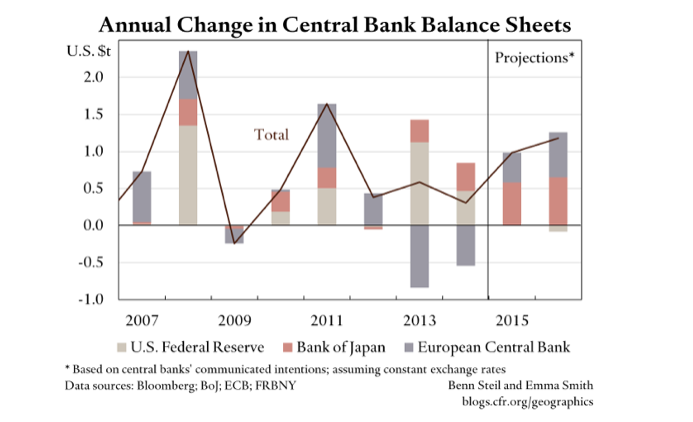 As new issuance of government debt is smaller in the euro zone and Japan than in the U.S., the ECB and BoJ have to purchase a larger amount of secondary market assets from private investors in order to meet their target quantity of purchases. Those investors will be looking for places to park their money and they will be no less likely than those displaced by Fed asset purchases to invest in emerging markets.

The flow to foreign assets

To see this, consider their investment options. One is domestic non-government bond or equity markets. In fact, these are smaller in the euro zone and Japan than in the U.S., which suggests less scope to reallocate to such markets. For one (large) class of investors–banks–there is also the option to increase lending to households and businesses. But the economic outlook remains weak in Europe and Japan, and weaker than in the U.S. at the time of the Fed’s QE3, suggesting fewer attractive opportunities to expand lending. If domestic markets and bank lending are likely to absorb less of the new liquidity than in the U.S., then a greater proportion of the money displaced by ECB and BoJ purchases will flow to foreign assets.

The worrying news is that the rising cost of dollar financing has been pushing EM sovereigns and corporates towards a new and riskier form of foreign-currency financing. Since early 2014, the dollar has appreciated by 24% on a trade-weighted basis while the euro has depreciated by 12%. Diverging dollar-euro interest and exchange rates have encouraged EMs to shift out of dollar debt and into euro debt. A fall in outstanding dollar-denominated debt of roughly $40 billion over this period has been nearly offset by a rise in borrowing in other currencies–mostly euros. We expect the recent Fed rate rise to accelerate the shift towards euro financing in 2016.

Since EMs conduct the bulk of their trade in dollars, this shift increases currency mismatch between their financing and receivables. They are essentially speculating on a falling euro.  Should it instead recover, they will be walloped by higher debt-financing costs. The greatest risk to EM financial stability this year may not be a hawkish Fed but a disappointingly dovish ECB.

Written By
Other Writer
More from Other Writer
“Everything about recent experience,” Paul Krugman says, “suggests that the world desperately...
Read More

0 replies on “Emerging Markets Fear Yellen, But Need To Keep Their Eye On Draghi”