Let’s get one thing out of the way. This is not a move towards free markets. Whether the Fed sets interest lower, or whether it sets interest higher, we still have central planning. We still have price fixing of interest rates.

Interest rates may be set too low. However, forcing interest up is no cure. We need to eliminate central planning, and move to a free market in interest. This is impossible in our present monetary regime.

Anyway, given the system as it is, the Fed is going to have to take back this interest rate hike. Here is Exhibit A of our case: a graph of the 10-year US Treasury bond yield. 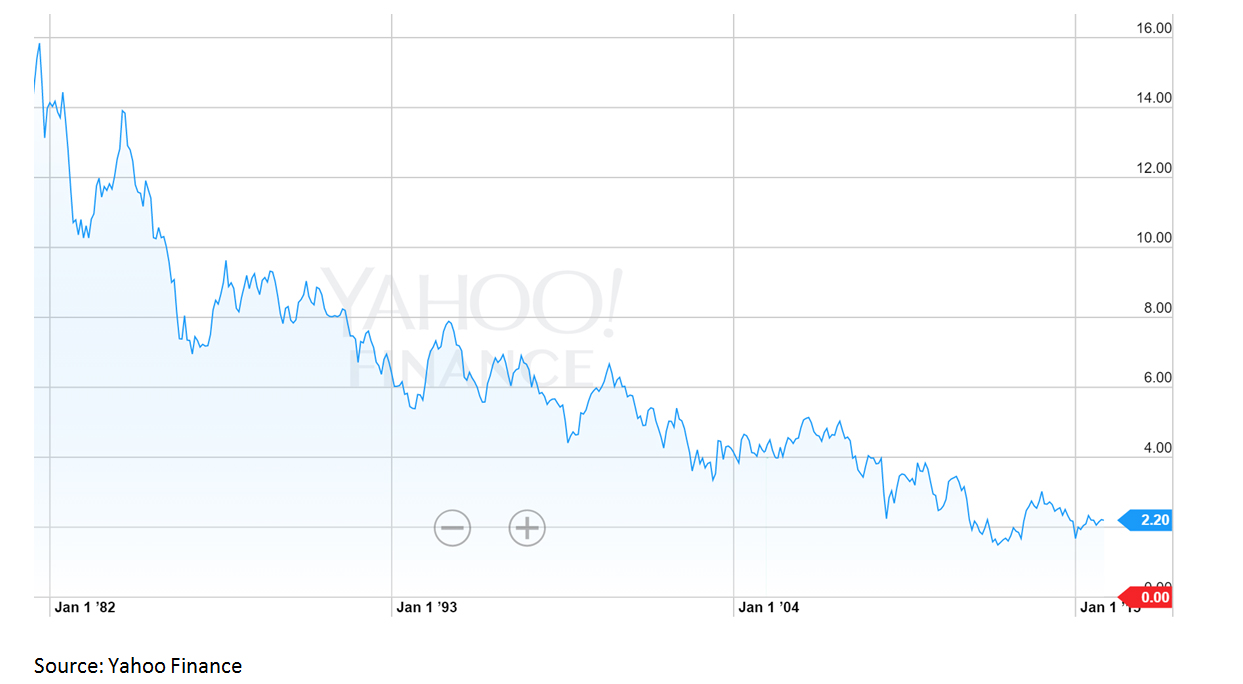 At least the US dollar still has interest. Switzerland, and several countries in the European Union, don’t. Their currencies are drowning under the zero line. For example, the Swiss government 10-year bond takes 0.16% per year from lenders. That’s right, if you fork over your francs to buy that bond, you get back less at the end. Germany is little better, with their five-year bond charging investors 0.1%.

The global trend for over three decades has been falling interest. The yield on the 10-year Treasury even fell after the Fed’s announcement. Yellen thinks to fight this megatrend, but that’s absurd. Let’s look at why.

The process that sets the interest rate is complex. I have written many words on its terminal decline. However, there are two simple reasons why the trend remains downward.

To understand this, consider the simple example of buying a house. Only, you don’t get a normal mortgage. You get a balloon loan due tomorrow morning. Every day, you have to borrow anew. This would be crazy for an individual homeowner to attempt.

However, it’s what banks do. They risk an increase in their cost of funding. That would be a problem, because the interest they receive on their bonds is fixed.

The problem isn’t just reduced cash flows. When the cost of funding goes up, some bondholders are obliged to sell bonds. That causes a drop in the price of bonds, and all bondholders take capital losses. With reduced capital, banks have to cut back on lending. Funding to business is reduced, and there can be a recession.

Two, falling interest has driven down the yields of stocks and real estate. This has been a process of borrowing ever more, of going deeper into debt. What else should we expect people to do, with ever cheaper cost to borrow? They borrow, to increase their leverage, to own more assets. At least, there are more assets in dollar terms. But remember, prices are rising in this process, so there aren’t necessarily more assets in reality.

Picture both assets and liabilities rising together. It is a ratchet, that cannot go backwards. Any significant interest hike causes the prices of all assets to drop. That turns many balance sheets upside down. For some, liabilities exceed assets. Their bankruptcies lead to liquidations, which causes further asset declines. Assets must be sold, but no one can get funding to buy them, and everyone’s balance sheet is under stress.

Janet Yellen will want to avoid this catastrophe. She won’t want to be remembered as the Fed Chair who caused a repeat of 2008. She will find that it’s easier to take another hit of financial heroin. Interest rates will go down.

Written By
Keith Weiner
More from Keith Weiner
We have spilled many electrons on the topic of capital consumption. Still, this...
Read More

0 replies on “Janet Yellen Fights the Tide of Falling Interest”