At the end of January the Bank of Japan (BoJ) shocked the financial markets by announcing that they would allow Japanese interest rates to become negative for the first time. USDJYP reacted with an abrupt rise from 118 to 121 which was completely reversed a global stock markets declined USDJYP is currently at 112.06 (11-02-2016). The three year chart below shows the extent of the move:- 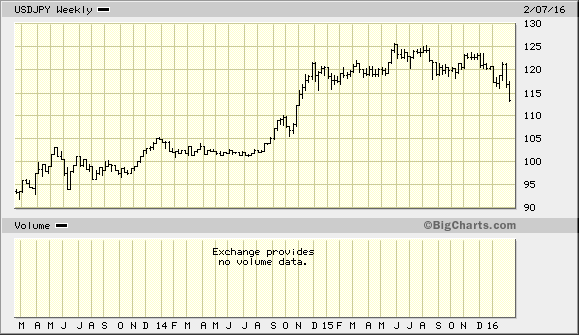 Here is an extract from the BOJ Announcement:-

The Bank will apply a negative interest rate of minus 0.1 percent to current accounts that financial institutions hold at the Bank. It will cut the interest rate further into negative territory if judged as necessary.

“QQE with a Negative Interest Rate” is designed to enable the Bank to pursue additional monetary easing in terms of three dimensions, combining a negative interest rate with quantity and quality.

The Bank will lower the short end of the yield curve and will exert further downward pressure on interest rates across the entire yield curve through a combination of a negative interest rate and large-scale purchases of JGBs.

The Bank will achieve the price stability target of 2 percent at the earliest possible time by making full use of possible measures in terms of the three dimensions.

In answer to the title question, part of the surprise was due to BoJ Governor Kuroda-san’s volte face. Prior to his departure for Davos, he had ruled out the adoption of negative interest rate policy (NIRP) upon his return the BoJ announced the NIRP “out of the blue”.

I was also surprised, not that the BoJ had adopted NIRP, but that it had taken so long for them to “fall on their sword”. After all, they have been struggling with deflation and low bond yields for more than a decade and embarked on QQE ahead of their collaborators at the ECB, SNB, Riksbank and Danmarks Bank. The Economist – Negative Creep – makes some important observations:-

Almost a quarter of the world’s GDP now comes from countries with negative rates.

… Not so long ago it was widely thought that, if interest rates went below zero, banks and their depositors would simply switch to cash, which pays no interest but doesn’t charge any either. Yet deposits in Europe, where rates have been negative for well over a year, have been stable. For commercial banks, a small interest charge on electronic deposits has proved to be bearable compared with the costs of safely storing stacks of cash—and not yet onerous enough to try to pass on to individual depositors.

That has resulted in an unavoidable squeeze on profits of banks, particularly in the euro area, where an interest rate of -0.3% applies to almost all commercial-bank reserves. (As in Switzerland and Denmark, Japan’s central bank has shielded banks from the full effect by setting up a system of tiered interest rates, in which the negative rate applies only to new reserves.) If interest rates go deeper into negative territory, profit margins will be squeezed harder—even in places where central banks have tried to protect banks. And if banks are not profitable, they are less able to add to the capital buffers that let them operate safely.

Perhaps the answer lies in the transient influence NIRP had on the value of the JPY. The Yen had risen quite sharply amid repatriation of risk assets during the first weeks of January, the BoJ announcement stemmed the tide briefly, until the flood resumed. The move beyond Qualitative easing – which provides “permanent” capital but does not make its presence felt to the same extent – should have caused the Yen to recommence its secular decline. With the liquidation of asset flows dominating the foreign exchanges the BoJ’s action was like a straw in the wind. Negative rates may be instantly recognizable whilst the purchase of common stock is masked by the daily ebb and flow of the stock market, but when investors are exiting “pursued by Bear” central bankers need to act with greater resolution – in time I expect the BoJ will adopt a more negative stance.

In the longer run NIRP will reduce the attractiveness of the Yen, which brings me to a second question – is NIRP is more or less damaging, to the economy, than the QQE which has gone before? I am assuming here, that QQE, like all the forms of quantitative easing to emanate from the coffers of the major central banks, is inherently damaging to the economy because these policies artificially lower the rate of interest, leading to malinvestment. This destroys long run demand by reducing the return on savings – especially important in a country where the population is rapidly aging. More pensioners with less income from their savings, more workers with inadequate pension provisions due to low interest rates and more defined benefit pension funds at risk of default due to insufficient funding of their liabilities. An added twist to this sorry situation is the propensity for unprofitable businesses to continue to operate, inexorably dragging down productivity. These are just a few of the unintended consequences of engineering interest rates below their natural level.

In the past I have been bullish for the Nikkei on a currency hedged basis. The five year chart below shows the relative performance versus the Eurostoxx 50 over the last five years:- 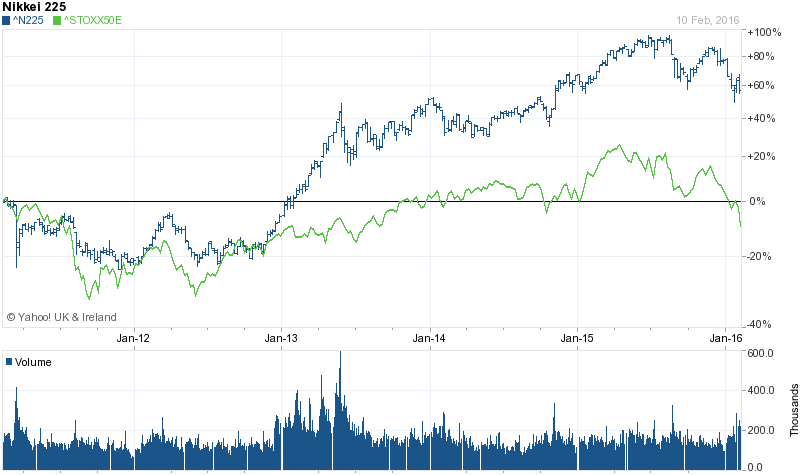 Long Nikkei 225 hedged may still prove a positive strategy, although the up-trend appears to have failed in the near term, but I believe, in the long run, under the BoJ – “QQE with NIRP” regime, the best trade will be to short the Yen. Again, the near term the trend is unfavourable – repatriating capital flows may be the driving force – when the capital flows subside, the “Emperor” will be seen to have “less than zero” clothes. The Yen should run into resistance around 110 and again at 105 – keep your powder dry.

10yr JGBs yields nudged into negative territory this week, whilst the 40yr maturity has backed up from 1.12% to 1.23% over the past seven sessions. That may not seem much of a return, but longer dated maturities are likely to offer increasingly attractive carry potential as market participants attempt to establish the “limit of NIRP”. JGB futures offer a reasonably clean way of participating in any upside whilst hedging the majority of your currency exposure in either direction. You may be late to the trade, however, as the eight year, monthly yield chart below reveals:- 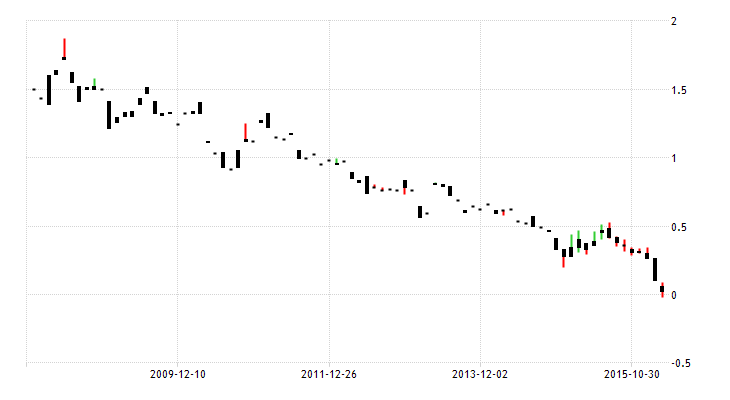 0 replies on “Why did Japanese NIRP cause such surprise in the currency market and is it more dangerous?”