The yearly growth rate of real gross domestic product eased to 1.9% in Q4 from 2% in the previous quarter.

Using our large scale econometric model we can suggest that the yearly growth rate of GDP could fall to 1.7% by Q3 before bouncing to 2.4% by Q4. By Q4 next year we forecast also a figure of 2.4%.

Other latest data portrays a mixed picture of economic activity. The yearly growth rate of durable goods orders jumped to 1.8% in January from minus 0.1 in the month before.

Meanwhile the Kansas Fed manufacturing index fell to minus 12 in February from minus 9 in January.

Furthermore, Conference Board’s consumer confidence index has weakened in February from January with the index falling to 92.2 from 97.8.

Changes in various indicators by themselves do not provide the information about the underlying reason for these changes. In our writing we have suggested that the key is the state of the pool of real wealth.

Since October 2011 the yearly growth rate of our measure of money AMS has been following a choppy declining trend. We hold that this is undermining various bubble activities, which sprang up on the back of past strong monetary rises.

Whilst the declining trend growth in money supply is bad news for bubbles, it is actually great news for wealth generators since the pace of wealth diversion from them is slowing down. On this score a bust of bubble activities plants the seeds for a genuine economic growth. For the time being, we suggest that the process of cleansing is still in force.

We hold that on account of the fact that the lagged effect from changes in money to changes in various activities could be very long and variable with respect to its effect on various markets, it shouldn’t come as a surprise if some activities currently tend to show strengthening whilst other are weakening. 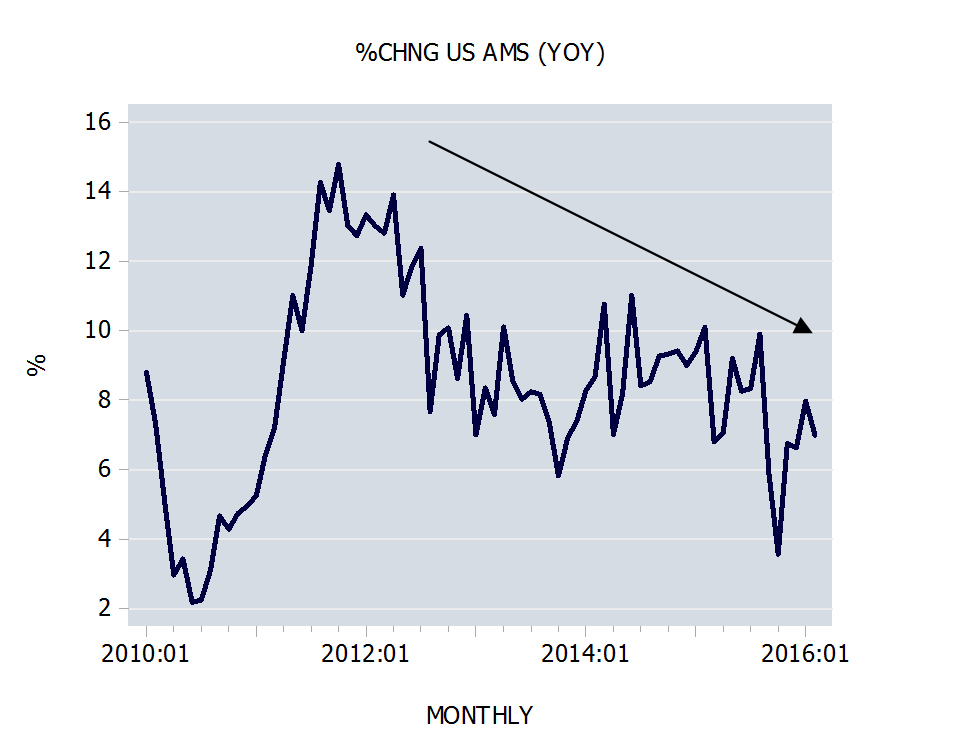