For the past four years, bond traders have quickly turned their focus after Federal Reserve meetings to something called the dot plot (seen as a key insight into their collective thinking on rates). The problem is, as Bloomberg exposes, the forecasts weren’t very good… and fund managers are increasingly ignoring the dot plot for investment decisions, as one strategist exclaimed “we don’t put a lot of credibility in the dots, [officials] have usually been cheerleaders for the economy, and they get turning points in the economy wrong.”

The waning influence of the Fed’s projections is showing up in derivatives markets. After the December revision to the projected path of interest rates, traders responded much less than they did earlier in the year in the market for derivatives known as overnight-indexed swaps. 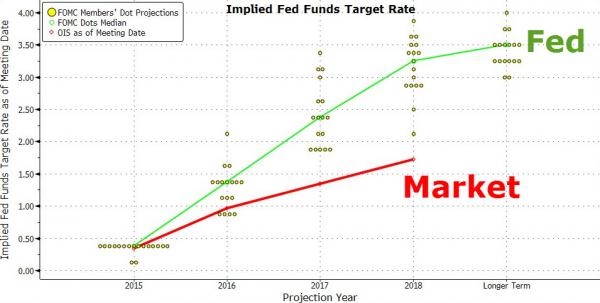 As Bloomberg reports, market reaction to changes in the dot plot, once pronounced, has become more muted in recent months and investors at firms including Pacific Investment Management Co., BlackRock Inc. and Aberdeen Asset Management say they won’t take the Fed’s projections at face value when they’re updated Wednesday at the end of a two-day policy meeting.

If the Fed is aiming to prepare the market for three or four rate increases this year, after officials in December projected four, traders aren’t buying it.

Aberdeen’s Maldari said he started questioning the economic projections in Fed statements in July, when the central bank inadvertently released confidential staff economic projections that implied rates should rise to 0.35 percent by the end of 2015, rather than the 0.625 percent implied in the most recent dot plot at that time.

“That tells me they are thinking one thing and saying something else,” he said.

Either way, as investors prepare for the Fed’s March 15-16 meeting, they think the policy statement and Fed Chair Janet Yellen’s press conference will attract most of the market’s attention. Clarida, of Pimco, expects the median Fed official’s projection will be for three interest-rate increases this year.

“Almost certainly, the 2016 dots will shift down,” Clarida said.

But “if they mark down 2016 to one hike, that would be a surprise. It would also be negative for stocks and credit spreads,” since investors would take that as a sign the economy is weaker than expected.